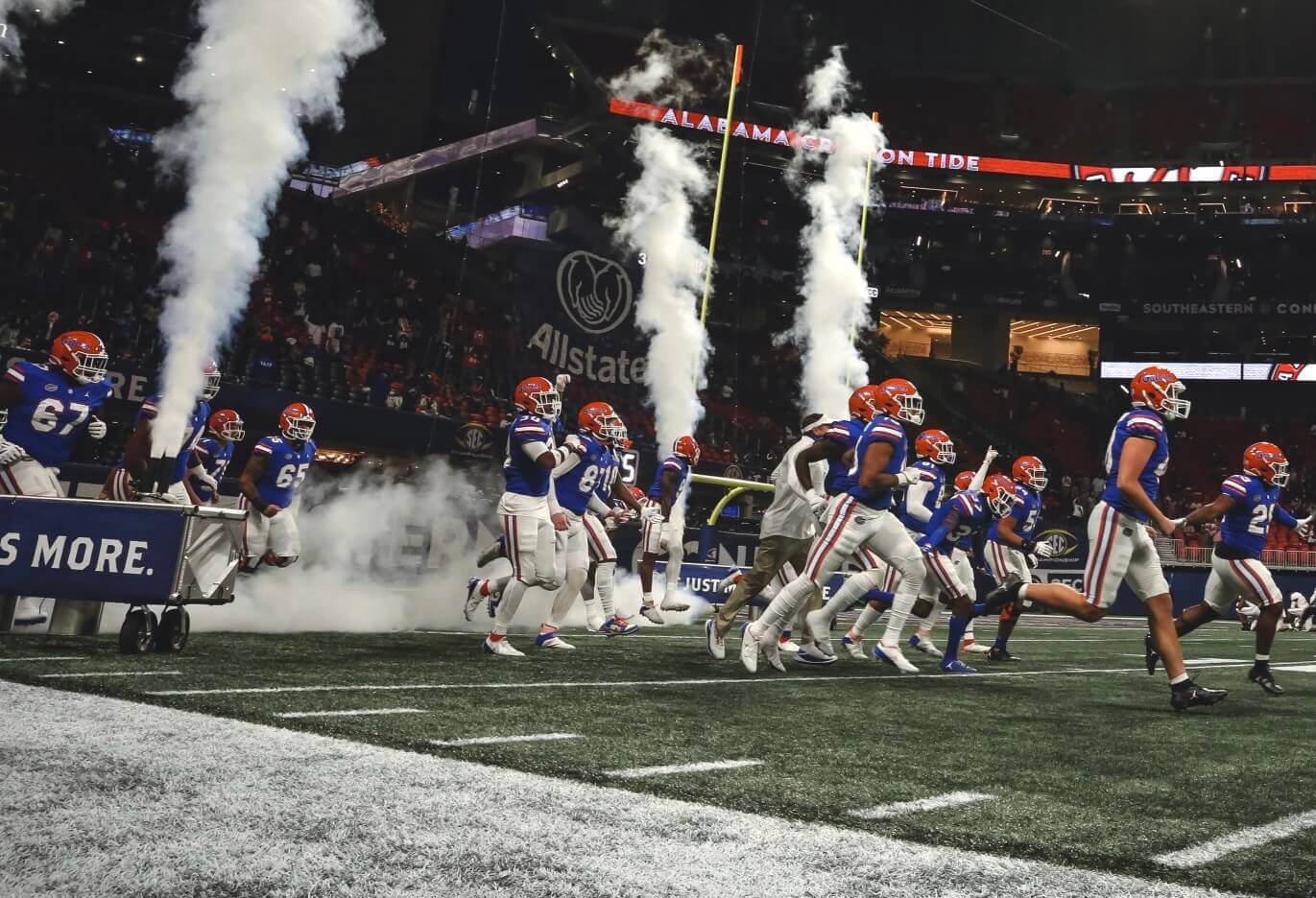 With the Florida Gators’ 2021 schedule released yesterday, I thought it would be worth taking my first shot at what’s become fans’ favorite offseason ritual: projecting Florida’s record. And in order to have a final record projection, you have to go game by game in order to see who the Gators will beat and lose to, right? So here we go:

It took until his fourth year as a head coach in the Sunshine State and his second job, but Willie Taggart is finally going to make his first appearance in the Swamp. FAU was scheduled as the season opener for a reason, though, and that reason was to give the Gators some confidence by taking a less talented team to the woodshed. Despite heavy personnel losses on offense, there’s no reason to think the Gators won’t do exactly that against a school that’s left to clean up the scraps that Florida, FSU, Miami and out-of-state raiders are so gracious to leave them on the recruiting trail.

You can more or less copy and paste the latter half of the FAU synopsis for USF, albeit in a unique road-but-not-really-true-road environment in Tampa. The Bulls are in a bad way, though, having gone 0-for-the-AAC in 2020 and getting walloped 52-0 by Notre Dame as an added bonus. They promise to be little better in year two of the Jeff Scott era. But don’t feel too bad for them, because this is what USF wanted. With two-for-ones against Florida, Notre Dame, Alabama and Miami on their schedule throughout the 2020’s, they’ll get all the TV exposure they could have asked for in the coming decade.

So much for easing into the conference slate as the Gators used to do with Tennessee and Kentucky. This year, the SEC opener is against big, bad, Bama. Two pieces of good news for Florida: the Tide have to replace even more offensive production from 2020 than Florida does, and they do have to travel to Gainesville. How quickly Bryce Young and Emory Jones can step into the starting QB roles at their respective schools will go a long way to determining the winner of this one, and if the Gator defense just can take the step from “the worst Gator defense of all time” to “just plain bad” by week three, this one could be fun. But at the end of the day, I simply don’t trust Todd Grantham’s defense to get the stops they need.

Florida’s football program may be facing a great deal of short and long term questions at the moment, but if you’re in a glass-half-full kind of mood, consider this: at least Florida isn’t where Tennessee is right now. The Vols just had to rush a coaching search after firing Jeremy Pruitt in disgrace, and that ended with new AD Danny White bringing Josh Heupel along from Central Florida with him. Now Heupel has to deal with so many players looking to transfer that it’s hard too even project who will suit up for the Vols in spring ball, let along in the fall. After a rough game the week prior, Emory Jones goes berserk on a depleted Tennessee defense.

Ever since Mark Stoops arrived at Kentucky, the Wildcats have developed a tendency to give the Gators problems- particularly on their home turf. Florida has won the last three games in Lexington by a combined fourteen points, and trailed by double digits in the last two. So yes, this game does spell trouble for the Gators, even without Terry Wilson- the only quarterback to lead Kentucky to a win over Florida since 1986. But with Lorenzo Lingard and Demarckus Bowman now in the fold alongside Emory Jones, Florida should be able to wear Kentucky down on the ground for the better part of four quarters and then put them away late.

If you think Tennessee is in bad shape, I raise you the Vanderbilt Commodores. Vandy’s roster was so depleted last year that they barely had enough scholarship athletes to field a team… and one of them was a women’s soccer player. That roster suffered arguably the worst season in school history, going 0-9 and with six of those losses coming by three touchdowns or more. Clark Lea comes over from a successful run as Notre Dame’s offensive coordinator, and he might be able to fix things eventually, but he’s in for a rude awakening in his maiden voyage. Florida comes back home and rolls.

It’s impossible to believe that LSU will be as top-to-bottom awful as last year… and yet that top-to-bottom awful LSU team came into the Swamp and beat Florida on Senior Night. There was no reason to believe that result existed in the realm of possibility, but it happened. So I’m invoking the Casey Rule here, which basically states that this rivalry has seen too many things go against Florida that were not predictable by a rational individual to believe that the Gators will beat LSU until they actually do it. Emory Jones plays well, but Florida’s defense implodes down the stretch and gives it away with a busted coverage late.

Time for the big one. I really do think that with JT Daniels, Georgia would have beaten Florida last year because he would have hit throws against a beaten Gator secondary that D’Wan Mathis and Stetson Bennett IV missed. But that said, I also don’t think it’s possible for a Gator defense to be that completely clueless for two straight seasons. And Georgia has some holes to fill across its defense. Florida probably won’t be able to stop what should be another sound Georgia rushing attack led by Zamir White, but maybe they can outshoot the Dawgs. Call this a leap of faith, but I’m picking this as the game where Emory Jones breaks through and notches his first signature win as the Gator quarterback with a game winning touchdown in the final moments.

Florida will be feeling good about itself after a big win in Jacksonville, and that might be a concern if they faced a team better equipped to catch them napping than South Carolina. But Will Muschamp left a mess for Shane Beamer to deal with, as the Gamecocks could be looking at 1-7 or 2-6 in the SEC in his first season. Losing both starting corners in Jaycee Horn and Israel Mukuamu- the only notable pieces of their defense- is as good as a death sentence in 2021. Perhaps Florida does have an emotional hangover for this one, but against a team as thoroughly devoid of talent as South Carolina is, it’s not going to matter. Xzavier Henderson and Justin Shorter both break out with big games against a green Gamecock secondary as the Gators roll.

Crazy as it may seem, the FCS really does seem to be going ahead with their 2020 season in the spring of 2021… and then their 2021 season in the fall of 2021. So there’s not much data to gauge Samford by except for the fact that they were paid a large sum of money to play Florida in the Swamp, and the fact that they don’t recruit from the same pool of talent that the Gators do, and the fact that in their most recent season (2019), they were 5-7 in the FCS’s Southern Conference. Which is enough for me to think that not even 2020 LSU level apathy from Florida could make this a game. Gators win big.

If there will come a game where the Gators get sloppy against a lesser opponent and throw their entire season away with a letdown game, this is it. As anybody who made the trip to CoMo in 2019 knows, late November in Missouri is cold, which turns the ball into a rock and completely alters the game plan. Seeking a statement win in year two of Eliah Drinkwitz’ tenure, and perhaps still simmering over the brawl in Gainesville, Mizzou comes out ready to play with a much improved defense and springs the upset, handing the SEC East back to Georgia despite their loss in Jacksonville.

As I believe is the case with LSU, FSU simply has to be better in 2021 than in 2020. Thanks to the transfer portal and a real offseason, Mike Norvell will have more talent that will undergo more offseason reps to shake off more of the rust just has to result in a better football team than the 3-6 mess from a year ago. That said: the Seminoles are still nowhere near ready to compete with the likes of Florida, a team that will have just seen its dreams of a return to Atlanta die and will be out for blood. For all his struggles against mediocre teams, Dan Mullen treats this game like a national championship. FSU will put up a fight, but the overall talent disparity takes its toll in the second half and Florida runs away with it.

SEC East projection: Florida goes 5-3 in the SEC with losses to Alabama, LSU and Missouri. They will beat Georgia in a mild upset in Jacksonville, but the Bulldogs have a much easier schedule that, under this scenario, would require them to lose two additional games in order for Florida to win the SEC East. I’ll say Georgia goes 6-2 with an additional upset loss to Auburn on the Plains, but Kirby Smart’s team won’t lose again and claims the East with two losses. That places Florida in a second place tie with Missouri at 5-3 in the league, and the head to head loss in CoMo would give Mizzou the tiebreaker… for whatever that’s worth.

Bowl projection: This very well could be the first year under Dan Mullen that Florida doesn’t make a New Year’s Six Bowl. But it’s important to remember that historically, the CFP Committee has viewed the SEC as a dominant league, and doesn’t punish teams for losses to good teams. So losses to Alabama at home and what I’m projecting to be a much better LSU team on the road won’t damage the Gators’ CFP ranking much. And the CFP Rankings dictate those New Year’s Six Bowls. So I’ll say Florida slips into the New Year’s Six as the final at-large selection, finishing the season ranked #11 at 9-3. As that last at-large team, Florida gets shipped across the country and faces the upstart Washington Huskies in the Fiesta Bowl.