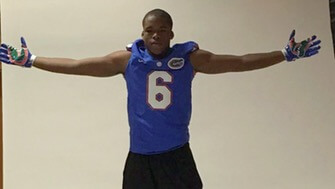 Burney is the type of player who can make an immediate impact in Gainesville. He runs a 4.38 40 yard dash, and combines that speed with great play recognition and the ability to always make the sure tackle for you. He also has the skill set to make a difference on offense, as he plays a bit of wide receiver in high school and can make defenders miss in space. If nothing else, I’d be surprised if he doesn’t get a look as a return man.

The addition of Burney gives Florida its seventh commit of the 2018 Class, and its third defensive back after safety CJ Smith and corner Divaad Wilson. Don’t be fooled by its small size, though, (and I know some are) because there are still eight months to go until Signing Day, and Florida is looking very strong for several of its other top targets in this class, such as Jacob Copeland, Richard Gouraige, Tyreke Johnson, William Barnes and Asa Martin. Landing any one of those guys would be considered a tremendous pull for Florida, and it’s not unrealistic to say that they’ll probably wind up with several of them. So while grabbing Burney was nice, it may end up as just being the first domino to fall.