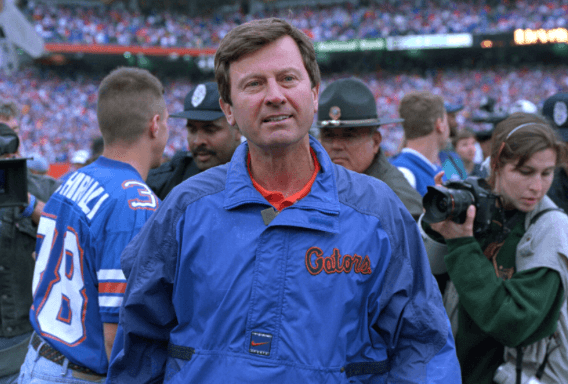 It may not be in the fashion thousands of fans had hoped for after the Gators’ puzzling loss to Mississippi State in 2004, Urban Meyer’s sudden retirement in 2010, or the loss to (insert opponent and date in 2013 or 2014 here) under Will Muschamp. But the Head Ball Coach is- at long last- coming home.

In what’s probably going to be his last big move as athletic director at UF, Jeremy Foley has announced that Steve Spurrier will return to Gainesville as the Gators’ newest “ambassador and consultant.” Spurrier served in a similar role at South Carolina after his mid-season resignation a year ago, but, well, he just couldn’t pass up the opportunity to return to his old stomping grounds.

So, what exactly does it mean for Spurrier to be an ambassador and consultant? According to Scott Carter of FloridaGators.com, “Spurrier’s duties include serving as a mentor to UF coaches, as a representative at Gator Booster functions, as a bridge between former players and the school, and other roles yet to be determined.” If nothing else, it’s a phenomenal recruiting tool to have someone like Spurrier still around the stadium named after him. And you can bet that Jim McElwain won’t hesitate for a moment to enlist the assistance of the Head Ball Coach when he needs guidance.

Spurrier, for those of you who don’t know, is something of a legend. He’s the only person in college football history to ever win a Heisman, coach a player to a Heisman and coach a team to a national championship. Oh, and he took a Florida program that had done nothing in its first 80 years and turned it into a dynasty, winning the aforementioned national title plus six SEC Championships, and guiding them to ten top ten finishes in his twelve years.

2 thoughts on “The Head Ball Coach is coming home: Steve Spurrier returns to UF as Ambassador”