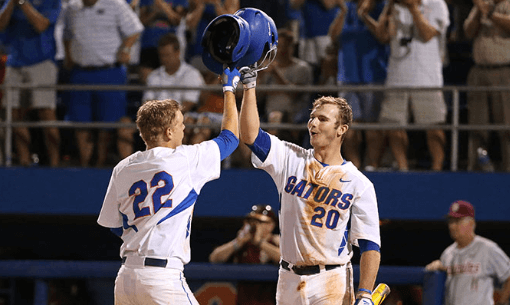 Yet as their female counterparts on the softball team will tell you, so far.

A school record number of regular season wins (44) and a near school record for total wins (50) ultimately mean nothing for the Gators’ top ranked baseball team. Despite getting to the Super Regional stage in a more dominant fashion than most other, they’re nonetheless thrown into the same pile as 15 other college baseball teams across the country. Win two games this weekend, and it’s onto Omaha. Lose, and the season is over.

Most people reading this probably know it in principle: any team can beat any other team on any given day. It’s become one of the most overused sentences in sports, particularly by fans of underdogs. But all it would take is Florida’s bats to go dormant against FSU for two games, and this cliche would become reality for the Gators.

In the three regular season games, Florida’s offense battered and bruised FSU pitching in 6-0, 3-2 and 8-2 victories. The Gators collected 26 hits in those three games combined, including four homers. I suppose this is the time to issue the standard reminder that these stats came against midweek pitchers (meaning, not FSU’s top three starting pitchers) and that Florida will now face FSU’s best pitching this weekend. Then again, that cuts both ways; FSU was held to just four runs in three games despite not facing Logan Shore, AJ Puk or Alex Faedo.

And it isn’t like FSU has a Major League rotation to throw out in the Super Regionals, either. FSU’s got a large quantity of pitchers, but their three most used starters- Cole Sands, Drew Carlton and Mike Compton- have an average ERA of 4.50. Tyler Holton has gotten more work recently as a starter, and he turned in a pair of solid performances against Miami (once in the regular season finale and once in the ACC Tournament) and one against Southern Miss in Regionals last week. The Noles also have a solid bullpen, featuring twin brothers Jim and Ed Voyles and Tyler Warmoth.

But the Gators have already faced the best pitchers they’re going to see all year in Alex Lange (LSU) and Anthony Kay (UConn). That makes the key to the series- how well they hit- something fans can feel a little more comfortable about.

In last year’s Super Regional, both FSU starters were chased out of the game by the start of the fourth inning. Florida set the tone early with homers by Richie Martin and JJ Schwarz, and put FSU in a pair of holes they could never get out of. Florida hitters would sit back and almost always take the first pitch, unless it was in their wheel house… in which case they’d send it into Dade County. The plan was to work the pitch counts high and force the pitcher to make three straight “pitcher’s pitches” in order to get the hitter to swing at one. This strategy worked to the tune of 24 runs in two games.

The game plan this year is the same. Gator hitters need to be patient at the plate, wait for mistake pitches and then crush them. With two strikes, the game plan obviously shifts to “protect” but Florida needs to force FSU pitchers to get two strikes on them with two well placed pitches that are hard to get the barrel of the bat on. It’s going to take quite a bit of effort and concentration for any of the pitchers FSU will throw out this weekend to be able to make three such pitches per batter, and quite frankly, I doubt any of them are capable of doing it more than once or twice.

If you’re not familiar with the game of baseball… well, no, this strategy isn’t foolproof because the game isn’t that simple. Anybody who watches baseball knows that good pitchers are able to fool batters with speeds and locations they aren’t expecting. What looks like a fastball right down the middle could suddenly dip down and away, and while hitters may think they’re teeing off on a mistake pitch, they’re instead grounding out weakly to second and help the pitcher move through innings while throwing fewer pitches. But these Gator hitters are among the best in the country, meaning they’re able to detect movement better than most.

I’m pretty confident that the Gators’ pitching staff will collectively silence FSU’s offense. Jackson Lueck, John Sansone, Quincy Neiporte and Taylor Walls are all solid hitters, but I’d love to see them try to barrel up on any of Logan Shore’s pitches. Or AJ Puk’s. Or Alex Faedo’s, if it even gets to a game three. As for the inverse matchup, I’m also confident that the Gators’ Buddy Reed, Peter Alonso, Jonathan India, Deacon Liput and Mike Rivera will be be selective at the plate and take advantage of misplaced pitches. It’s just a matter of being patient.

And if they are, their patience will be rewarded with something they’ve undoubtedly awaited for most impatiently: a return trip to Omaha.