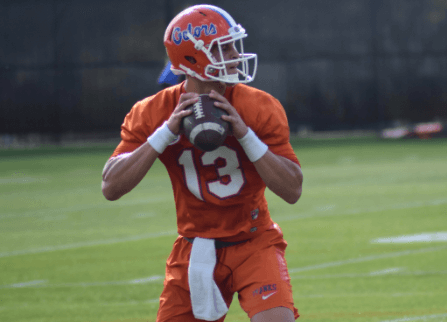 The story of Kyle Trask is a very nice one, from whatever angle it gets told.

Despite seemingly possessing all the tools to be a big time quarterback, Trask never started at his high school in Manvel, Texas, which resulted in a complete lack of interest from Division I schools. Florida was the only FBS school to even offer him a scholarship, and Trask quickly proved to be more than worthy of that scholarship- if for no other reason than for depth at the game’s most important position- by demonstrating a calm, cool demeanor in the limited reps he got in practice. That in itself is more than most quarterbacks who sit on the bench for the duration of their high school careers can say about their college careers. It’s an anecdote that reads, “good for him,” essentially.

But make no mistake. The quarterback job is Feleipe Franks’ to lose as of right now.

The film I’ve seen of Trask from this spring paints the picture of an intelligent kid who makes good decisions and is often pinpoint accurate, yet at the same time doesn’t do anything spectacular. But that probably sounds familiar, and not in a good way (here’s a hint: Luke Del Rio). By contrast, Franks has grown from a young gunslinger into a bona fide playmaker. Every now and then he’ll make a mistake, but those mistakes are becoming far less frequent and less egregious in nature than they were last spring.

Franks had never left anybody who watched him with any doubt about his physical capability, but now, for the first time, he seems to be putting it all together. Instead of trying too hard to do something incredible on a play that is breaking down, Franks has learned the value of playing smart. He’s seen what happens when he tries to fire every ball 110 mph, or magically connect with his primary receiver when four defenders are in the vicinity. He’s watched the same balls get picked off or sail over everybody’s heads time and again, and he’s heard the same things from McElwain and Doug Nussmeier. Perhaps it took a little longer than some would like, but he’s learned.

Instead, film I’ve seen shows a more confident kid that’s just as happy to hit Brandon Powell in the slot for a four yard gain as hitting the home run to Antonio Callaway. Franks no longer hesitates when he sees somebody other than his primary option open, as he knows that if the defense continues to give him intermediate routes, he’ll be in the end zone soon enough anyway. (Mac literally yelled that at him once last year after lofting an arm punt to Marcus Maye.) And in the situations where nobody is open, Franks is beginning to grow more comfortable with taking off or throwing it away- a big step up from scrambling around to buy time and then go deep.

In addition, his mechanics, which were a mess as recently as last spring, have improved exponentially. His footwork was clumsy and highly inefficient; though in most cases he could get away with it due to his powerful arm in high school, he started running into trouble with that in practice at UF when the faster athletes on defense would take advantage and jump his passing lanes. Now, his footwork looks much cleaner… granted, he hasn’t stepped foot on the field for a real game yet, but it still looks like a totally different player. Franks has cleaned up his throwing motion, too, tightening it up and getting rid of a small hitch in his windup to create a much quicker delivery- another weakness defenders used to take advantage of.

Finally, everything about him just says “leader”. He seems to have developed great chemistry and timing with his wide receivers, and he’s a vocal guy in the huddle. On the decreasingly frequent occasions when he makes a mistake, he no longer looks like a deer in headlights and doesn’t let it haunt him on ensuing reps. And he’s a very likable guy off the field to top it all off.

He just looks like “The Guy,” period. Trask looks to be a solid backup option, and incoming freshman Jake Allen will almost certainly make a push when he arrives this summer. But barring injury or an unforeseeable off field incident, I’d be very surprised if he doesn’t get the nod against Michigan.

One thought on “Spring practice notes: QB job is Feleipe Franks’ to lose”