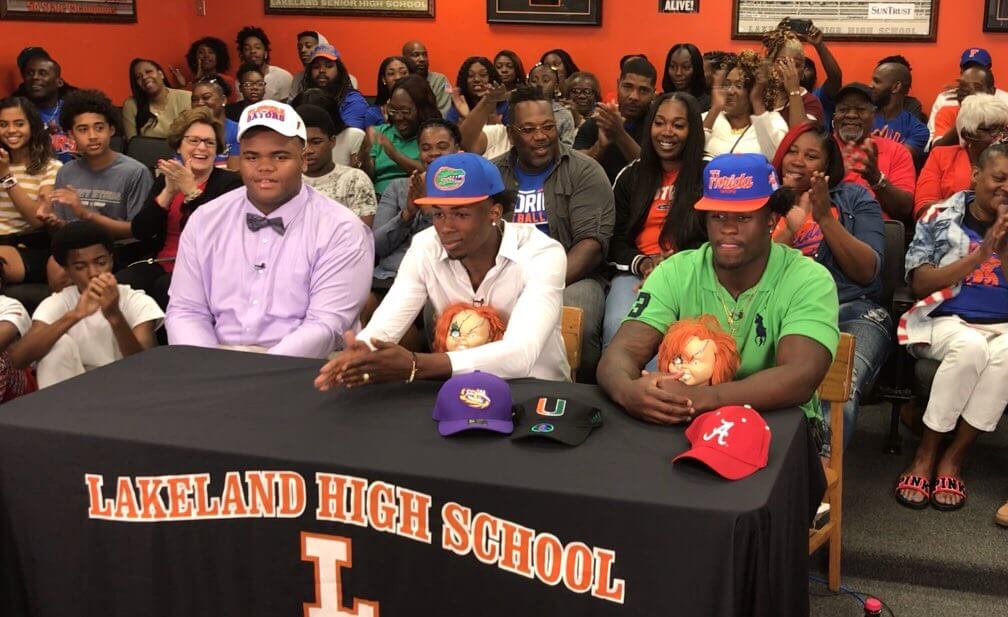 Over the years, the Florida Gators have established quite a pipeline between Gainesville and Lakeland High School, pulling in Lakeland Dreadnaughts such as Ahmad Black, Chris Rainey and the Pouncey twins. Today, they reaped the benefits of that pipeline to the tune of three more Dreadnaughts-turned-Gators to make an already respectable class into a very good one.

First, there was offensive lineman Deyavie Hammond, who chose Florida over in state rival FSU. Hammond, who also boasted offers from Alabama, Oregon, Georgia, LSU, Texas A&M and Auburn, is a mammoth of a man who should only continue to get stronger under strength and conditioning coach Nick Savage. His combination of quickness, size and strength could see him start next year on an offensive line that will have to replace at least three, maybe four starters.

Minutes later, defensive end Lloyd Summerall selected Florida over Miami. Summerall, who also had offers from Alabama, Michigan, Ohio State, FSU and LSU, is a freak of nature athlete who can play both on the line of scrimmage and as an outside linebacker, a perfect fit for Todd Grantham’s hybrid BUCK position. Summerall was intrigued by the way Grantham utilized Cece Jefferson, Jachai Polite and Jabari Zuniga, and like Hammond, is likely to play right away.

Completing the trifecta was tight end Keon Zipperer. Like his teammates, Zipperer- who also had offers from FSU, Nebraska, Alabama and LSU- comes in at a position of need, with the impending departure of four year contributor C’yontai Lewis. An explosive pass catcher and dynamic route runner, Zipperer is the kind of tight end that you can’t place a tight end on in coverage. If he improves as a blocker, he could be the greatest tight end the school that produced Aaron Hernandez and Jordan Reed has ever seen. His upside is that high.

That hat trick vaulted Florida into the top 20 of every major recruiting ranking system, and it could still climb higher. The Gators are still in the mix for defensive end Khris Bogle and cornerback Chris Steele, both of whom will announce at a later date.

Looking forward: here’s where it’s worth noting the importance of the new early signing day. The Gators already have a tremendous head start on its 2020 class, and aside from Bogle and Steele, now the staff can all but monopolize its attention on continuing to build its next class. 2019 was a very good class, and it can even become a great one pending the announcements of those two, but 2020 is the target date to see Florida start to pull in those unanimous top ten, maybe even top five classes every year. And by pretty much wrapping up the current cycle today, Florida just helped itself in that regard even more.