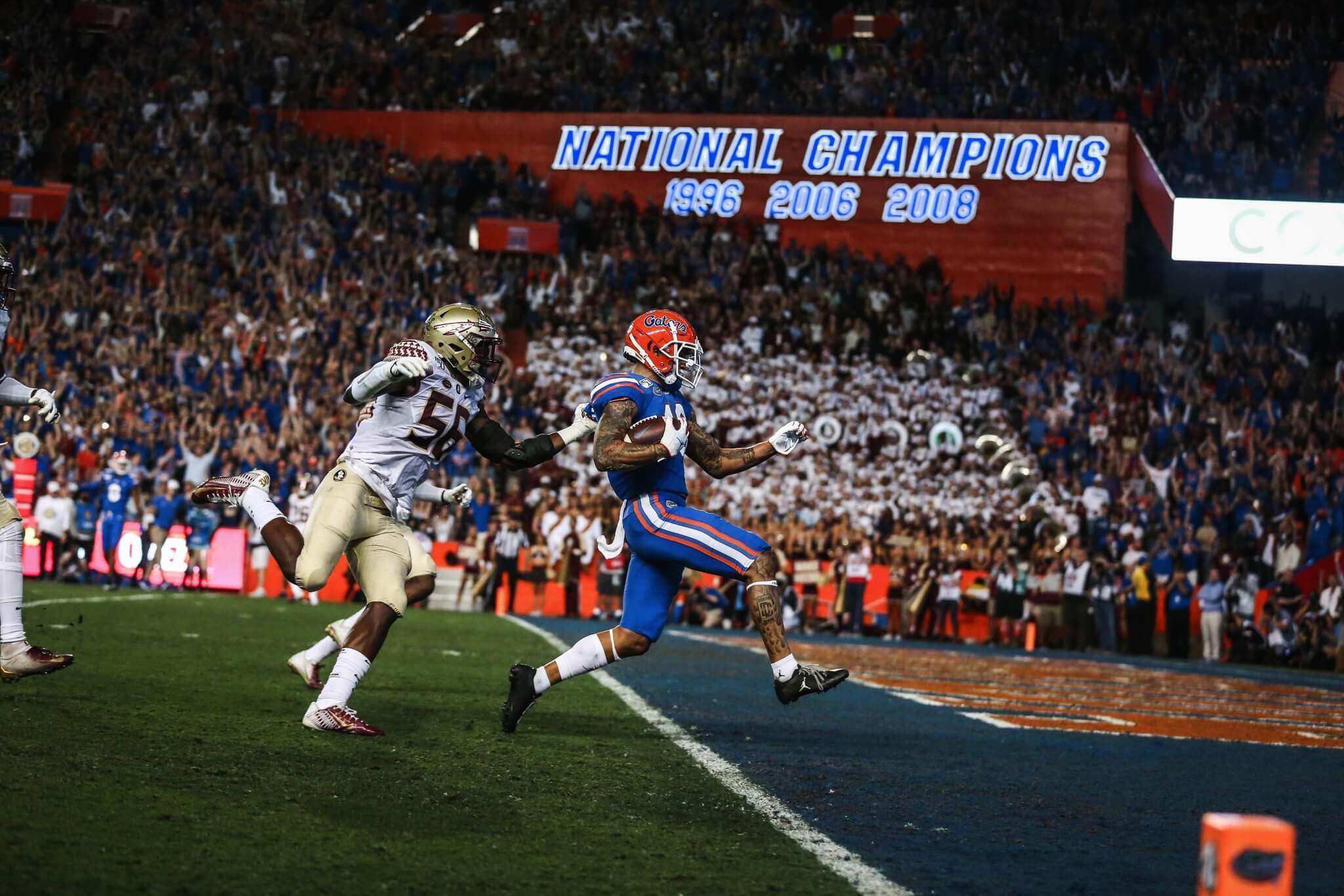 A month ago, the Gators’ national and SEC championship dreams were shattered with a 24-17 loss to Georgia in Jacksonville. The loss left the players vowing to play better and finish strong for a senior class that’s been instrumental in rebuilding the program in Dan Mullen’s blueprint.

On Saturday night, they backed up their vow, gave their seniors one final set of moments on the hallowed grounds of Ben Hill Griffin Stadium and settled for the state title.

Kyle Trask threw for 343 yards and three touchdowns, Gator defenders teamed up to sack Seminole quarterbacks eight times and Florida blasted archrival FSU, 40-17, in the Swamp. The win is Florida’s first over the Noles in Gainesville since 2009, which snaps a four game home losing streak to their cross state rivals, and coupled with a win over Miami back in August, ensures their first “official” state championship since 2008. It’s also the Gators’ tenth win on the year, making Mullen the first Florida coach to ever win double digit games in each of his first two seasons, and completes Florida’s first perfect season at home since 2015.

In a series that’s been owned by the Seminoles for much of the decade, Mullen has quickly reversed the momentum. Combined with a 41-14 drubbing of the Noles in Tallahassee a year ago, Florida has now outscored FSU by an 81-31 margin in Mullen’s two games as head coach. The Gators also improve to 6-0 against FSU with Mullen involved in the game for Florida, as he was the offensive coordinator during the Gators’ wins in 2005-08.

This one could have been even worse, but Mullen elected to call off the dogs midway through the third quarter. His team had made its point.

Dressed in all blue and playing in between newly painted blue end zones, Florida took the opening kickoff and flew right down the field on an 11 play, 75 yard drive that ended with Trask finding Freddie Swain- one of Florida’s many seniors- on a tunnel screen for a 19 yard touchdown. To its credit, FSU countered with a quick touchdown strike of its own, highlighted by a 45 yard strike from James Blackman to Tamorrion Terry on the slant before backup QB Jordan Travis punched it in. But then Florida flexed its muscle and the Seminoles began to wilt.

Trask then led the Gators on another 75 yard touchdown drive, this one taking 13 plays and featuring a 16 yard strike from Emory Jones to Tyrie Cleveland- another of Florida’s many seniors- before Dameon Pierce punched it in from a yard away. Florida kicker Evan McPherson missed the extra point for the first time in his career, but the Gators’ defense promptly forced a three and out. That set up the Gators’ quickest scoring drive of the night, a three play, 85 yard lightning strike that included an insane, bobbing and weaving 47 yard run by Kadarius Toney, a 15 yard bullet to Lucas Krull, and then a swing pass to Swain who took it the final 23 yards for the score and a 20-7 lead.

The teams then exchanged punts as Florida played the field position game, slowly driving FSU backward and forcing another punt that Swain fair caught at the Seminoles’ 40. Trask then put the game away with his third touchdown pass of the night, a lob to the back of the end zone to Van Jefferson (yet another of Florida’s many seniors) to make it 27-7 late in the second quarter. For good measure, McPherson redeemed himself for the missed extra point by connecting on a 50 yard field goal to end the half with Florida up 30-7.

FSU opened the second half by driving deep into Gator territory but then stalling, and having to kick a field goal of their own. Florida replied to that with one more touchdown drive, capped off by Jones hitting Jefferson on the slant to adjust the Gators’ lead to 37-10.

At that point, the game was over, and the party began.

Fans began taunting FSU with mocking renditions of the War Chant, and the arm extension gesture that closely resembles demonstrations of various geometric angles. Kadarius Toney got into verbal spats with Seminole players multiple times in the second half, each of which he ended by merely pointing at the scoreboard. Even Mullen got into it, calling a fake punt to get Tommy Townsend one more moment in his Swamp finale; it failed, but FSU rendered that fact irrelevant by going nowhere and then missing a field goal.

When the dust had cleared, Florida had a 40-17 win over its biggest rival, and the joy of once again owning its biggest rival turned into bittersweetness as players began to realize that they were experiencing their final moments in the Swamp. There was celebration, yes, as “Party Like A Rockstar” blared through the speakers and some players, like LaMical Perine, danced and partied it up with fans. But there certainly seemed to be a ping of sadness among some of the seniors as they soaked in the sights and sounds from the building that they had called home for the past four years.

As the saying goes, though: don’t be sad that it’s over. Rather, be happy that it happened. And in this particular case, “it” was a rebirth of a once proud program that has suffered through some ugly times of late, a return to college football prominence spurred on by a group of upperclassmen who bought into Dan Mullen and his system from the day he was hired.

In other words, what happened was a restoration of the Gator Standard.