Gator Football Report, sources: Florida tested waters with Chip Kelly, and like what they found 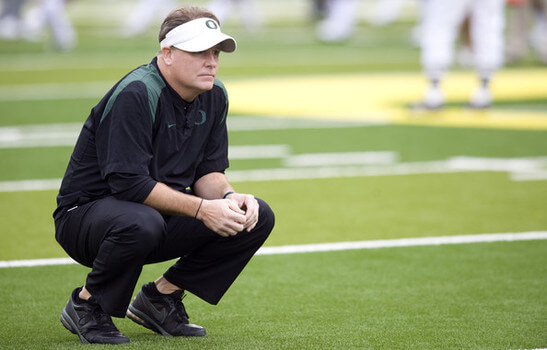 “Scott Stricklin, our AD, he’s well-connected around the country, and I believe we’ll have an excellent coach here in 3-4 weeks. The coach is with his team now. The coach we’re going to hire is probably I would almost 100 percent say is coaching his team today, this weekend and through the end of the season and maybe through the bowl game.”

That quote merely heightened the swirling of the rumors that Florida would indeed poach Frost from UCF into a full blown tornado, and somewhat quieted the combatting rumors that Stricklin was zeroing in on former Oregon coach Chip Kelly.

From a very reliable source. UF has reached out to representatives of Bob Stoops, Chip Kelly, and Charlie Strong to gauge interest in becoming the #Gators next head coach. These are believed to be UF's top choices.

But in a new development, that tweet from Ryan is suddenly accompanied by more smoke than you’ll see in a bad Western movie- at least in the case of one of those names.

Per a report from Pete Thamel of Yahoo Sports, the Gators have begun their background check on Chip Kelly. Sources have confirmed to me that this vetting process actually began on the final day of last month- three days after Florida suffered a 42-7 beatdown at the hands of Georgia and two after Stricklin and McElwain both agreed to pull the plug on McElwain’s tenure. The same sources also indicated that Kelly was the first person Stricklin decided to dig into.

Thamel goes on to write:

“The early read on how administrators at Florida and the SEC perceive the recruiting transgressions during Kelly’s tenure at Oregon is positive for the coach. A safe way to view Kelly’s NCAA issues is that not all show causes are created equally, and his issues at Oregon don’t appear to be a significant hindrance to his potential hiring at Florida. If there were a pattern of misbehavior, it would likely be a bigger issue.”

But sources are indicating to me that Florida may be a little farther along in their vetting process than that suggests.

As Thamel writes, and as Stricklin himself said in a press conference the night McElwain was fired, Florida would not be reaching out to coaches who were currently coaching. For the moment, let’s forget Spurrier’s indication that Florida would be getting a coach who is currently still coaching; we can come back to that later.

Since there are still two full weeks before the end of the regular season- and in the case of Frost, three weeks before the conference championship games are played- Stricklin is left with only one possible move. That move is to exhaust his efforts in the coaching search among the pool of potential coaches who are not currently coaching, namely Chip Kelly, Bob Stoops, Jon Gruden, etc. The thing is, Stricklin either has little or zero interest in the latter two, which means that Kelly all but monopolizes his attention among that pool of potential hires who aren’t currently coaching.

And conversely, the sum of all that means that Stricklin’s search so far has been spent almost exclusively probing Chip Kelly. Sources told me that time the search hasn’t been occupied with vetting Kelly has been spent on the same kinds of internet searches anybody could do on the other coaches- searches as basic as win/loss records, previous stops, recruiting reputations, and so on. These searches have primarily focused on Frost and Mississippi State’s Dan Mullen (who Stricklin obviously is quite familiar with already, having been his boss for nearly a decade in Starkville). No representatives of anybody currently coaching have been contacted, as Frost’s Golden Knights and Mullen’s Bulldogs are both amidst seasons that could see their teams finish in the Top 25.

So Florida’s had two weeks to really dig into Kelly, who left some Trojan horses behind in Eugene to spring up three months after he left for the Eagles and thus has more digging into to do than most. But Florida’s probe revealed the same thing that the NCAA’s findings did- that Kelly wasn’t guilty of anything particularly malicious.

When Mike Bellotti left after the 2007 season and Oregon promoted Kelly from offensive coordinator to head coach, the first thing Kelly did was have Oregon sign themselves up as subscribers of a recruiting service run by Texas-based scout, Willie Lyles. For the first two years of Kelly’s tenure, Oregon’s usage of the service was completely legal. But in 2010, Oregon paid $25,000 in exchange for direct “oral reports” from Lyles, and the NCAA considered that a no-no given their history together. Also considered a no-no was the fact that Lyles did a little underground recruiting for Oregon, perhaps because the school was paying him handsomely. Even though he wasn’t donating to the school, this connection technically made him a booster- and now you’ve got a direct violation of NCAA rules.

The problem was compounded when Lyles, either directly or through his uniquely named “Complete Scouting Services” company, gave then-Oregon commit and future Baylor running back Lache Seastrunk cash, food and hotel rooms. Talking to kids about Oregon and persuading them to go there is one thing, but add money and gifts to the equation and you’ve kicked a sleeping bear. Whatever your thoughts on college players getting compensated for their play, the fact of the matter is that it currently is and then was illegal- and that the NCAA is always going to make a big deal out of it.

But the logical conclusion from reading the facts is that Kelly wasn’t directly involved in any of this, and the NCAA’s mammoth of a memo about the topic goes a step farther and clearly states that. The one thing he really deserves any blame for is being the head coach of a program that engaged in illegal behavior, minor as it may have been.

Most of this information, up to and including that conclusion, can be found in the above NCAA memo. Sources told me that a big part of Florida’s vetting process was scouring through the documents as well as talking to some people who worked with Kelly at Oregon. All of this backs up Thamel’s wording of the result of this vetting process that “the early read on how administrators at Florida and the SEC perceive the recruiting transgressions during Kelly’s tenure at Oregon is positive for the coach.”

None of this is to suggest that Florida is going to hire Kelly when it’s all said and done. But during a multi-week period of time in which the Gators have no avenues to really explore in great detail other than Kelly, it would seem foolish to not hoe that road as well as they can. If Florida ultimately hires somebody other than Kelly, it will not be because they didn’t pursue him hard enough. It will either be because something popped up later in the vetting process or because Kelly flat out doesn’t want the job.

Thamel indicates that there are still plenty of questions regarding the congruence of Kelly and Florida, such as whether Gainesville has the east-coast vibe Kelly prefers, whether Kelly’s heart is set on a third shot in the NFL, or simply whether or not he’s interested in coaching the Florida Gators for any other reason. Sources indicate to me that Florida is nearing the point where these things are going to be discussed with Kelly and his representatives in detail. If there’s a mutual interest, and things move along well from both sides, Florida could theoretically be introducing Kelly as its head coach before the conference championship games are played on the first weekend of December.

But let’s not get ahead of ourselves here. We still don’t know that Kelly has any interest, as he’s notoriously introverted around even his most trusted friends and family. All we know is that Florida, i.e. Stricklin, is going to leave no stone unturned when it comes to his search for McElwain’s replacement. The communal feeling is that Jeremy Foley screwed up on his last two football hires in Will Muschamp and Jim McElwain, and that the University better not swing and miss for a third time in the same decade. So Stricklin doing his due diligence and sucking every well dry indicates that he’s going to do all he can to connect on this one.

Hopefully, the end result of this search- whether it’s Kelly, Frost or Mullen- will, too.

UPDATE: there’s even more smoke brewing now about the possibility of Chip Kelly coming to Florida.

Confirmed that UF is looking at Chip Kelly as next head coach. Decision could be as soon as this week. Also heard that Florida was becoming very frustrated with Jimmy Sexton, who represents many other potential candidates. Chip is represented by David Dunn.

8 thoughts on “Report, sources: Florida tested waters with Chip Kelly, and like what they found”