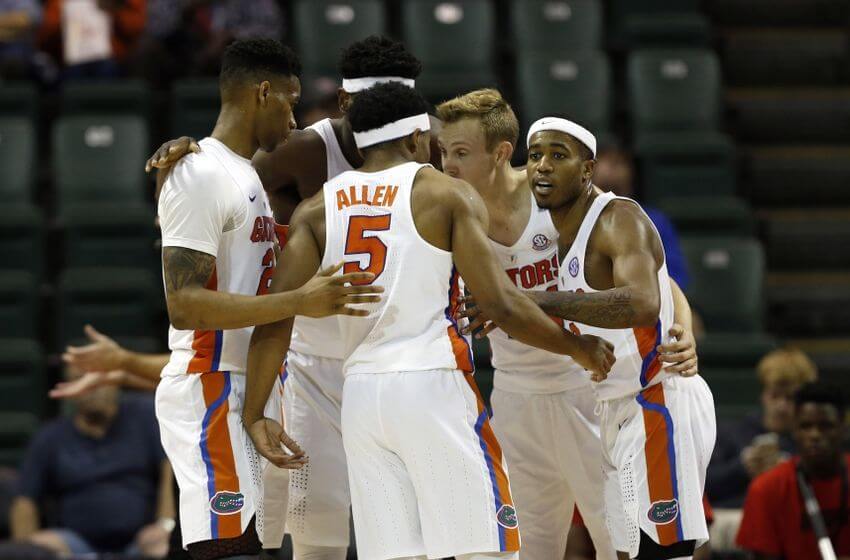 Instead, it’s South Carolina who will be embarking on a trip to the Final Four- the first in their school’s history- after a 77-70 victory over the Gators, while Florida is left to wonder what could have been. It’s the Gators’ fourth Elite Eight loss in the last seven years.

This one may have hurt the worst.

Florida led 40-33 at halftime, but the Gators proceeded to shoot 0-15 from three point land in the second half. Making matters worse, Sindarius Thornwell went off for 26 points, and the Gators turned it over 16 times to give the Gamecocks countless easy buckets in transition- which is Florida’s game. And as if all that wasn’t enough, the Gators sorely missed John Egbunu down low, as South Carolina outrebounded Florida 34-31 on the night- and seemingly got every one down the stretch.

The real story of the game, though, was the officiating.

I had to sit down and think about this in the aftermath of the game. I tried to give it a little time, to let the sting of the loss fade a little. Perhaps as the memories of the game began to fade, perspective would set in, and other memories like this one would begin to flood back in. I thought about the 2003 “Swindle in the Swamp” against FSU. I thought about the famous phantom slap from Dallas Baker against Tennessee in 2004. I thought about a multitude of games in different sports, with different stakes. And none matched this.

Simply put, this was the worst officiated game I have ever seen.

Time and again, the Gamecocks would slap and strike at the Gators as soon as the ball was put on the ground for the first dribble, and rarely were fouls called. On the other hand, Florida was whistled for some really ticky tack fouls that most people with functioning eyes and working knowledge of the game of basketball would know should not have been called. And when Devin Robinson was violently slammed to the deck on a jumper, the call of a common foul rather than a flagrant felt about as helpful as a grain of rice to an impoverished child.

Despite the lopsided odds, the Gators were only down 70-68 with less than a minute to go when Duane Notice broke free off an inbounds play and was streaking towards the hoop. He caught the football type pass under the basket, realized he was too close and tried to work his way back out. Unfortunately for South Carolina, he took six steps before dribbling. Unfortunately for Florida, he wasn’t called for traveling. And the refs’ failure to give the ball back to Florida down two with less than a minute to go was the final nail in the coffin.

Florida enjoyed a deeper run into the NCAA Tournament than most people could have predicted. Their season began without a national ranking, without very high aspirations. They got hot in the middle of the SEC schedule, winning nine straight, but then appeared to fall apart towards the end with three losses in their last four games before the NCAA Tournament. When the brackets were revealed on Selection Sunday, many thought the Gators were destined for a first round loss to East Tennessee State, and many more thought they would lose to Virginia in the Round of 32. Very few people thought this team would make it out of Orlando and advance to the Sweet 16. And Florida did.

So this loss doesn’t sting because of what could have been, namely joining a Final Four field that includes a Gonzaga team the Gators led for about 35 minutes and should have beaten and an extremely up and down Oregon squad. It stings because of the way this game was taken from them by the either grossly incompetent (probably) or biased (probably not, but it was so bad that it’s at least fair to wonder) referees. And even though Florida didn’t help themselves out with their second half shooting, playing a big time basketball game where almost every single call that could have possibly been given to South Carolina without the Gator fans storming the floor and lynching the referees was given to South Carolina is bound to get to you eventually.

I’ve followed sports since I was five. I’ve witnessed my various teams win a lot, and I’ve witnessed them lose a lot. I also played competitive tennis, from high school to USTA to the NCAA level. Likewise, I’ve won a lot of matches, and I’ve lost a lot of matches. The way sports works is that someone has to win, and someone has to lose. It’s inevitable that your team will lose sometimes, and it’s just as inevitable that your team will lose in crushing manners if you follow them long enough. I can accept when a team is better than mine, and beats my team fairly. I have no problem shaking hands with a fan of an opposing team and telling him “good game,” or that his team was better than mine, regardless of how crushing the loss is for my team or how much a win would have meant. In truth, every fan should be willing, able and ready to offer heartfelt congratulations to rival fans and/or players when their opponent outplays them. To the victor go the spoils. South Carolina has had a superb season of their own, too, and deserve all the credit in the world for getting to this point. Plus, given how Florida got to this stage- with a ridiculous buzzer beater by Chris Chiozza in the preceding round- they were playing with house money anyways, and it’s hard to complain about any subsequent failure to what I’ve always believed are the Gods of Fairness.

But I cannot, do not and will not recognize this defeat as a fairly contested one. No team should have to play a basketball game where one team can consistently and repeatedly get away with actions that border on assault but the other team has to keep all body parts two feet away from their opponents at all times, or where the basic rules of the game only apply to one team. I understand that Florida did not shoot the ball well in the second half, and that they turned it over sixteen times. I also understand that the referees are human beings capable of making mistakes. The Gators still would have won this game if the same actions were called against both sides, however strict or lenient the refs wanted to be, and they would have won this game if even some of the calls went their way- or simply went against South Carolina- and if five petty fouls weren’t called on Florida in the span of twenty one seconds early in the second half.

There’s a notable difference between calling the game tight both ways and setting different guidelines for what constitutes a foul for the two teams- then sticking to and subsequently calling the game based on those uneven guidelines. And there’s an even bigger difference between an official making a single error in judgment and the group of officials doing everything in their power to help one team out with the aforementioned consistently uneven set of guidelines.

But no amount of screaming and yelling is going to undo the result. Florida lost, and we have to live with it, pick up the pieces and move on. My heart hurts for the seniors- Kasey Hill, Schuyler Rimmer, Justin Leon and Canyon Barry- because of how it ended. Mike White will certainly put out better teams than this, deeper teams with more inside options and less streaky shooters; he managed to mold the pieces of Billy Donovan’s worst team at Florida into an Elite Eight squad with just two years of working with them. He deserves credit to the stars for all that he’s done in his short time in Gainesville, and it’s as sure as the sun will set tonight that he will have the Gators remain in national championship contention for several years to come.

And as sure as the sun will set tonight, the sun will rise on a new day tomorrow. On no day, however, will the phrase In All Kinds Of Weather mean more than it does today.

Leave a Reply to Donald from Wisconsin Cancel reply