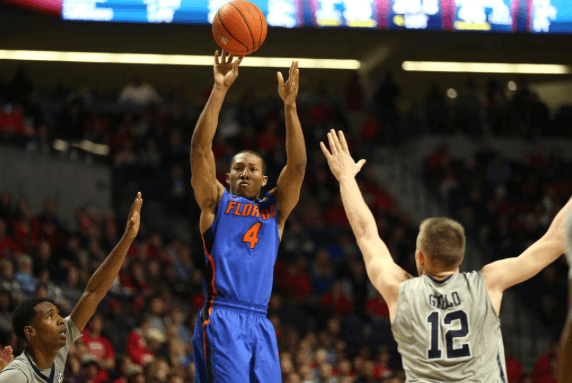 The Gators’ second game against Ole Miss turned out to be much more nerve wracking than the first one.

No matter, though. The result was still the same.

The Gators, still licking their wounds from an 80-61 pasting at the hands of Kentucky, bounced back with a 77-72 win over Mississippi last night thanks in part to 16 points from Dorian Finney-Smith and 15 more from Kevaughn Allen. The win puts Florida at 16-8 on the year, including 7-4 in the SEC, and gives them their first multi-game season sweep of the Rebels since 2007.

More important than any of that, though, Florida didn’t play well against a team that needed this win just as badly as they did, and still found a way to win. The Gators turned the ball over 16 times, way above their season average, and shot 65% from the free throw line. And though their defense was generally good, they never did figure out how to stop the Rebels’ star, Stefan Moody. Luckily, Moody sat for most of the first half after picking up three quick fouls, and eventually fouled out… but despite playing barely half the game, he still finished the night as the leading scorer with 19, including one three ball that appeared to be shot from Ocala.

But it wasn’t Moody who came through in the end.

Down eight late in the game, the Rebels slowly whittled the deficit down to 67-66 with 1:20 to go. Kasey Hill then made a ridiculous one handed jumper as he was going down after being fouled, but missed the free throw. Moody then turned it over, the Gators got the ball to KeVaughn Allen, and then this happened:

The game then deteriorated into a free throw shooting contest, and, well, Florida made enough of them (two of their last four) to hold on. Devin Robinson throwing down a thunderous jam off a fast break with seven seconds to go probably didn’t hurt, either. And so now that the anxiety of nearly blowing a late lead, as the Gators made a habit of doing not so long ago, is gone, we can all breathe, relax, and file this one away in the win column.

It’s a good thing Florida won, too, because things are about to get a lot tougher. After a home game against Alabama on Saturday night, the Gators’ next five games are: at Georgia, at South Carolina, Vanderbilt, at LSU and then Kentucky. None of those teams are exactly at the level of Kansas or Oklahoma, but those are five solid basketball squads, the worst of which are on the NCAA Tournament bubble. And playing three of those games on the road won’t help matters. Point is: the Gators’ record could easily take a beating throughout the remainder of the season, so it’s become imperative to do all the work they can to build their NCAA Tournament resume before that five game gauntlet arrives.

And so on a night in which the Gators’ play suggested there’s still a lot of work to do, the bottom line was this: a down but not out Ole Miss team had a chance to deliver a damaging blow to the Gators’ NCAA Tournament chances with that brutal stretch on the horizon, and Florida fought them off.

One thought on “Rebels down: Allen’s late three propels Gators to season sweep of Ole Miss”