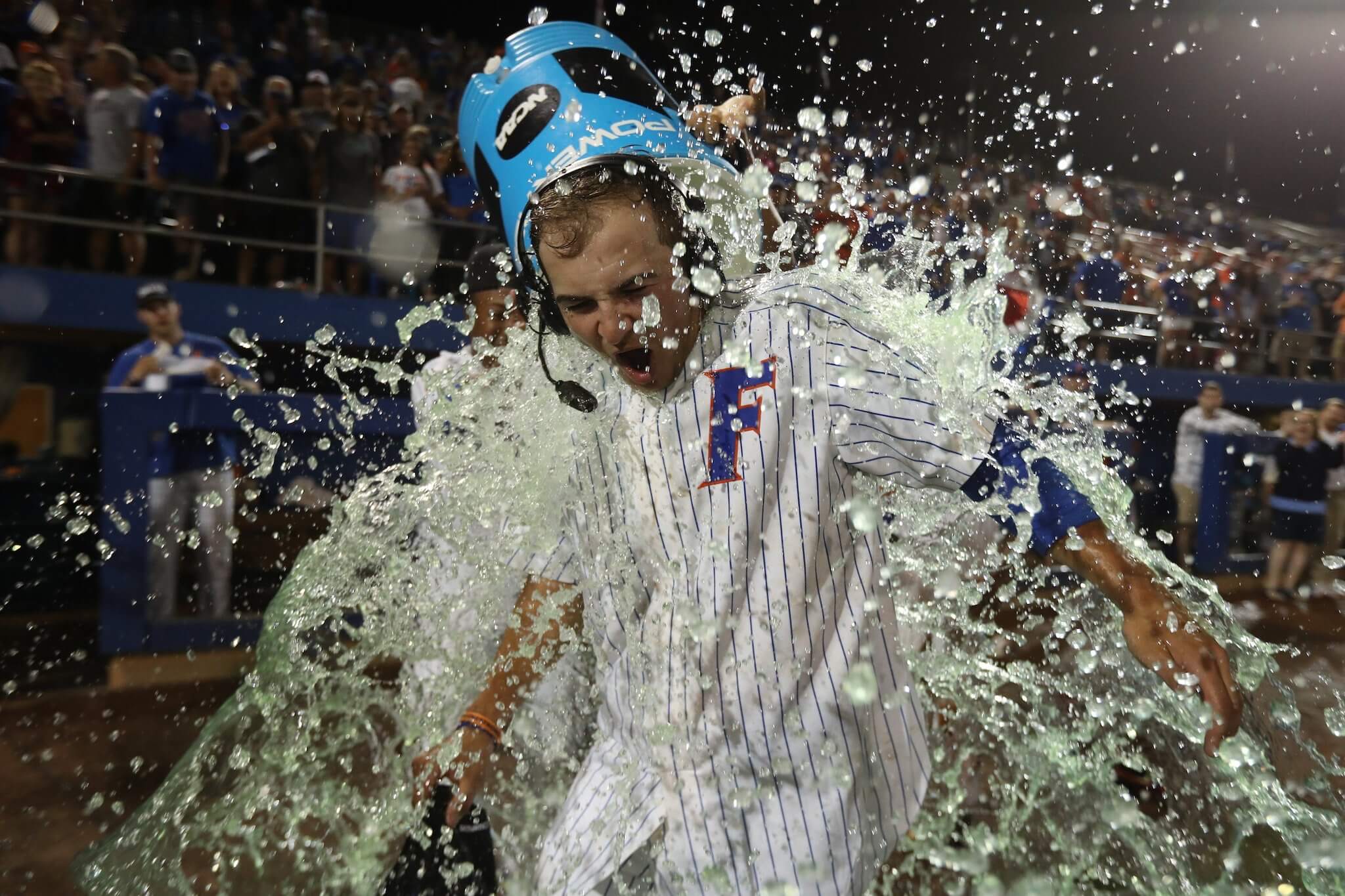 With 2018 all wrapped up, it’s time to put a nice bow on an overall great season for the Gators’ athletic program with a rundown of the top 10 plays of the 2018 calendar year.

I know, “top” or “best” are very subjective, so in the name of transparency, here’s how I determined this order. First things first, Florida has to have won the game that the play took place in for that play to be considered. Beyond that, factors for consideration included degree of physical difficulty involved in completing the play, the amount of shock that the play inspired, the level of elation the play elicited, the stakes of the game, and the level of importance the play had in the Gators winning that game.

So here we go:

On a fourth and one, Vols quarterback Jarrett Guarantano suckered the entire Gator defense with a play fake and found tight end Austin Pope wide open down the left sideline. Nobody seemed to have a chance to stop him. But out of nowhere flew CJ Henderson, taking the perfect angle and meeting him at the five yard line, where he interrupted Pope’s path to the pylon and dislodged the ball, which bounded through the end zone for a touchdown. That squelched any realistic chance Tennessee had in a game the Gators would win, 47-21.

With :2.5 showing on the clock in the annual showdown between the Gators and Wildcats at Rupp Arena, Florida had defied the odds to hold a 66-64 lead. All they had to do was stop Kentucky on an inbounds play underneath the basket. Kevarrius Hayes took care of that, stepping in front of the inbounds pass and batting it down. Chris Chiozza then picked it up and rainbowed it down the court to let the remaining second run out and secure the upset.

Florida had secured the victory in the Peach Bowl long before this moment, which came with the score reading 34-15 with under five minutes left. All the Gators needed was a virulently shareable moment to properly finish the deal. And Chauncey Gardner-Johnson was happy to oblige, grabbing a deflected pass off his shoetops and taking it straight down the jetway for a 30 yard pick six to provide an unforgettable moment to epitomize the football program’s return to relevance.

Up 6-3 against the Red Raiders in the top of the eighth in an elimination game at the College World Series, Florida desperately needed more insurance. With two outs, and Blake Reese on second, Brady Smith gave it to them by taking a 2-1 pitch for a ride to the farthest depths of TD AmeriTrade Park. The ball struck the yellow line at the top of the ball and bounced back in play, allowing Reese to score to make the score 7-3. Meanwhile, Smith motored all the way to third for an RBI triple before scoring on the ensuing Nick Horvath triple. That triple turned out to be the difference in a wild game that Florida would win 9-6 to advance to the CWS Semifinals for the third time in the last four years.

It felt a little bit like Florida was awaiting execution late in a tie game in Columbia, Missouri. The Tigers inbounded the ball and dribbled out most of the clock before beginning to run their designed, potential game winning play. But that play didn’t account for Chris Chiozza, who jumped the passing lane and took the ball all the way down to the other end for an easy game winning layup with less than a second left on the clock. In a situation that seemed to have only two possible outcomes- Missouri wins or overtime- Chiozza stole yet another win for the Gators.

Already up 34-14 with four minutes to go and driving again, the fact that Florida was going to score another touchdown was inevitable. But there was nobody more fitting to earn that right than Scarlett, who missed all of 2017 due to the credit card fiasco. All Scarlett wanted was a second chance, and he put himself through hell this offseason to get himself back into good standing with the new staff to get it. For him to be the guy to cap the statement win over FSU, to score that last touchdown to remove the last morsel of doubt that FSU’s five game winning streak, its bowl streak and its winning seasons streak were going to continue was simply an inexplicably special moment.

4: Langworthy hits it to Omaha (vs. Auburn, baseball)

It was the scenario little kids dream about. 2-2. Bottom of the eleventh. Game Three of an NCAA Super Regional, winner goes to the College World Series. And that dream was even more far fetched for Austin Langworthy, who hadn’t homered in Alfred McKethan Stadium all year until just the day before. Leave it to Langworthy to turn that dream into a reality, albeit not without help. He roped a hard line drive to the warning track in right field. A well struck ball, for sure, but not well enough to end the game. Or so it seemed. Right fielder Steven Williams got a glove on the ball, but not in the way he wanted to, redirecting the ball up and over the wall for one of the most stunning plays in Gator baseball history.

Perhaps no one game was as widely circled on the calendar for an opponent as this one was. Mississippi State’s Davis-Wade Stadium has typically been a house of horrors for Florida (even Steve Spurrier went 0-2 there) and a sea of maroon clad Bulldog fans intended to continue that pattern with their former hero Dan Mullen returning with his new team. But Donovan Stiner put an end to that idea, coming in on a safety blitz on 4th and ten with a minute to go and leveling Fitzgerald to turn the ball back over to Florida. And thus, Mullen added one more victory in Starkvegas in a coaching career filled with them.

Langworthy was actually the second Gator to deliver a walk off homer to send Florida to the World Series. As unforgettable as his was, though, it couldn’t hold a candle to what his female counterpart Jordan Matthews did. Florida softball was in an even more precarious position, down 5-3 in the bottom of the seventh and final inning in Game Three of the Super Regionals. With two Gators on base but one strike away from clinching the upset, Trinity Harrington left one up in the zone and the freshman Matthews pounced, taking it the other way and out of the park for a walk off three run homer to send the heavily favored Gators to its ninth WCWS in the last eleven years.

-Baseball: JJ Schwarz’ last homer as a Gator vs. Texas

1: Stewart lights up Swamp with pick six (football, vs. LSU)

Perhaps no play from 2018 will be remembered longer than the one that put the most popular sport at Florida back on the map. A rowdy crowd of 90,283 got to witness a thrilling, back and forth game between 22nd ranked Florida and 5th ranked LSU. With just under two minutes to go and Florida clinging to a 20-19 lead, safety Brad Stewart stepped in front of a Joe Burrow pass and returned it all the way down the right sideline, finishing his runback with a somersault just inside the pylon for a pick six that, according to Mick Hubert, turned the Swamp into an insane asylum. Florida would go onto win 27-19, helping propel the Gators to the New Year’s Six- and thanks to the game they won on that stage, to what will likely be its highest final ranking since Tim Tebow’s senior year.

One thought on “Ranking the top ten Gator plays of 2018”