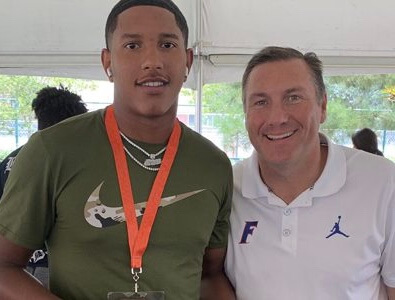 As it usually does, Florida’s Friday Night Lights camp has resulted in an addition to the Gators’ list of committed players.

This time, the (first) pledge came from pro-style quarterback Carlos Del Rio, from Powder Springs, GA. Perhaps because he’s a member of the recruiting class of 2021 and has not had sufficient opportunities to be scouted by the so-called “experts,” Del Rio is a consensus three star prospect. But even at this early stage in his recruitment process, Del Rio already has offers from Auburn, Michigan, Mississippi, FSU, Tennessee, Miami, Virginia Tech and NC State.

Maybe his performance at Friday Night Lights was is an indication of why.

He’s not the runner that Anthony Richardson or Emory Jones is, but he’s good enough with his legs for Mullen to keep the defense honest with him in the game. More importantly, as just a rising junior, Del Rio is very fundamentally sound as a passer. And now we know he can demonstrate these sound fundamentals in high pressure situations, too.

The feeling heading into last night’s camp was that Florida coaches liked Del Rio, but were overall unsure about how whether he could play at a high level at the next level. Del Rio, for his part, came into the evening wanting to be a Gator and erased those coaches’ uncertainty by drawing heaps of praise with an excellent performance against some of the southeast’s top athletes. Gator coaches were sold after watching him; this was their guy. And immediately after telling him as much, Del Rio pulled the trigger.

Not to much more to say !!! pic.twitter.com/Iaa6hyzaX4

Del Rio spoke to reporters afterwards and sounded more confident about his decision with every passing moment.

“This offense is my style,” he said. “I’m a passing quarterback, but if I need to use my legs I most definitely can. That’s their type of offense. Coach Mullen being a quarterback coach, he’s going to process you as being a pocket passer but if you need to be a dual-threat then you can.”

Florida now has three commitments for the Class of 2021, along with offensive lineman George Jackson and defensive end Tyreak Sapp.