Midway through the second quarter of the Gators’ home opener against UT-Martin, the Swamp was getting restless.

Florida’s offense had generated a grand total of three points. The unit stalled in the red zone and kicked a field goal on its first drive, and quarterback Feleipe Franks got stuffed on a fourth and two draw to turn the ball over on downs near midfield. And thus, for the first 20 minutes or so of game action, Dan Mullen’s offense didn’t look a whole lot better than it did against Miami in Week Zero.

Then Franks found Van Jefferson wide open on a deep corner route down the right sideline, who casually trotted into the end zone. And just like that, the floodgates opened up.

Franks completed 25 of his 27 passes for 270 yards and a pair of scores, three different Gators each scored on the ground, Jacob Copeland notched his first touchdown catch as a Gator, and Florida totaled 543 yards of total offense in a 45-0 blowout of the FCS Skyhawks. In doing so, the Gators covered the obscene 44.5 point game spread- which means they officially got their money’s worth in paying UT-Martin exactly half a million dollars to come to the Swamp for this game.

But Florida also paid dearly for this game in other fashions.

Explosive wide receiver Kadarius Toney appeared to injure his left forearm late in the first quarter, and had to be taken to the locker room, where he remained for the duration of the game. The initial play did not look good, and Mullen said that the arm would require further tests. On Monday, Mullen corrected earlier reports that said Toney would be out 6-8 weeks, saying he would only be out a couple of weeks. “We’ll see how he heals,” Mullen added.

That initial report was behind a paywall, so there’s no sense linking it, but here’s a screenshot from one reader with access to it: 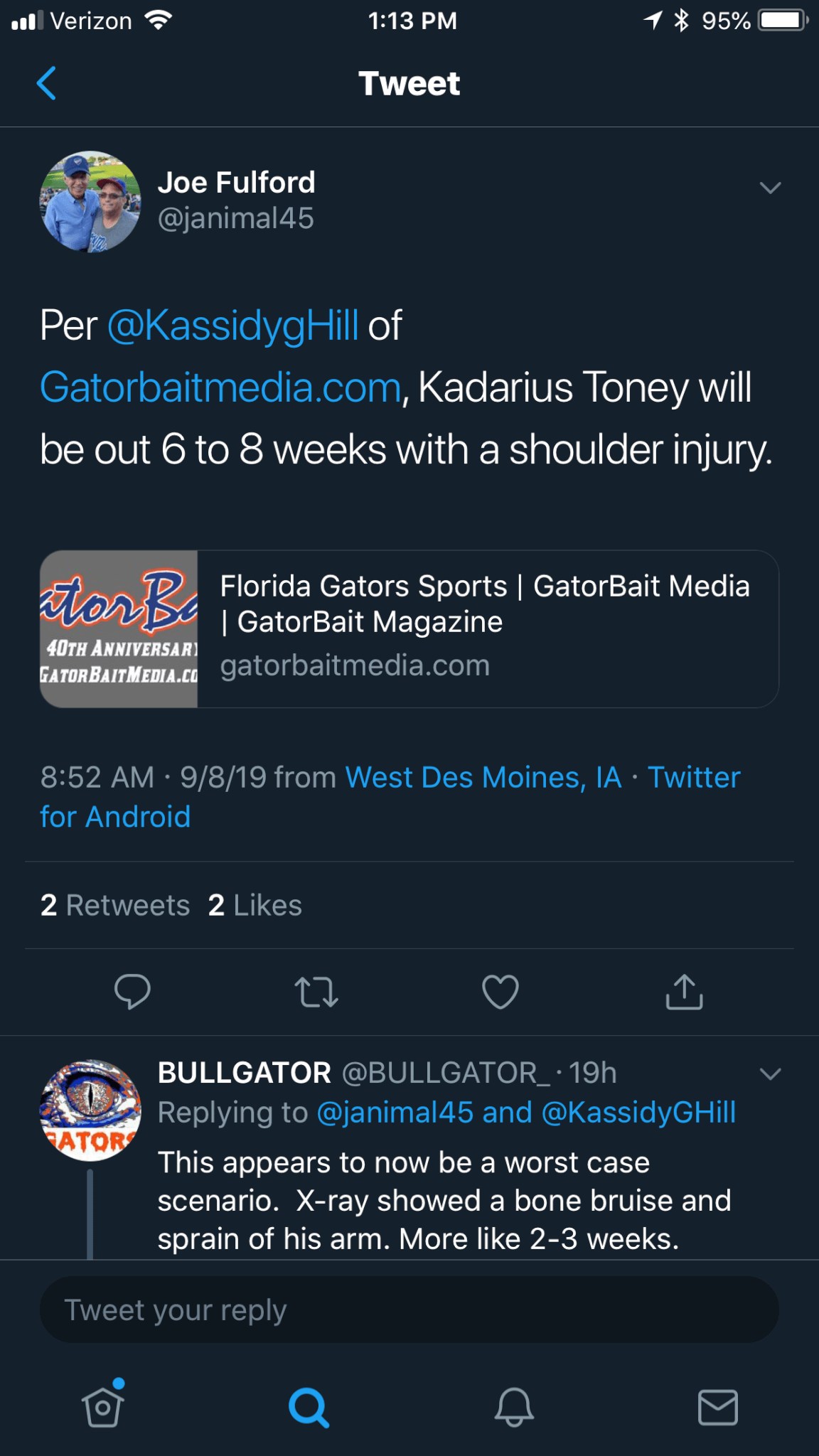 And mere moments later, star cornerback CJ Henderson sprained his left ankle covering a receiver and had to be helped off the field. He later returned to the sideline in a walking boot and crutches. Mullen updated his status as well on Monday, saying that he was doubtful for Florida’s road trip to Kentucky this week but didn’t explicitly state how long he’s expected to be out. If anything, though, the fact that he’s “doubtful” in one week opens the door for him to return in less than a month, as initial reports claimed.

After both newly minted #1 jersey holders went down in a matter of minutes, the game turned into an afterthought. Soon after finding Jefferson on the corner route, Franks lobbed an even easier touchdown pass to Tyrie Cleveland to make it 17-0 at halftime and essentially put the game away. And when Malik Davis punched it in to make it 24-0 three minutes into the third quarter, it became clear that UT-Martin had no answers.

From there, the Gators’ focus shifted to finding the team’s next generation of stars- specifically at the positions where they had lost their current stars. And though, yes, it was against an FCS school, they got some impressive preliminary results. Promising redshirt freshman wide receiver Jacob Copeland stepped in and grabbed three passes, including one for a touchdown from Kyle Trask, and true freshman cornerback Kaiir Elam played a fade route perfectly and came down with a shutout-saving interception in the corner of the end zone.

Good thing, because Florida’s likely going to need those guys, and more, to step up immediately with the absence of their stars. Up next: a rematch with Kentucky, this time on the road, one year and six days after the Cats stunned the Gators in the Swamp and ended their 31 game winning streak. That was the fourth longest win streak by one team over another opponent in college football history.

The team will have some rope to grow and learn after that. Two weeks from now, perhaps the worst Tennessee team of all time comes to Gainesville. And that’s not an exaggeration in the slightest bit, because the Vols have never lost more than eight games in a single season and are already 0-2 with upset losses to Georgia State and Brigham Young before SEC play even starts. The week after that, Florida gets another FCS payday opponent in Towson. But then it’s game on, as the Gators draw top ten teams Auburn and LSU in back to back weeks.

Then again, Dan Mullen has made a habit of adjusting and adapting when things don’t go well. And if that history, as well as the relief performances by Florida’s young but promising understudies at both wide receiver and cornerback tonight were any indication, the Gators will manage in the meantime just fine.