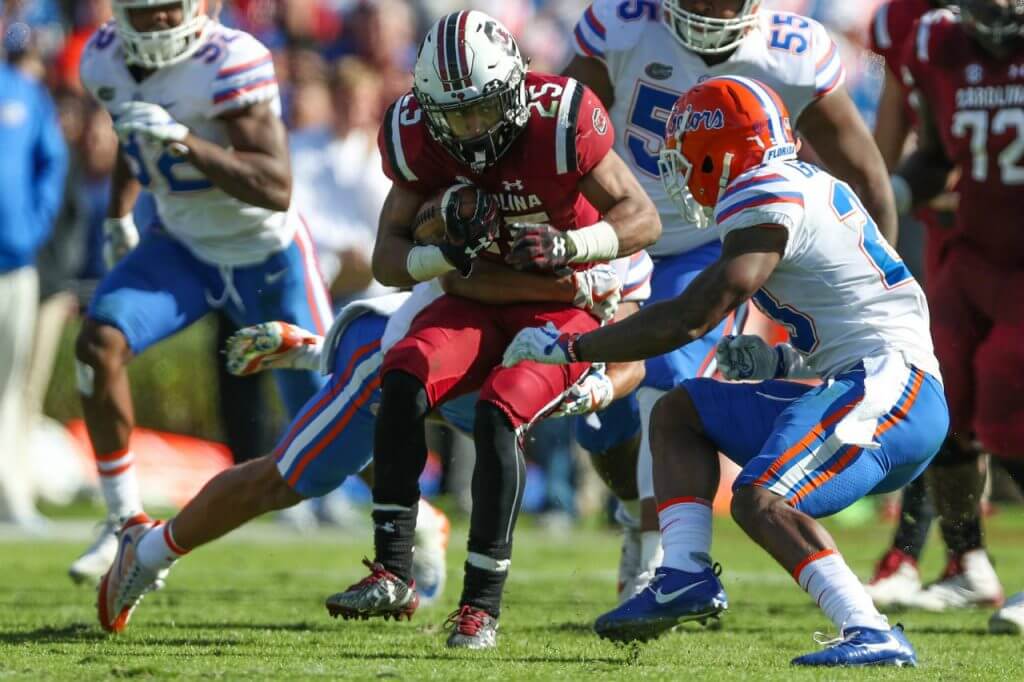 Synopsis: How can a team boast the most reliable quarterback in the SEC, put up 469 yards of total offense, limit its opponent to 300 on the nose, strip a defensive back and rob him of a pick six 36 inches away from the goal line, watch two opposing teammates fight each other over a pass and tackle each other to prevent a touchdown, and still nearly lose to a team that finishes 4-7? Ask Will Muschamp, who while yes, is on the sideline and not actually playing, has a history of managing teams that find the most head scratching ways to lose football games. Yes, there was a stray 11-2 season in 2012 at Florida that ended so badly it overwrote a lot of the good things that happened that year, and there was last year’s 9-4 record in a seriously depleted SEC East. But in his third year in Columbia, with Florida and Tennessee starting over and Georgia going nowhere, it’s put up or shut up time for Muschamp. Hype is high in the Palmetto State, and though South Carolina will be satisfied with consistent 7-6 seasons, with what might be the best offense he’s ever had to work with and a new offensive coordinator, this may be his last chance to win over his critics and prove he’s more than a seven win coach.

Offensive breakdown: Muschamp finally fired Kurt Roper after three unsuccessful seasons as his offensive coordinator (one at Florida, two at South Carolina) and promoted Bryan McClendon to the role. As we all remember from his days at Florida, Muschamp is a defense first, defense last coach. Which is fine, in a vacuum, but unlike the two guys who squared off for last year’s national championship, he doesn’t have a history of micromanaging his offense. Ceasing to do so will be the key for him this year.

Any preview about the Gamecocks’ offense has to start with Jake Bentley. His stats won’t blow you away, but he does have a 13-7 record as a starting quarterback and he did throw for 2,794 yards a year ago. Yes, he did throw 12 interceptions, but seven of them came against stout Florida, Georgia and Clemson defensive backfields. So there’s a correlation between the strength of the defense he faces and his turnovers. He must cut down on that if South Carolina is to have a prayer of contending for the East this year.

But this year, Bentley is going to have a more up-tempo offensive attack, and with a pair of explosive teammates accompanying him in the backfield, he should be in good shape. There’s Rico Dowdle (379 all purpose yards in eight games last year, 819 in a full 2016 season) and there’s AJ Turner (1,288 all purpose yards in the last two seasons). The tandem give Muschamp and McClendon the ability to run the ball as much as they please. But the offensive line may or may not; Carolina returns four starters up front, but that was from a sieve of a unit a year ago. Credit where due, though: Muschamp recognizes the mess up there and has signed ten offensive linemen in the last two recruiting cycles, four of which were four star recruits.

Bentley will again have plenty of targets to throw to. Deebo Samuel is back and fully healthy, and that’s a big deal- that’s 250 yards worth of receptions in just three games last year, and 783 in a full 2016 season that he’ll have at his disposal. And Bryan Edwards returns to his WR2 spot with Samuel back, which is just as big given that he would be the WR1 on two thirds of the teams in the nation. Behind those two, it’s a little murky, but there’s promise. Sophomores Shi Smith and OrTre Smith will have to step up, as well as freshmen Josh Vann.

Offensive Grade: C+. Talent wise, this is a solid A unit. But- and don’t hate me for continuing to hammer away at this, because this is a proven fact- nobody has ever done less with more offensive talent than Muschamp. And there are six years of sub top 80 offensive finishes in the 130 team FBS despite his admitted recruiting prowess to back that up. Maybe this is the year he finally learns to stay out of the damn way and lets his offensive coordinator do his job, but until I actually see it, I’m not buying it.

Defensive breakdown: Here’s why I’m not buying stock in South Carolina this year. Love the man or hate him, it’s essentially common knowledge that Will Muschamp can coach defense. But there’s a truckload of talent that has to be replaced on this side of the ball. Four guys who wreaked havoc at their respective positions- Skai Moore, Chris Lammons, Dante Sawyer and JaMarcus King- are all gone.

There is talent up front to replace them. Defensive end Aaron Sterling, interior tackles Javon Kinlaw and Kobe Smith each saw live game action last year, and there are backup options to hope for as well. JUCO transfer Jabari Ellis, four-star redshirt freshman M.J. Webb, true freshmen Rick Sandidge and Kingsley Enagbare have all drawn praise from coaches this offseason.

The same risk-reward scenario exists in the middle level. TJ Brunson and Bryson Allen-Williams will be counted on to fill the big shoes Moore left, and Sherrod Greene is set to move into a full time starting role. However, there isn’t nearly the depth at linebacker that there is on the line, and so the Gamecocks cannot afford so much as a single injury here.

The secondary could be good, but it’s the biggest unknown of all. Corner Rashad Fenton is the only returning starter back there, although the Gamecocks did import Nick Harvey from Texas A&M and Jaylan Foster from Gardner-Webb. Still: the defensive backfield is largely unknown, and Muschamp and Travaris Robinson have their work cut out to find a rotation that works.

Defensive grade: C+. There’s definitely potential on the Gamecocks’ defense, and Muschamp and T-Rob could certainly mold this unit into something respectable. But it’s never easy to replace so many valuable pieces at once, and so while the future is bright here, growing pains are almost a certainty.

Key matchup: Jake Bentley vs. Florida DB’s. The Gators’ secondary definitely won this battle a year ago, picking off three passes, but lost the game anyway because the rest of the team was inept. If the unit affectionately known as DBU can keep the Gamecocks’ passing game at bay again, the rest of the team should be able to do the rest.

Florida key to victory: Establish Jordan Scarlett and the running game early, then pound the ball down the Gamecocks’ throats. South Carolina stands no chance- repeat, no chance- if they can’t stop the run. However, while South Carolina is fairly inexperienced on defense, this is the tenth game of the season for them, and that means they may be starting to figure things out at this point.

South Carolina key to victory: Bentley has to spread the ball around. His play is going to go a long way toward determining this game’s outcome either way, but if he has a big day as opposed to just managing the game, as the phrase goes, South Carolina could stretch the field vertically and make some plays. And as good as CJ Henderson and Marco Wilson are, stopping Dowdle, Edwards and Samuel is going to be a chore for even the strongest of secondaries.

Summary: This is weird. Yes, Florida has its share of question marks, but I would honestly feel a lot better about Florida’s chances if this game was early in the year, as the Gamecocks are much more likely to desperately scramble around to find a defensive rotation that works early in the year than late. There’s a ton of production to replace on that side of the ball, but the amount that opponents can take advantage of that slopes downward as the season progresses and the newbies gain experience.

Still: this game is in Ben Hill Griffin Stadium, a place that even the inept Jim McElwain went 13-2 in. Bentley’s first venture into the Swamp didn’t go very well, and even though he’s certainly gotten better from that point in time, he still has a tendency to make mistakes in big games (I’ll again point to seven picks against Florida, Georgia and Clemson last year). And you have to think that this is the game that Florida’s talented yet inconsistent offensive line is most likely to push its opponent around.

So: though this game is going to produce a lot of tense moments, if not a downright terrifying late game situation, I have to imagine that Florida pulls this one out. Muschamp simply has too long of a list of winnable games that his team lost, particularly when his team is the underdog- and while South Carolina is more highly regarded than Florida in the preseason, something tells me they won’t be by November. Gators win on a field goal from Evan McPherson in the waning moments.