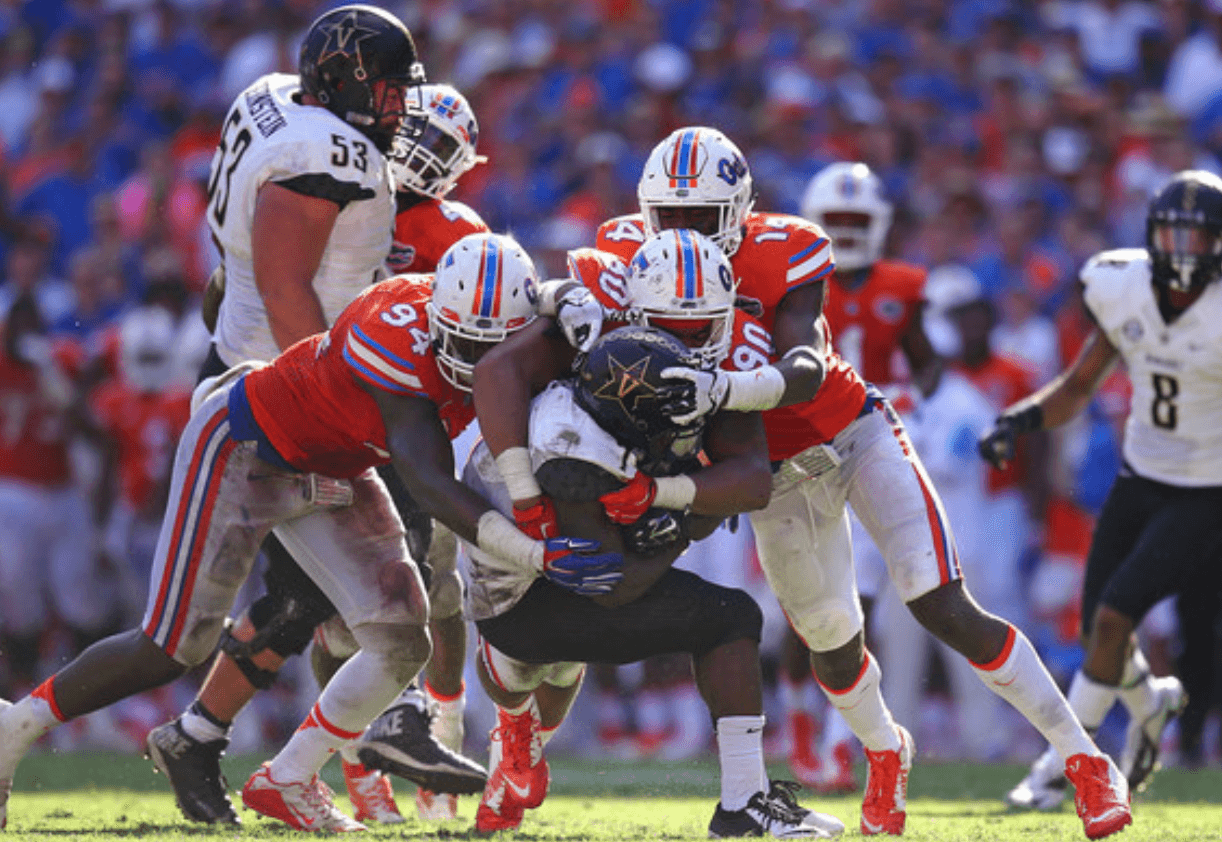 Vanderbilt senior Ralph Webb figures to be ready for his second and final trip to his hometown as a Commodore running back.

Synopsis: Vanderbilt has terrified the Gators in each of the last two seasons despite being horrid offensively and good, but not great defensively. Florida might finally have the offense needed to make the Commodores the whipping boy they used to be in the days of Danny Wuerffel and Tim Tebow, though, and while Vandy is better than it has been in decades save for the James Franklin years, this program still doesn’t have the talent to compete with the Gators on paper. Whether or not they do on the field is a different story.

Offensive breakdown: Vanderbilt returns eight starters… from the sixth worst offensive unit among Power Five conference teams. So that might be a red herring. Kyle Shurmur is back at quarterback, though, and he looked really good towards the end of the season in wins over fading Mississippi and Tennessee teams. If he can duplicate that kind of production and make good decisions going forward, the Commodores might be alright here. He isn’t going to light you up- he only threw for over 280 yards once last year- but he’s the kind of game manager that can succeed with a good running game.

And Vanderbilt has that good running game. Ralph Webb is the lone proven threat for the Commodores, but the Gators won’t forget him after he raced right through their defense for a long touchdown run in 2015. Webb has tallied over 900 yards in each of his three seasons in Nashville, including over 1,100 each of the last two years, and he set the school record with 1,283 yards a year ago. But the issue is depth. Vanderbilt will need Jamauri Wakefield and Khari Blasingame to step up and take some of the burden off of him. The Commodores will also have to replace their two best linemen from a year ago.

The big question is whether or not Shurmur can get production from his wide receivers. Seniors Caleb Scott, CJ Duncan and Trent Sherfield provide experience, and all three improved as 2016 went along. But they’ll need to become more than just last resorts in this offense if it’s to succeed. Coaches also like Kalija Lipscomb.

Offensive Grade: C. You can’t completely write them off because of Webb, but this simply isn’t the level of talent that’s needed to be a serious player in the SEC East race.

Defensive breakdown: Zach Cunningham, Torren McGaster and Adam Butler are all gone, leaving the Commodores to rebuild on defense. Defensive lineman Nifae Lealao gives them one SEC caliber starter on defense, but they’re going to need to find more. Perhaps defensive end Jonathan Wynn gives them another, but beyond him, Derek Mason is hoping for the best from some of his young guys.

Oren Burks will move from Star to the inside linebacker spot once occupied by Cunningham, and he gives the defense a quality leader. But same story here: Mason is going to need some of his young guys to step up and shine once they’re thrust into action. And even with Cunningham a year ago, the Commodores’ pass rush last year was… well, who are we kidding, they didn’t have one. No defense, regardless of how stout, will succeed if they can’t force negative plays from time to time, and they’ll need to figure out a way to do this year to avoid taking a major step backwards.

The defensive backfield may be the defense’s- if not the entire team’s- saving grace. Other than McGaster, everybody who has ever played a meaningful snap is back. LaDarius Wiley, Ryan White, Taurean Ferguson and Arnold Tarpley are back to form an impressive four man safety rotation, while Tre Herndon and JoeJuan Williams return at corner. This secondary is traditionally a problem for anybody to deal with, and should be again this year.

Defensive grade: C+. For most teams, defense wins championships. For Vanderbilt, defense will win them a trip to a bowl game. But proceed with caution against them: testing their secondary too many times might backfire.

Key matchup: Kyle Shurmur vs. Florida defense. Regardless of how good a running back Ralph Webb is, Shurmur is going to need to make plays with his arm if Vanderbilt wants to do more than just hang around. Otherwise, Florida will sell out and stuff the box. And good luck running against a nine man front.

Florida wins if… they can establish the running game. I know, it’s the third straight game I’ve listed this as the Gators’ key to victory. But unless either Feleipe Franks or Malik Zaire has launched himself into the Heisman discussion by the end of September, Florida’s sole path to victory should be the ground game. Sure, Florida’s going to need a big play from its quarterback at some point, but if they can’t get Jordan Scarlett and LaMical Perine going, things could get extremely interesting. And not in a way that most Florida fans will enjoy.

Vanderbilt wins if… The Commodores can create turnovers and set up good field position for their offense. Nobody is mistaking Ralph Webb for Leonard Fournette or Christian McCaffrey, but he’s more than capable of slashing his way through a short field for a score. And in a game that figures to be extremely low scoring, one mistake here or there could make all the difference.

Overview: The story with Vanderbilt is essentially the same as Kentucky: they’re a gritty bunch, and they’ll fight, but Florida is simply more talented everywhere you look on both sides of the ball. Particularly if the Gators have found a dependable quarterback by this point in the season, Vandy isn’t really likely to damage the aura of near invincibility that Jim McElwain has seemingly restored to the Swamp.

Nobody thought they were likely to beat the Gators two years ago, either, though, and if not for the shaky Austin Hardin picking the perfect moment to drill a game winning field goal, they would have. So it’s worth going through all the standard warnings against self destructing and not taking the Commodores seriously. And with the Gators facing the hardest part of their schedule following this game, it would be easy to look ahead and downplay the significance of it.

So it should be noted that as long as Florida shows up, plays fundamentally sound football, doesn’t turn the ball over and plays up to its potential instead of down to its opponent, they’re in no real danger. Barring nap time in the Swamp, the Gators will take care of Vanderbilt and improve to 5-0 on the year.