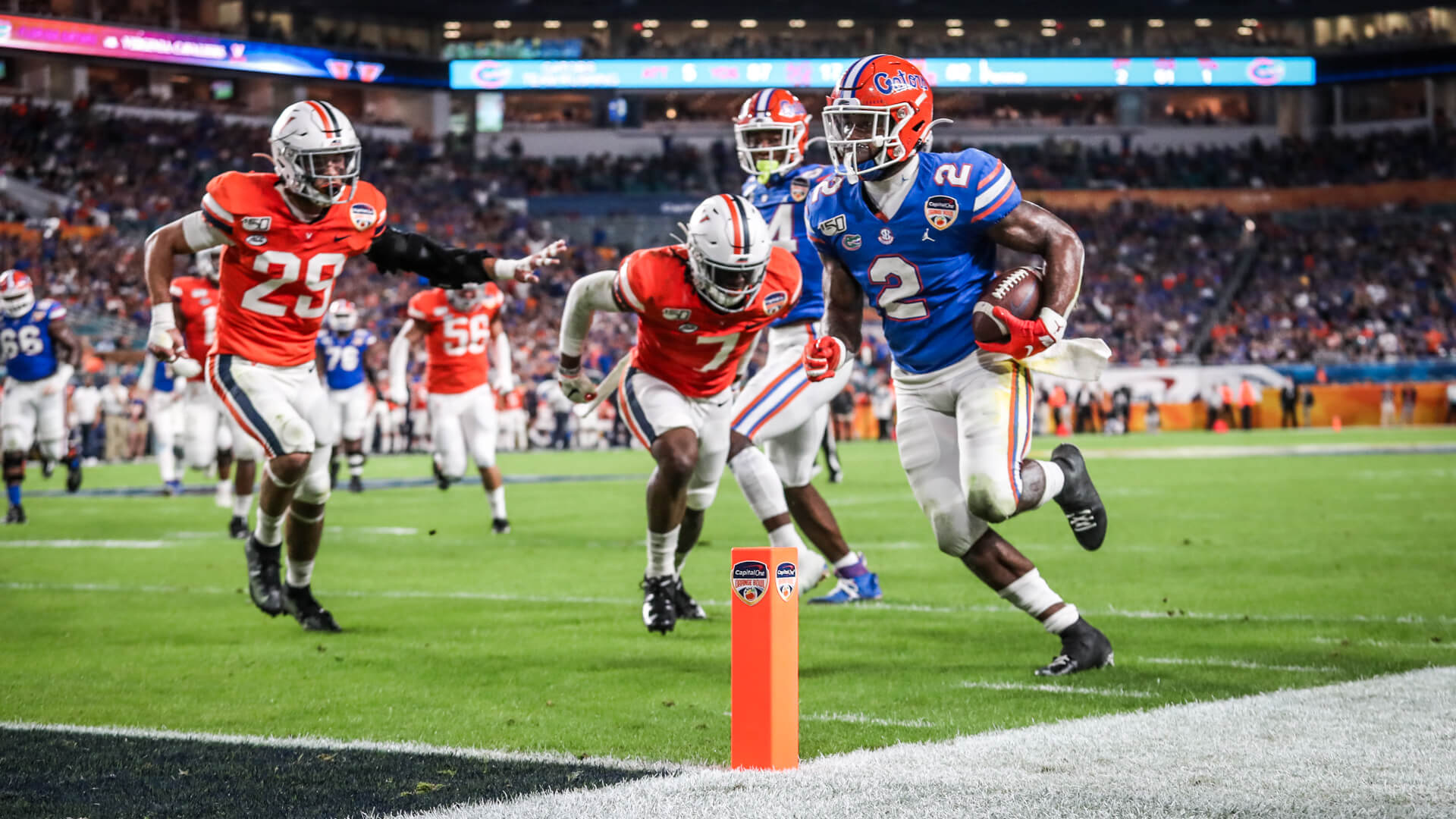 By a few players’ admission, Florida played far from its best game of the year in the 2019 Capital One Orange Bowl. But like they did eleven times this season, they found a way to pull through and get the win anyway- and finish one of the best seasons in Gator history on a sweet note.

LaMical Perine totaled 181 all purpose yards, including three touchdowns, Kyle Trask threw for 305 yards and ran for a score, the defense made just enough plays on what was clearly a down night for them and Florida fought off Virginia, 36-28, to claim the famous Orange Bowl trophy- a literal bowl of orange fruit. With the win, Florida improves to 4-0 in the Orange Bowl game; the Gators also won the 2009 BCS Championship Game, hosted by the Orange Bowl committee, in the same stadium.

Though this game itself was no work of art- Florida got burned by Bryce Perkins over the top multiple times, lined up with twelve men coming out of the quarter break, and let Virginia hang around until the very end- Mullen clearly wasn’t in the mood to make that the focus of the night. “They restored the Gator Standard and are building what we want to build,” Mullen said of his players at the trophy presentation, before joining his players in the tradition of tossing the oranges to the players’ family and friends that had gathered around the makeshift stage inside Hard Rock Stadium.

Perhaps most important was the way that Florida found a way to win a game in which it didn’t play well- a welcome change after ugly home losses to Kentucky and Missouri a year ago.

Right out of the gates, it looked like Florida was headed for a blowout when Perine- an easy call for the game’s MVP Award- broke away for a 61 yard touchdown run on the second play of the game. But moments later, Trask was picked off by Virginia’s Nick Grant, and Perkins made him pay for that by lofting a dime to Terrell Jana to knot the game at seven. Florida then seemingly took control with a methodical 13 play, 75 yard touchdown drive that Trask capped with a quick toss to Perine on a comeback route, who shook a tackle and trotted in for the touchdown.

But Virginia wouldn’t go away. Perkins directed a 14 play, 88 yard touchdown drive to tie the game back up at fourteen apiece on a nine yard touchdown lob to Hasise Dubois in the back of the end zone after escaping a heavy Florida rush. Along the way, Virginia converted a pair of third and eights (the latter of which was the touchdown) as well as a fourth and one.

Luckily, Florida’s offense was more than happy to pick up the slack. The Gators quickly drove down for a go ahead field goal to take the lead for good. That seemed to inspire the defense, which forced its second punt of the day, and then Florida increased their advantage to double digits with another long drive, capped off by a ten yard touchdown run from Perine to make it 24-14 at the half.

Both defenses stiffened coming out of the break and neither offense could do much of anything until Florida mounted a drive late in the third quarter. But that drive stalled, and Evan McPherson kicked a 49 yard field goal to adjust the Gators’ advantage upward to 27-14 after three quarters.

Then, as if somebody flipped a power switch, the offenses found their groove again in the fourth. First, Perkins guided Virginia right down the field for a six play, 75 yard touchdown strike that he finished with a seven yard TD flip to Joe Reed, who skirted down the sideline and found the inside corner of the end zone. But as has been the case all year, the Gators had an answer. Trask found Tyrie Cleveland for a 30 yard strike down the middle of the field to put the Gators deep in Virginia territory, and Perine got them down to the one and nearly scored on a 23 yard run down the sideline. Trask put a bow on the drive by keeping it himself and walking onto the blue Florida wordmark in the end zone on a read option to put Florida up by a dozen with nine and a half to go. The two point conversion failed, so the lead remained 33-21. Florida appeared to have landed a knockout blow when Kaiir Elam snuffed out the Cavaliers’ next drive with a leaping interception inside the Gators’ ten yard line with five minutes to go. And when McPherson paid off Florida’s ensuing drive with a field goal to make it 36-21 after eating half of those remaining five minutes off the clock, the party began among the mostly pro-Florida crowd in Hard Rock Stadium.

But maybe it could have waited just a little bit longer. Because Virginia went flying right down the field again, scoring a touchdown with :38 showing on the clock- a late game development that was more annoying than damaging, as it helped the Cavs cover the 14.5 pregame spread- but Florida made that all academic by falling on the subsequent onside kick to end the game and start the party in earnest.

And yes- despite the lackluster defensive performance, there was reason to party. Florida finished the 2019 season with eleven wins, a feat that improves upon last year’s ten win mark and that the school has now accomplished eight times in its illustrious history. Florida also earned its second consecutive New Year’s Six Bowl win after blasting Michigan in the Peach Bowl last year, which makes Mullen the first coach in FBS history to win New Year’s Six or BCS Bowl games in each of his first two seasons.

The win guarantees Florida will finish in the top ten for the second straight year and the nineteenth time in school history, and makes Dan Mullen the first coach in FBS history to win New Year’s Six or BCS Bowl games in each of his first two years. And pending what happens in the Sugar and Rose Bowls, Florida could sneak into the top five for the twelfth time ever. But most importantly, it serves as a building block for next year.

This year was a successful one by even the sky high standards at the University of Florida. The ultimate goal, though, is to win a national championship, and while this team didn’t accomplish that, it did prove that Mullen is capable of building off of a prior season- even given that that prior season was more successful than the school has been used to this decade. Now, the task falls on Mullen and his team to make another jump forward in 2020. And if anything we’ve seen from the Gators this year was any indication, counting Mullen & Co. out from doing so would be downright foolish.