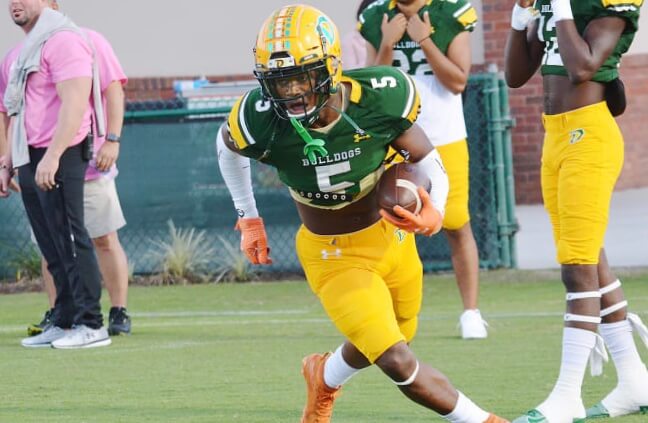 Thanks to more and more high school prospects taking advantage of the early Signing Period in December, Florida’s 2020 Class is more or less set. But the Gators are still alive for several top prospects, any of which could seal this class’s fate as a solid one.

So: who on the Gators’ board goes where?

Enter the sleeper of the 2020 cycle. Beckwith, a three star athlete with offers from Florida, Michigan, Oregon, FSU, Tennessee and both Mississippi schools, seems to be between the Gators and the Vols. Dan Mullen and Jeremy Pruitt each paid him a visit with an assistant in tow last week; unfortunately, Mullen brought Larry Scott, who since that day took the head coaching job at Howard. Beckwith seems to like both schools equally, so this is a difficult one to call, but I’ll go with the bad guys here. Projection: Tennessee

Copy the first three sentences from my synopsis about Gibbs and paste them here for Clayton. I’m just not sold on Knox’s ability to flip big time running backs, even from clearly inferior programs like Colorado. After visiting Florida last month, Clayton took another visit to Colorado and that seemed to reaffirm his status as a Buffalo commit. Crazier things have happened, but Clayton feels like the poster child for saying that about just to rev up the hope among a fanbase only to watch them get disappointed again. Projection: Colorado

John Hevesy has been sneaky good on the recruiting trail, landing seven offensive linemen in the 2019 and then four more in this one, but he seems to be in over his head with Van Pran, a consensus four star prospect who’s been committed to Georgia for six months now. He did visit Florida last month, but that seemed to be just for fun. Unless something goes horribly wrong, he’s a Bulldog. Projection: Georgia

Working in Florida’s favor is the fact that they don’t have a running back committed in this class as well as the fact that the Gators are clearly the program that’s closer to competing for national championships. Working against Florida is the fact that Florida has Dameon Pierce, Malik Davis, NayQuan Wright and Iverson Clement also on scholarship, and the fact that running backs coach Greg Knox has not exactly had a ton of success on the recruiting trail in his two-plus years here. Gibbs enjoyed his visit to Gainesville last month, but it’s not looking very likely with him. I’ll say he sticks with Geoff Collins and the Ramblin’ Wreck. Projection: Georgia Tech

Miami might have something to say about this, but Williams has been high on the Gators for quite some time now and the Hurricanes’ disastrous end to their 2019 season can’t not play a factor for him. He visited both schools last month, and seemed to genuinely enjoy his time on each campus. Florida has a lot more to sell him right now, though, so I’ll go out on a limb and display some faith in Ron English and say that he lands the consensus four star safety from DeLand. If he doesn’t, you can expect Gator fans on twitter to fire English on the spot. Projection: Florida

It seems to be a four team race for Umanmielen between Florida, Baylor, Auburn and Texas. He visited all four schools over the last seven weeks, but he visited Florida and Baylor twice each. That leaves a lot of room to honestly believe he could pull a shocker here, between the production David Turner’s defensive line had last year and the two critical departures at that position (Zuniga and Greenard). But it feels like Florida had too much ground to make up with him since they first offered him late last October. The safe assumption is that he’s staying in state. Projection: Baylor

Announcement time: who the hell knows, but not tomorrow or anytime soon

Technically, the premise of this post is an NSD preview, though I’m including Evans because he’s a part of the 2020 class. But this a mess. Evans’ recruitment is probably going to be the last domino at play in the 2020 recruiting cycle- this definitely won’t be resolved by tomorrow, because by rule it can’t be- and that might actually work to the Gators’ advantage. Or it might not. Mississippi, Tennessee and Texas A&M are all still in the hunt for his services as well as Florida after he sent in a letter-of-intent to Georgia and then suddenly pulled an about face and asked to be released from it (which he was). Look for this battle to play out well into the spring and possibly even the summer before one of the two suitors from the SEC West grabs him. In either case, make it a clean strikeout on running backs this cycle for Knox. Projection: Texas A&M

One thought on “NSD Preview and Predictions: can Gators close its 2020 Class strong?”