Gator Football No, Florida does not have a domestic violence problem. Society has a clickbait problem 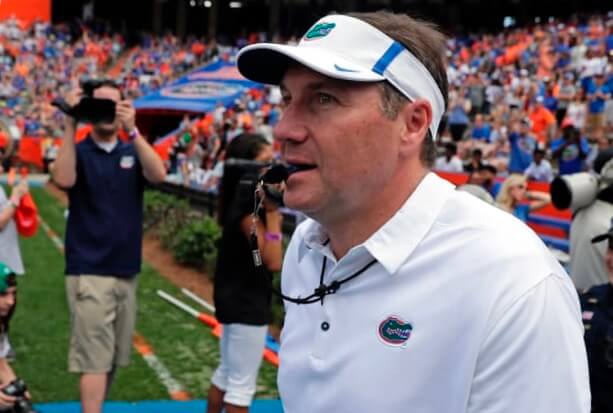 Yesterday, the Tampa Bay Times’ Matt Baker published this article titled, “Five Florida Gators have now been accused of violence against women under Dan Mullen.” The article’s release followed a strangely worded question from Baker during Mullen’s press conference on Tuesday regarding the very subject he used to title his article. Predictably, the University of Florida didn’t appreciate it, and retaliated by blocking off access to the rest of fall practice:

To begin, a quick background. The event that spawned this article was not a pleasant one. It recently came to light that last year, Florida DB John Huggins choked a tutor when she took his phone away- a security measure that the 19 year old woman took to ensure that he would return for the rest of the tutoring session. Put aside the fact that the tutor was a female; putting your hands on someone who is trying to help you succeed in the classroom so that you can remain eligible to chase your dream of playing in the NFL is most decidedly not good. So Mullen suspended him for five games for doing so, as he should have.

But there are several issues with what Baker did in response to that incident surfacing, and unfortunately, they have a damaging impact.

First and most importantly, it is well within the rights of any journalist to ask tough questions as long as there’s a legitimate point to asking them. Meaning, when five members of the Florida football program are accused of domestic violence under someone’s watch, it’s not unfair to ask certain types of questions about it. Because it’s a question that parents of recruits, not to mention fans with moral compasses, deserve an answer to. To further ensure that I’m being fair to Baker, it’s important to mention that he did lay out in his article that four of the five members of the Florida program to be accused of violence against women were booted from the program, and that the fifth (John Huggins) was suspended for five games.

The problem, though, is that not every potential reader of a given article is going to be as diligent in scouring the contents of said article as Baker was in writing it. We’re unfortunate to live in a world where people with substandard levels of intelligence, trolls, and troublemakers have every bit as much power as the careful, level headed and fair members of society. And that’s a huge problem- one that any fair journalist should do his or her best to combat.

Because when the former group of people takes an explosive headline like the one Baker published, circulates that article around the internet and brands Mullen as someone who either enjoys the idea of men causing women physical pain or doesn’t care enough to stop it with social media posts as juvenile as “LOL Mullen and the women beaters strike again!” the damage is done. It ultimately doesn’t matter that Baker listed the punishments for the individuals who committed the violent acts, because rival trolls are either going to skim past those parts of the article or not even read it at all. And when enough people spread that headline, it starts to spread to the people who matter, most notably the parents of prospective future Gator athletes.

But that’s why Baker- and others- do it. The idea that there is an article with a title that promises a list of all the members of the Florida Gator program to do something terrible is too enticing for rival fans to not click on, and clicks, of course, are what drive his business. A more fair way of titling that article would have been something like, “Mullen addresses domestic violence concerns within program,” or better yet, quote his answer to your question in the article title.

That, though, leads us into another problem- the problem that Florida doesn’t have a domestic violence problem, meaning the insinuation that his title implicitly gave off is simply wrong, and that Baker wrote that article anyway.

Now: yes, there’s nothing factually incorrect with the contents of Baker’s article. There have been five different people to be accused of violence against women in his program, but there’s a tremendous difference between that statement at face value and the suggestion it makes that domestic violence is a problem at Florida- which using that statement as an article title unequivocally does.

You see, Florida, Georgia, Alabama, Clemson, Auburn, FSU, Miami, LSU, Oklahoma, and everybody else among the top tier in college football’s prestige rankings more or less recruit the exact same kids, with the exact same backgrounds. For example, Justin Watkins, who was dismissed after kidnapping and strangling his girlfriend, had also previously been committed to FSU and Texas. Had Watkins stuck with either of those previous commitments, that ugly incident would have gone on that school’s permanent record- and it would have just been bad luck, because it’s almost always impossible to know which talented athletes are more prone to doing terrible things when you recruit them.

And in the cases where you do know, because the kid made headlines for doing something wrong in high school (like Jeffrey Simmons), it’s a slippery slope to label a coach as one who condones people doing terrible things just because he wanted to try to rehabilitate him and mold him into a standup young man. Nobody reading this article has gone through life without doing something they should not have, so if you want to slap that “he condones violence against women” label on Mullen for him keeping Simmons around, imagine your parents disowning you and cutting you off because of a mistake you made when you a teenager and see how fair you think that is then.

So the problem of 18-22 year old males being prone to violence is not Florida’s. It could be of the neighborhoods the kids grew up in, the lack of a stable family home, lack of positive influences from adults, or simply the biological makeup of 18, 19, 20, 21 or 22 year old men. But the University of Florida simply is not responsible for this problem taking place on their campus any more than every other major D1 college campus in America- particularly when they kick the offenders out of school immediately upon completing a review of the allegations.

And the last word of that aforementioned paragraph actually sums up the last problem with Baker’s clickbait: allegations, a word that, contrary to society’s belief, does not equal guilt. The American legal system emphatically states that everybody is innocent until proven guilty in a court of law. Of course, not every person who is assaulted wants to pursue a criminal allegation, and that shouldn’t mean the perpetrator shouldn’t be dealt with for his action. But that’s not the point.

As horrendous a clickbait job as Baker’s article title appears at first glance, it’s made even worse when you realize that of those five accusations, only one of them ultimately resulted in charges being levied against the assailant (Watkins). Otis Yelverton’s cyberstalking charges, as well as Brian Edwards’ strangling charges, were both dropped due to insufficient evidence against them, and the accusers of both Jalon Jones and John Huggins declined to pursue a criminal complaint. Now, none of that means any of those four didn’t actually do what they were accused of, but for Mullen to be removing three of those guys from his program and suspending the fourth for five games without formal charges sticking against them hints that he feels the exact inverse about violence against women than that article title sets the trolls up to think.

Again, though: this is all far deeper than most of Baker’s target demographic of rival trolls are willing to go. Nobody who plans to take that article and spread it to every corner of the internet cares about any of that. That’s the problem with the world we live in, and it’s not going to be fixed in the foreseeable future. So the task is on the journalists, writers and media members to craft their text in a way that doesn’t beg to be misinterpreted by the idiots so that false perceptions of coaches can make their way onto the screens of recruits and their parents.

Matt Baker failed at that task. To reiterate, there’s nothing inherently wrong with writing an article about the same genre of no-no’s happening five times under a coach’s watch as long as the facts are there to back it up, but there’s something very wrong with making it knowingly appeal to the human weakness of gathering troll fodder with a headline like that.

And that’s why the onus falls on us as Gator fans to do our due diligence, and be careful what we click on or share.

7 thoughts on “No, Florida does not have a domestic violence problem. Society has a clickbait problem”