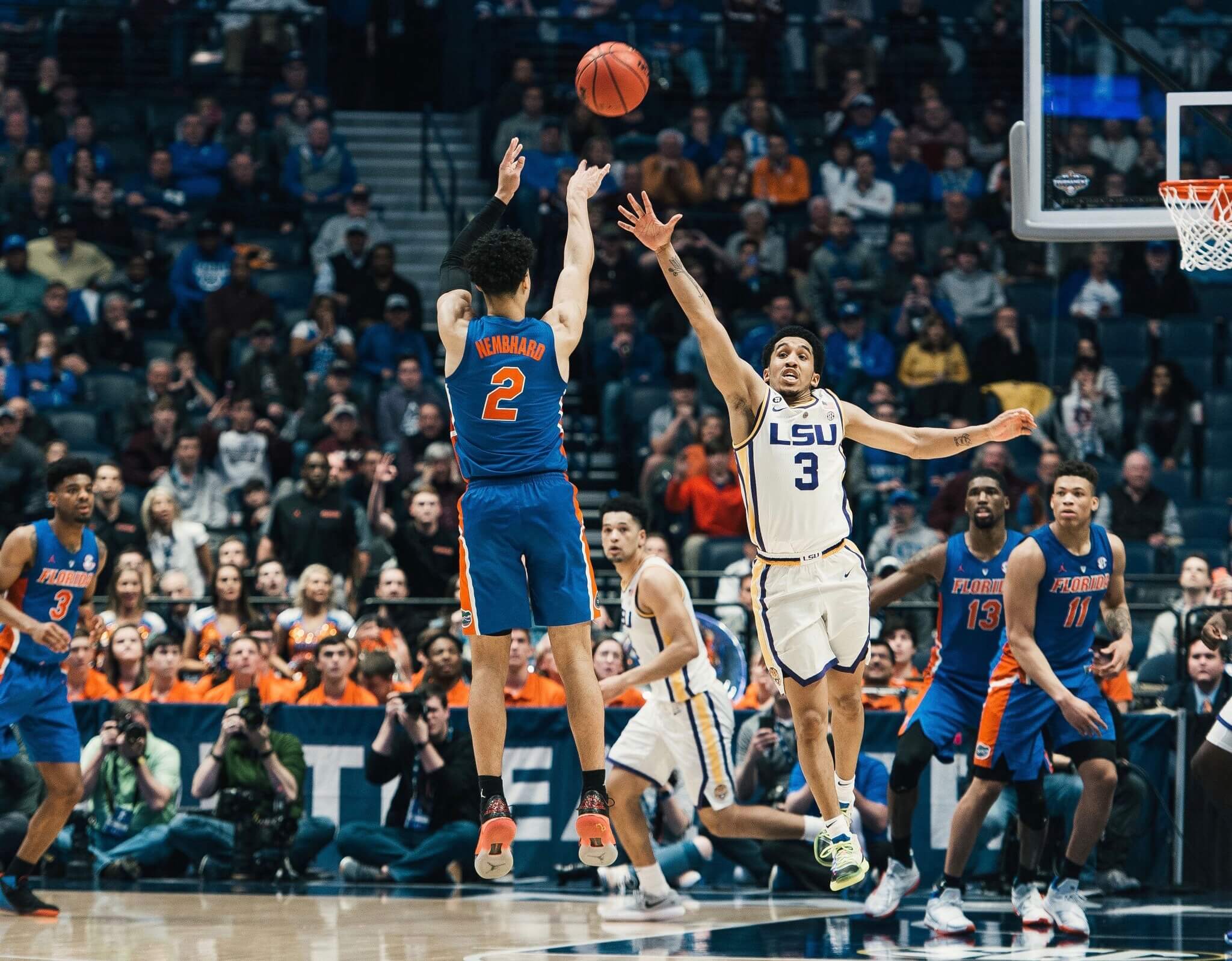 In a spot on the floor not far from where Chris Chiozza sank a miracle shot  to send the Gators past Wisconsin in the Sweet 16 almost two years ago to the day, Andrew Nembhard delivered his own dose of March magic.

In either case, Nembhard just put to rest the notion that this batch of Gators won’t be playing in the same tournament that those Gators did the last two years. Yes, the last time Florida pulled off a shocking victory over LSU, it seemed as though the Gators had locked up an NCAA Tournament bid. But this time, the Gators really did.

Sandwiched in between those two shockers over LSU were three consecutive losses, including one inexcusable one to a Georgia team that finished with its highest loss count since 1956. Now, though, those losses are immaterial, as metrics and bracketologists all unanimously indicate Florida will be playing for the same prize as powerhouses Gonzaga, Duke, Virginia, North Carolina, Kentucky, Michigan and Kansas.

Nembhard made sure of it. The freshman knocked down the game winning three with :1.2 showing on the clock to provide Florida with a 76-73 victory over LSU in the SEC Tournament quarterfinals. By reaching the semifinals, Florida has advanced the furthest in the SEC Tournament since 2014, when they won the event in Atlanta. It also gives Florida its fourth so-called “quadrant one” win of the season- a critical new development on the team’s resume after conference tournament favorites Gonzaga, VCU and Belmont went down.

Keyontae Johnson helped, too. The freshman arrived in Nashville with one double-double on the season, and he’ll enter tomorrow’s semifinal game with three after his second of the tournament, this one to the tune of 16 points and 10 rebounds.

Of all three Florida-LSU games this year- the first two of which went to overtime- this one may have been the craziest.

LSU jumped ahead by scoring the game’s first five points, and quickly blew that lead up to 22-9 midway through the first half. The Tigers continued to keep about ten points of distance between themselves and the Gators through the intermission and well into the second half. It didn’t appear to matter in the slightest bit that LSU was without coach Will Wade, who remains definitely suspended in the wake of an FBI investigation; the Tigers flexed their muscle and used its size to suck down rebound after rebound for second chance points, and Florida never did figure out how to stop Naz Reid, who finished with 26 points. With just under fourteen minutes to go, LSU held a seemingly secure 46-36 lead.

But then Andrew Nembhard found Keyontae Johnson, lost in the blue paint of Bridgestone Arena, all alone for an alley-oop dunk. That changed the entire flow of the game, and little by little, back came the Gators.

Kevarrius Hayes, who had just moments earlier let a pass intended for him slip through his hands and out of bounds when he would have had a fairly easy layup, redeemed himself with a jumper from the free throw line and then a dunk on the Gators’ next two trips down the floor to cut the deficit down to 46-42. From there, the teams essentially traded buckets for the next several minutes.

Then things got weird.

Down 63-60 with four minutes to go, Keyontae Johnson buried a three while a foul was simultaneously called on the floor. LSU interim coach Tony Benford didn’t appreciate the call and promptly got hit with a technical foul. KeVaughn Allen, who the foul was on, made the free throw and then the technical. But before LSU could inbound the bank and get the game resumed, another foul was called, sending Hayes to the charity stripe for two more free throws. He made one of them, capping a six point possession for the Gators.

LSU would grab the lead right back on its next two possessions, but Andrew Nembhard promptly gave it right back to Florida with a driving layup and Hayes then upped it back to three with an elbow jumper. That made it 70-67, but then Reid tied it right back up with a three. Somebody on Florida probably should’ve gotten the message by this point that Reid was a danger to hit threes when given space; they didn’t and he did it again with :13 left on the clock after Florida had recreated its three point edge with some free throws.

That’s when Nembhard came to the rescue.

ANDREW NEMBHARD FOR THE WIN AND THE NCAA TOURNAMENT!!! pic.twitter.com/nDUnLchEc7

Make no mistake. This team is extremely limited, and yes, that reflects less than great on the head coach. But that head coach will now get to say that he coached that limited team to the NCAA Tournament. And if he is indeed going to build a foundation for himself in Gainesville, that’s certainly a strong first step.