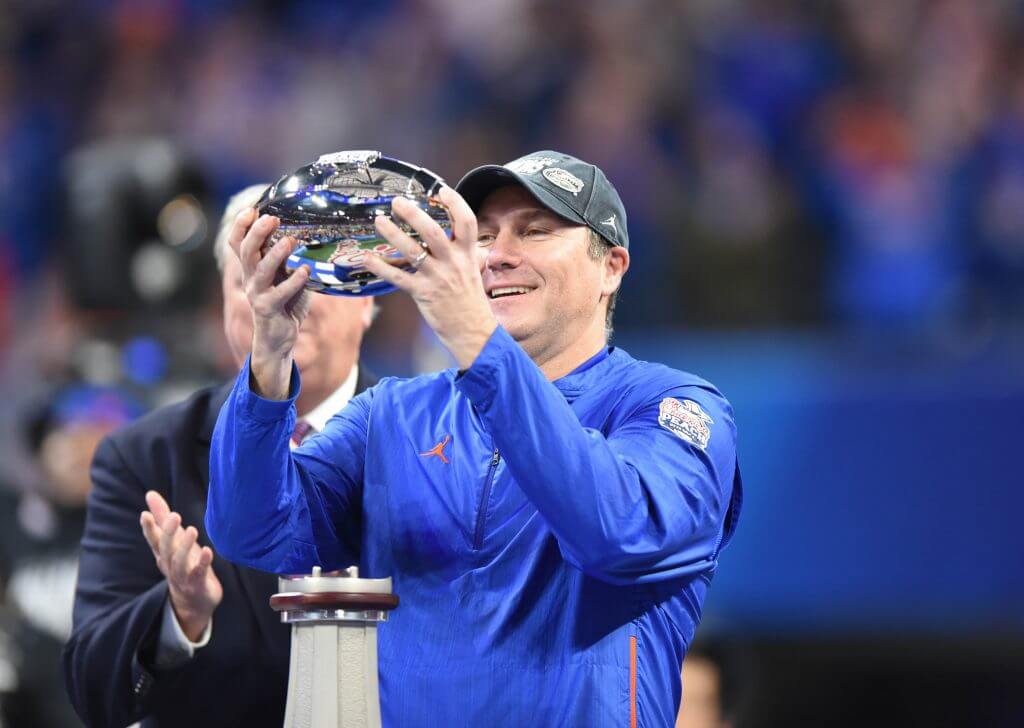 In order to tap into the holiday spirit, and to feel like a kid again, I thought I’d come up with a list of things I want for the Florida Gators.

1: The return of Jajuan Seider. The now-Penn State running backs coach is one of the nation’s elite recruiters, and after two years of separation it’s beyond the point of debate that he’s better at what he does than Greg Knox. Seider worked for Dan Mullen for a couple of weeks at Florida right after Mullen took the job, but rumblings of discontent- and Mullen’s desire of coaching continuity- ended that relationship quickly. I want Mullen to swallow his pride, realize an upgrade is needed- especially if Knox can’t land Jahmyr Gibbs or Henry Parrish- and make the move. I’d even be OK with him keeping some of the other decent, borderline good but by no means great assistants who shall not be named in exchange for Seider in order to maintain that coaching continuity.

2: A new Gator basketball coach. Specifically, a better one. And yes, I do have a long list of options, but that’s a topic for another day. Somehow, Mike White still has a band of supporters left, but I’ve watched this season slowly whittle away at the faith that even his staunchest of advocates possess. We’re well past the juncture in time where one can rationally argue that he is the best fit for this program; now the question becomes if Scott Stricklin is willing to lower expectations for the program and call him and his annual Round of 32 exits “good enough” and/or doesn’t feel like ponying up his $8.75M buyout because his football, baseball and softball programs are dominating their respective sports. He’s not a terrible coach, per se, but somehow that makes it worse because if he was blatantly inept it would make it that much easier to correct the mistake Jeremy Foley made in hiring him. Instead, this program is stuck in purgatory with him: it will never be terrible, but it will never be elite. That’s not good enough. I personally happen to love Gator basketball, and would very much like to be able to objectively believe in its ability to compete for championships again soon.

3: Another College World Series trip for both stickball teams. Tim Walton’s softball program may have lost Amanda Lorenz and Kelly Barnhill, and they definitely won’t be the favorite to win it all, but after landing transfer Charla Echols and years of strong recruiting- not to mention returning Kendyl Lindaman- the pieces are definitely there for a return to OKC. Meanwhile, Kevin O’Sullivan’s baseball program appears poised to bounce back from a down 2019 year with several young bats returning, including Jud Fabian and Kendrick Calilao, and the pitching situation should be much better after a crew of talented youngsters took their lumps last year- and after getting high MLB Draft pick Hunter Barco on campus. Baseball and softball are weird games at times where the best teams don’t always win, but reaching their sports’ grandest stages seems like a reasonable goal for both teams.

4: A win over Georgia next Halloween weekend. I really hate to be so binary with this, especially given what an upgrade Dan Mullen is over his predecessors, but Florida has to beat Georgia in Jacksonville next year or the 2020 season is a failure- with the lone possible exception being that Florida somehow makes the College Football Playoff anyway. Since that seems highly unlikely, I’ll go ahead and say that Georgia IS the Gators’ season next year. Somehow, some way, Kirby Smart gets his Bulldogs to play like the New England Patriots in this game when the rest of their results compare less than favorably to Florida’s against common opponents. A loss isn’t going to place Mullen’s job in the slightest bit of jeopardy, so let’s get that out of the way, but going 0-3 against his biggest rival would leave me wondering what the Gators’ ceiling truly is with him at the helm- even if it’s the only loss on Florida’s suspiciously weak schedule.

5: A year of strong health- meaning, no injuries- for all Gator athletes. The stock Christmas and New Year’s wish of “good health” is best applied to people you know and love, but for Gator purposes, I’m extending it to all those who put on a Gator jersey and compete for the athletics program we all love. Injuries have decimated and derailed potentially strong Gator teams before, so there’s definitely a selfish side to this, but far more important is to remember that student athletes are pushing their bodies to the absolute limit at the highest level anybody aged 18-22 possibly could compete at. Similarly, for those who are injured, here’s wishing you the absolute best in your recoveries. Regardless of how good or bad a player may be- and right now I’m thinking specifically of a now-former Gator quarterback- they all deserve our well wishes in their quests to return to full health in order to once again play the sport they love.