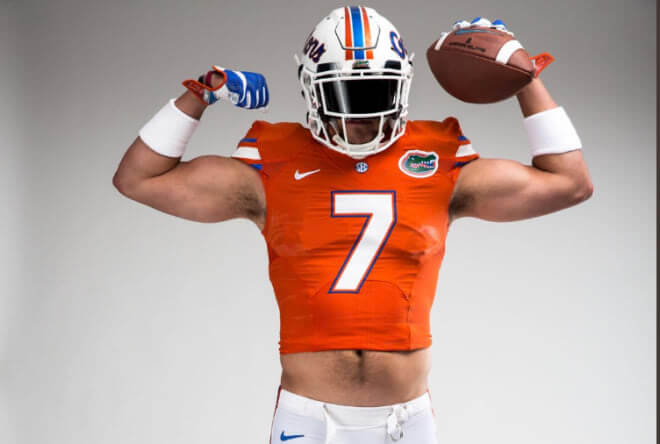 The following statement is true in more ways than one: Florida just got a big commitment.

JUCO tight end Lucas Krull (Shawnee, KS) has chosen to continue his college career with the Gators, picking Florida over Kansas State, Missouri and Maryland. Krull will have three years of eligibility left and can start them immediately this season. The commitment backfills the Gators’ 2018 recruiting class with its third tight end after Kyle Pitts and Dante Lang, and its 20th has overall eligible member- and possibly its most versatile.

Krull initially signed with Arkansas as a left handed pitcher for Dave Van Horn’s baseball team, but soon backtracked on that decision and left for Jefferson Junior College to play baseball there. But Jefferson’s lack of a football program left him searching for another school, and that set up a battle between Florida and Kansas State for his services. Krull’s mom played for the women’s basketball team, while his dad played for Bill Snyder in Manhattan, and Lucas himself admitted that the chance to put on KSU’s purple jersey was special.

Not special enough to keep him away from the Swamp, though.

Krull built a special relationship with tight ends coach Larry Scott, and as a result, will take his freakish talents to Gainesville. Those talents include his 6’7, 255 frame and a 4.55 40 yard dash, good route running and hands, and should Kevin O’Sullivan need another arm in his bullpen, a 98 mph fastball that he can place pretty well. And though he hasn’t played football since 2015, his high school stats- 52 catches for 745 and 15 touchdowns his senior year- are impressive enough to merit serious consideration for immediate, and more importantly, productive time on the field.