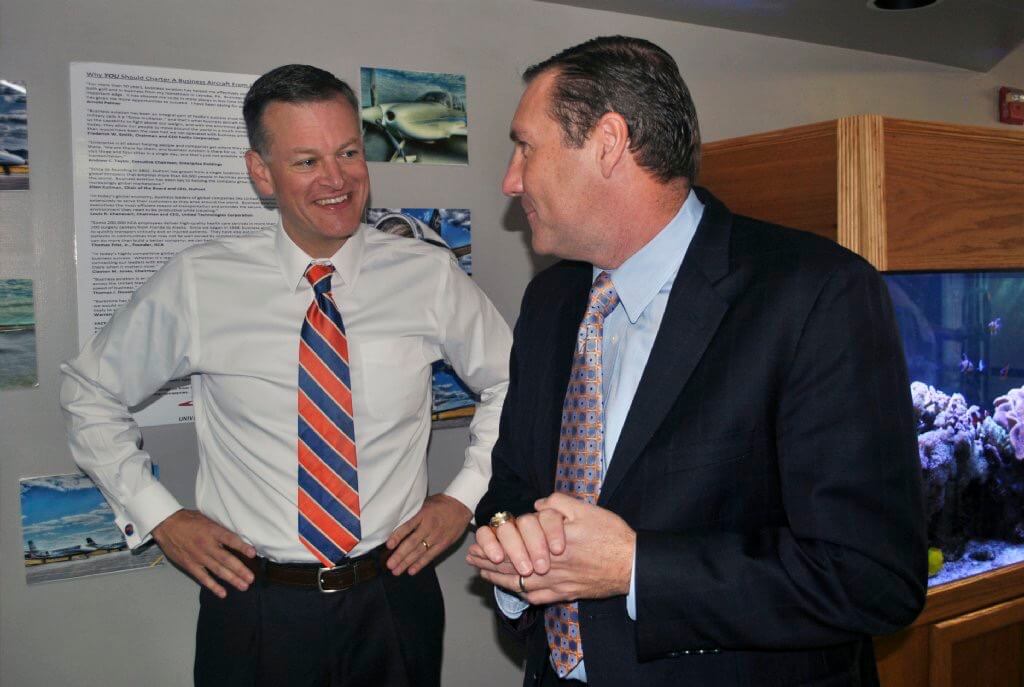 In its constant quest for the spotlight, Central Florida found the wrong one. The Knights’ athletic director, Danny White, went and pulled rank on the Florida Gators.

Not a good idea.

Though not typical, it’s not altogether unheard of for two athletic departments to publicly grapple with each other in regards to their schools playing a football game. The Gators’ athletic department, mind you, was in the midst of one such caterwauling contest with LSU athletic director Joe Alleva just over two years ago. Most of the time, though, the entirety of the discussions take place behind closed doors, and nothing is revealed until a contract has been signed. This was how non-conference games against USF, Miami, and Michigan first came to be known: with press releases detailing the excitement both schools share to be participating in such a game, and without mention of any of the points of disagreement either side verbalized during the negotiations.

This is because when a scheduling deadlock does come to a public pissing match, at least one side is bound to come out looking less than intelligent- which is why any AD with a grain of common sense does everything possible to avoid them. Sometimes, the more foolish ADs- such as Alleva- don’t think about that, and take their side of the story to the court of public opinion despite a laundry list of reasons why they shouldn’t.

But White- who we are all frustratingly reminded of every day is the brother of Gator basketball coach Mike White- one-upped them all.

At a Peach Bowl event last Friday, Florida AD Scott Stricklin was asked about the possibility of playing Central Florida in football. “I’d be OK with scheduling them in the right situation,” Stricklin replied, before declaring that he’d had no contact with White about this subject. When pushed about how a potential Florida-UCF series would look, Stricklin stated that it would need to be a two-for-one scenario, meaning Florida would host UCF twice, and UCF would host Florida once. The Gators and USF agreed to an identically styled three game series to be played in the early 2020’s.

Danny White soon got wind of Stricklin’s comments, and though he indicated interest in playing the Gators, he fails to possess the first prerequisite for actually doing so. It doesn’t seem as though he inhabits the same reality as Stricklin, let alone the same page:

“I’m encouraged to hear that UF is open to the idea of playing us in football. Since I’ve been here, it had been made clear to me there wasn’t much hope of that. Our scheduling philosophy has been transparent since I arrived at UCF — that we’re open to a home-and-home series with any nonconference Power 6 opponent.

“Top-10 programs don’t schedule 2-for-1 series where the balance is not in their favor. Our growing fan base and our student-athletes deserve better than that.”

Really quick on each of those, in order, before I attack it all in further depth: no you’re not, that’s your school’s fault, no it hasn’t, there’s no such thing as the Power Six, you’re not a top ten program, and no they don’t because most people who cheer for UCF do so on a secondary basis behind either Florida, FSU or Miami.

The first problem with White’s statement is his inherent ignorance. The last time Florida played UCF, Percy Harvin ran to South America and back six times in a 42-0 annihilation of the Knights in Gainesville. The teams were slated to play a rematch in 2007, but perhaps afraid of getting humiliated again, UCF paid Florida $100,000 to avoid repeating the experience- a fact that managed to stay silent until just last week. The problem is, regardless of when that fact came to light, now UCF is known to have a history of ducking Florida. So although Danny White may not have been the AD responsible for forking over a six figure ransom to evade a second embarrassment, and although he may say he’s encouraged to hear Florida’s willingness to schedule his school, the recent history of the position that White occupies indicates otherwise.

But his predecessors can be forgiven for their cowardice if White demonstrates a realistic intention to schedule a game with Florida. Which he absolutely has not done.

Because while this may be news to White, Florida and Central Florida are not programs of equal caliber, and it’s not close. In the last 35 years, the Gators have three national championships, seven Sugar and two Orange Bowl appearances, seventeen finishes in the AP top ten, eleven of which were in the top five, and ten finishes atop the SEC standings. And none of that factors in the 2018 season, in which the Gators will play in the newly minted New Year’s Six Peach Bowl and are guaranteed to finish in the top ten again if they win it. As for UCF? Prior to this season, the sum of the Knights’ historical accomplishments were a Fiesta Bowl win over Baylor and a Peach Bowl win over Auburn, which led to finishing 10th and 6th in the AP Poll, respectively.

So the notion that UCF is a top ten program is as far from truthful as one could possibly get. Zero national championships and zero top five finishes for a school since the dawn of time is not the resume of a top fifty program, let alone top ten, yet White seems to equate being ranked in the top ten in back to back years as a reason to label his school as such. And that would be totally fine, in all honesty, if his crusade to bolster his school’s image was a marketing pitch and nothing more. Every school AD is supposed to do that. The line is drawn at the point where the things that come out of an AD’s mouth are contrary to the most easily google-able facts and evidence.

And it’s because of the outright lie that UCF is supposedly a top ten program that Florida is extremely unlikely to schedule a home-and-home series with the Knights. To paraphrase White himself: top ten programs don’t schedule home-and-homes with sub top-50 programs. The University of Florida makes an obscene amount of money every time it has the opportunity to host a football game, and for any competent Florida AD to sacrifice one such opportunity, the school would have to receive a comparable amount of money as retribution. Like, say, north of six million dollars.

So in a way, Stricklin offering to play a two-for-one series with UCF is actually a generous approach, as in the three seasons during which the hypothetical two-for-one would take place, Florida would make time and a half more money by hosting three cupcakes than it would by playing two non conference home games and one non conference road game.

And on top of that, Florida is in the position to be able to demand this. Assuming the Gators are good enough, playing in the rugged SEC plus participating in an annual showdown with FSU is all the schedule strength Florida needs to be able to demonstrate when Selection Day rolls around. It’s UCF that’s in desperate need of strengthening its schedule after getting shut out of the playoff in back to back seasons. For a highly affluent university like Florida, mint isn’t everything, but with the facilities arms race that’s going on across the country, Stricklin is smart enough to not kiss a hefty sum of money goodbye in a proposition that would benefit another school far more than it would his own.

Lastly — and this is more to rub in the Knights’ inferiority than anything, but it’s relevant nonetheless — Stricklin would never be caught dead ordering his team to play a game in UCF’s Spectrum Stadium unless he was plied with a lot of money. The Bounce House, as it’s called, can seat 44,200 people. The Swamp can seat more than twice that and it still wouldn’t be filled to capacity. The only reason Stricklin even agreed to send the Gators on a road trip to USF is that the Bulls play their home games in the Tampa Bay Buccaneers’ Raymond James Stadium, which can hold 65,600 on a normal day and can be expanded to hold 9,500 more. The only natural starting point for negotiations I would have foreseen between White and Stricklin would have been if White agreed for UCF to host its game inside the 65,100 seat Camping World Stadium in downtown Orlando.

And that’s another reason White would be wise to be grateful for Stricklin’s offer to play a two-for-one series. Ideally, the Gator football team would never play a game inside a glorified high school stadium, but they do every other year because Vanderbilt is an SEC school. To willingly do it on an additional, non-mandated occasion would be beneath the level of prestige Florida has built for itself, and yet that’s what Stricklin is proposing.

So if Danny White really wanted to schedule the Gators, as opposed to just wanting to jabber on about them, he’d see that Florida is willing to make a sacrifice and display some gratitude. Opting instead to bait the Gators with grandiose and downright false assertions about his program’s prestige will not only not result in a bite — Stricklin is far too bright to impulsively schedule a home-and-home with UCF with a “oh yeah? We’re not scared, watch this!” attitude — but it will alienate other schools and isolate the Knights as America’s most detested ex-Cinderella. And that status may be fine and dandy with White now, but he will most assuredly come to regret that if and when he drops the “Power Six” charade, realizes UCF will have to join a better conference if it wants to be considered for a national championship, attempts to get the Knights into a better conference, and fails to do so because he doesn’t have anybody else to lobby for him.

Then again, nobody at UCF thinks that far ahead into the Knights’ future. Just ask Scott Frost.

And all of that may sound rather pompous and smug, but to any and all UCF fans who read this and think, “Man, you really think you’re so much better than us,” you know what? Yeah, we do. And we have three national championship trophies to prove it.

17 thoughts on “Memo to UCF, AD Danny White: Play 2-for-1 setup Gators proposed, or shut up”