Gator Football Meet the Makala Trophy, the Florida-FSU rivalry trophy that nobody knows about- but should 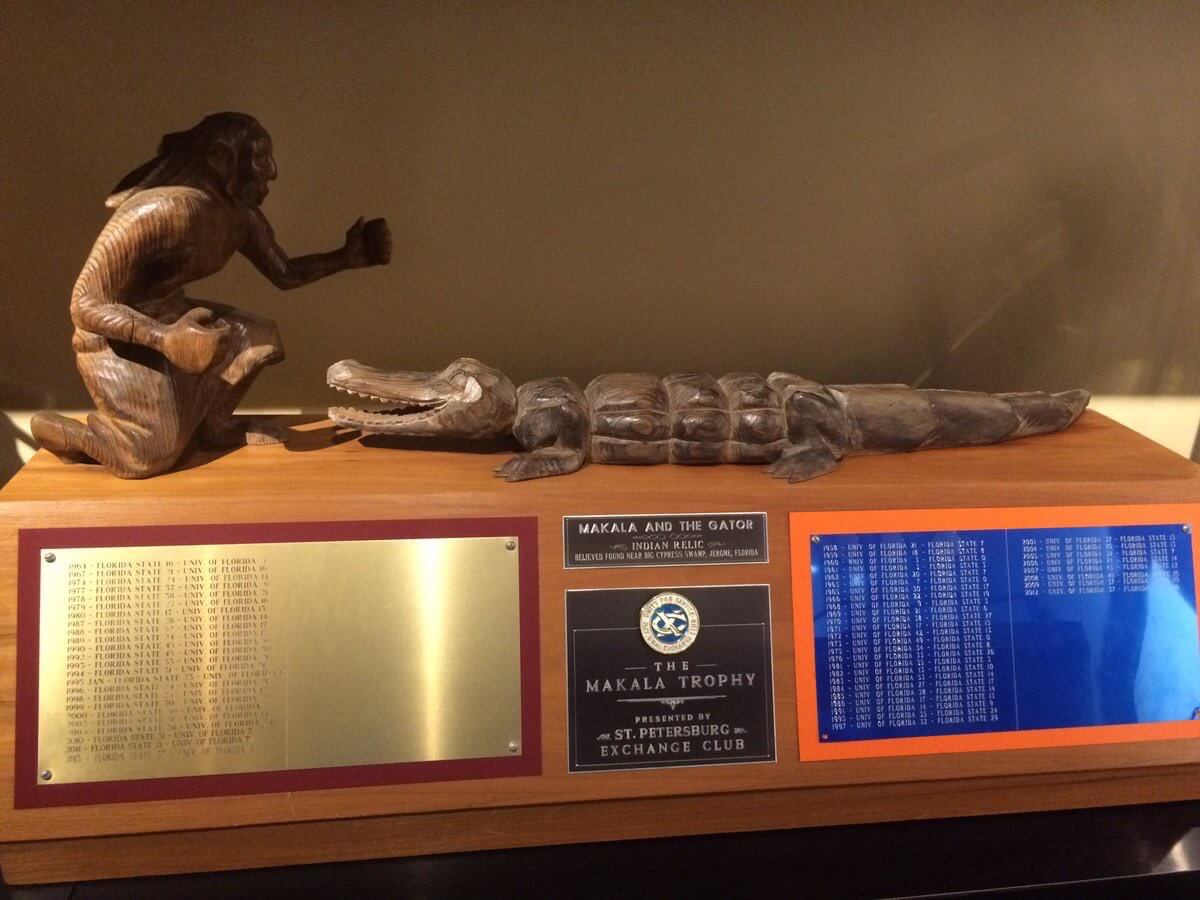 The old wartime cliche says, “to the victors go the spoils.”

Many college football rivalries have adopted this saying into practice by creating a permanent game trophy for the winner to hoist up and celebrate with. The Sunshine Showdown between the Gators and the Seminoles, however, seemingly does not, so the participants have to improvise and create their own spoils. And so moments after Florida was finished pulverizing FSU 41-14 on Saturday, Gator defensive back Chauncey Gardner-Johnson was seen cackling like a hyena, holding up the severed head of a decapitated Seminole Indian doll.

While it drew criticism, the move could only be seen as direct retaliation for what’s become a postgame tradition for FSU in the Sunshine Showdown. After each of the last five years, and in fact as far back as 2003, Seminole players would parade around the field with a chopped-off Gator head after beating Florida. So the thinking behind it is simple: you cut off our mascot’s head and run around with it like a trophy, and we’ll do the same.

Never mind the double standard that surrounds the controversy that Gardner-Johnson created, the cries of racism directed at him as though he was seriously advocating for a genocide of Native Americans. That’s a debate for a different day. The fact of the matter is that most rivalry games- including those far less prominent than the Florida-FSU rivalry- have a widely recognized game trophy. And since it seems as though Florida and FSU don’t play for one, the players settle for cutting off the heads of their rival’s mascot.

But they shouldn’t have to resort to that.

Well, guess what? It turns out that Florida and FSU do play for a trophy. It’s just that for some reason, nobody really knows about it- until now.

Meet the Makala Trophy, the once and hopefully future revered rivalry trophy for the Sunshine Showdown between Florida and FSU. Little is known for certain about its origin, but legend has it that the wooden trophy was carved out in Big Cypress Swamp somewhere in present-day northern Collier County, Florida, by an unnamed Native American leader some time in the 1700’s. The carving was designed to showcase a Native American leader with superhuman strength about to square off with a hungry alligator in a fight to the death, perhaps as a glimpse into the daily lives of the indigenous people who dwelled in the Swamps of Florida.

As many of you who follow Florida and FSU know, there was an, um, “conflict” between the two schools where Florida refused to play FSU in the infancy stages of FSU’s program because of the Noles’ inferior status. Personally, I wish the two schools did play during FSU’s infancy, because Florida’s 35-26-2 all time lead in the head to head series would be even bigger. But in any case, due to the hard feelings on both sides of the rivalry, the trophy was a big deal when the teams finally started playing in 1958. It wasn’t so much a symbol of either the alligator successfully finding its dinner in the form of some Native American flesh or the Native American successfully warding off a threat to his life by spearing the alligator, as its depiction suggests, but rather a solid wooden block of proof that Florida was indeed the superior program. Or, when FSU finally won it in 1964, a wooden block of proof that FSU did indeed belong on the same stage as the big boys.

But after the first few times the trophy was handed out, the novelty of it apparently wore off. In an article for the Gainesville Sun in January of 2008, University of Florida historian Norm Carlson says that the trophy has been handed out to the winner ever since the rivalry started. The award is sponsored by the St. Petersburg Exchange Club, and is presented to the winner at a bipartisan banquet in St. Pete on the weekend of the winning school’s spring football game.

That’s no fun. And Robert Melby, the Makala chairman of the St. Petersburg Exchange Club, agreed with that assessment of the presentation eleven years years ago in that same article for the Gainesville Sun. That article paraphrases Melby as saying that the precise point of the trophy was to find its way into the arms of the winning team’s players on the field while the emotions of winning the game are still high, not to be the focal point of some boring dinner five months after the game.

“We were trying to establish something to represent the rivalry between Florida and Florida State,” Melby said. “I’m originally from Minnesota, and I know the Little Brown Jug is really very important in that neck of the woods. That was the idea behind this, to have a little symbol going back and forth between the two teams.”

But not only has there been virtually no media coverage of the presentation of the award, very few fans seem to even be aware of it, period. That’s a far cry from the goal that Melby stated eleven years ago, and if anything awareness has dropped since then. Other than a few sporadic photos on social media and that one article I linked above, very few people seem to acknowledge its existence.

This beautiful work of art is by far the most creatively designed piece of matter that I have ever seen intended to celebrate the winner of a rivalry game. Golden objects, wood buckets and Paul Bunyan’s namesake are cool because they’re staples of the rivalries they’re crafted for, but look at that trophy again. It looks really cool.

And in the world we live in, where the opinions of 17 year old kids on how cool things are can determine which school they become a star at, that’s all that really matters. Recruits love toying with jersey combinations, so surely they’d love to be able to one day hoist a trophy to prove that they’re state champions. Possession of the Makala Trophy can make a visual impact on a kid deciding between Florida and FSU, as an instant attention grabber that a brief oral recap of the 41-14 beatdown cannot. A simple “see that thing right there, that trophy? That means you play for the best team in the state of Florida. Yeah, come play for me and help us keep that!” can make a tremendous impression on a kid.

Luckily, some of the dirty work in terms of getting the winning team to carry the trophy off has already been done. A trophy already exists, which is good, and that means we don’t have to spend hours trying to think up a concept, a design and a name for it. It already has the engravings of the previous matchups’ scores on it, which means that we don’t need to convince the schools to pay for someone to go back and etch all the scores in there. And it already is presented to the winning school.

All that needs to be done now is to get the schools to agree to enhance its prominence. Have your boring banquet one last time this April, and force FSU to fork it over, but this time send some of your beat writers to cover it- and maybe orchestrate an announcement that starting with the 2019 game, the winner of the Sunshine Showdown will get to carry it off the field.

Enough with cutting off the heads of your rivals’ mascots. Let’s make the Makala Trophy the real spoils of the annual Florida-FSU war.

6 thoughts on “Meet the Makala Trophy, the Florida-FSU rivalry trophy that nobody knows about- but should”