Gator Football In midst of hellacious month, perspective is needed: Florida will be just fine 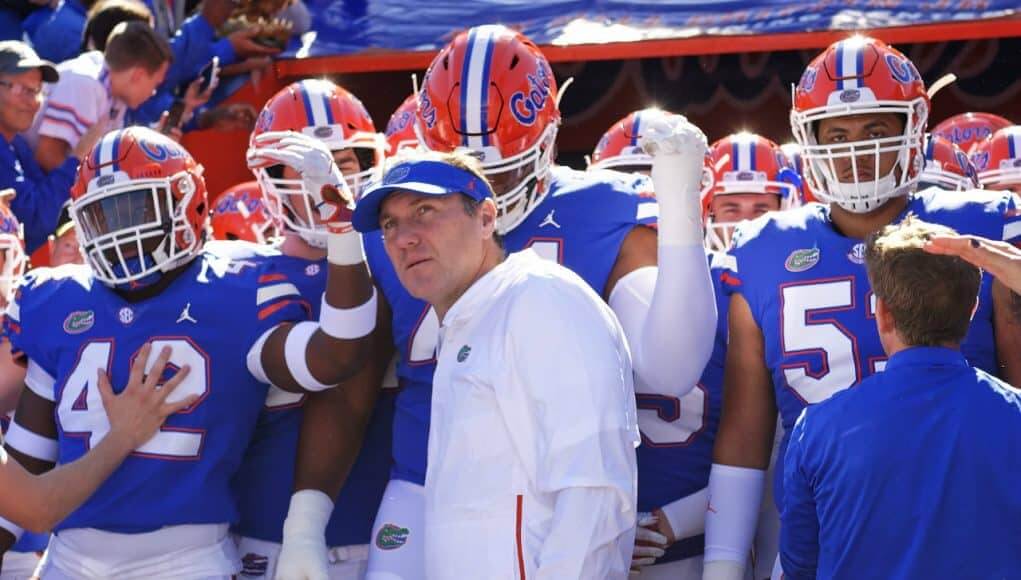 And that perspective is key given how dreadful May has been so far.

The stage was set on the final day of April, when QB Jalon Jones entered his name into the NCAA transfer portal. Within minutes, a slew of ugly accusations against Jones popped up and pretty soon it became clear that UF had narrowly dodged the displeasure of dealing with a Title IX case.

From there, things only got worse. Bad news cascaded down on the program: five star Class of 2020 Lakeland running back Demarkcus Bowman spurned his hometown Gators in favor of Clemson, junior DB Brian Edwards was arrested for allegedly choking his girlfriend, the crown jewel of the 2019 class, Chris Steele, entered the transfer portal, highly sought after 2021 commits Bryce Langston and Trevonte Rucker backed off their respective pledges, and top linebacker signee Diwun Black announced that he would not be academically eligible this season and would have to divert to JUCO. And we are still, on May 15, not even halfway through this month.

Of course, with the bad news, things quickly turned ugly. Chris Steele’s decision to enter the portal spawned a wave of conspiracy theories regarding his motivation to do so, namely some tweets back and forth between himself and Jones- a major hole in the narrative that he wanted to transfer because he told Florida staff that he wanted a new dorm room because he was worried that his roommate (Jones) would get him into trouble one day. Public opinion of Dan Mullen- granted, from those with substandard levels of intelligence, but still- plummeted. Several Florida receivers took their unflattering opinions of Chris Steele to twitter, posting photos taken from practices with Steele in less-than-ideal positions, and Tyrie Cleveland went one better, matching a thread Steele created defending himself, and his level of play, by quote tweeting each one with sarcastic applause emojis.

And all of that is an insultingly brief recap of the fifth month of 2019 so far. Call it karmic payback for the waves of 14,000 and #DidSomething tweets, call it a reality check for a program that’s already far exceeded expectations under Mullen, or call it whatever else you want. The fact of the matter is that the last couple of weeks have been nothing short of a nightmare.

Or so it seems.

There are certainly going to be some lasting impacts from all that’s gone down recently. For instance, depth. Florida has now lost a linebacker, a defensive back, possibly another defensive back pending the situation with Edwards, and a quarterback that were presumed to be eligible to contribute in 2019, a top tier 2020 running back, and a defensive end and a receiver who were expected to come in and play in 2021. So now Florida has to go out and recruit those positions all over again, effectively wasting the time and effort Mullen and his staff put into doing so the first time around.

But depth is about the extent of the damage that’s been done with this hellacious month. The Gators did not lose a single player who was going to be counted on to play a major role this season, and so with another strong season and another strong recruiting class that stems from it, Mullen and Florida can render this entire avalanche of a stretch completely irrelevant.

For once, the Gators are actually stockpiled at QB, with Feleipe Franks proving more than able to run the offense and the heir apparent Emory Jones waiting his turn. I’ve been more than clear about my desire to temper expectations for Franks in 2019, but there’s no denying that he is at least serviceable and potentially a championship-caliber quarterback when he plays his best. Jalon Jones was not going to beat him out, and he was not going to beat Emory Jones out for the backup role. And in the event that catastrophe strikes the quarterback room, you could do a lot worse than Kyle Trask as your absolute emergency quarterback option. So losing/booting Jones doesn’t do much damage, particularly now that Anthony Richardson has recommitted.

The loss of Black hurts a little more at the linebacker spot, but again, it isn’t as though he was Sharpied in as a starter. David Reese has the middle linebacker spot nailed down, with two able backups in Ventrell Miller and Rayshad Jackson waiting behind him, and Florida was always set to rely on Amari Burney and James Houston in the outside linebacker role. Depth is a far bigger concern here than at quarterback, though, so again, losing Black is definitely not good– but it’s ultimately survivable barring a wave of injuries at the position.

As for the secondary, we saw why having a surplus of reliable players back there is better than not against Georgia, when Jeremiah Holloman abused CJ McWilliams throughout the day in a game that was otherwise pretty much dead even. That was the result of cornerback #1a (Marco Wilson) tearing his ACL in week two, cornerback #1b (CJ Henderson) leaving that game with an injury of his own, safety Brad Stewart mysteriously not playing and thus unavailable to help over the top, and leaving an overwhelmed DB on an island and far out of his element. So with that in mind, losing Edwards (a safety) and Steele (a corner) could certainly become an issue. However, while unmistakably talented, Steele was never going to supplant either Henderson or Wilson on the depth chart, nor would he have passed Trey Dean. To boot, Florida has two other four star cornerbacks signed in the class of 2019 in Kaiir Elam and Jaydon Hill, so any situation in which Steele would have played as a freshman will not result in a monumental drop off for Florida with either of those two in the game instead. And we’ll have to see what happens with Edwards before we can draw any long term conclusions.

So while nothing that has taken place this month has been good, it’s not the apocalypse some are making it out to be. Do remember, Mullen took a 4-7 team that had players paying their own way for a better strength and conditioning program to double digit wins and a New Year’s Six Bowl victory. The past few weeks have been a fingerprint smudge compared to the rubble that Mullen inherited. Florida essentially has the exact same two deep on its depth chart that it had before this tsunami came crashing down on it aside from possibly Steele at the nickel position, and though losing a playmaker like Bowman hurts, Florida is stacked at the running back position and has ample time to recruit ensuing generations of runners. And I really can’t bring myself to care about losing commitments from guys who won’t be signing their LOI’s for another 21 months.

Last year assured me that Florida will move past this and be just fine when all is said and done. And if somehow I’m wrong about this, it will be subsequent mishaps, and not the ones that have taken place these last two and a half weeks, that will do Florida in.

One thought on “In midst of hellacious month, perspective is needed: Florida will be just fine”