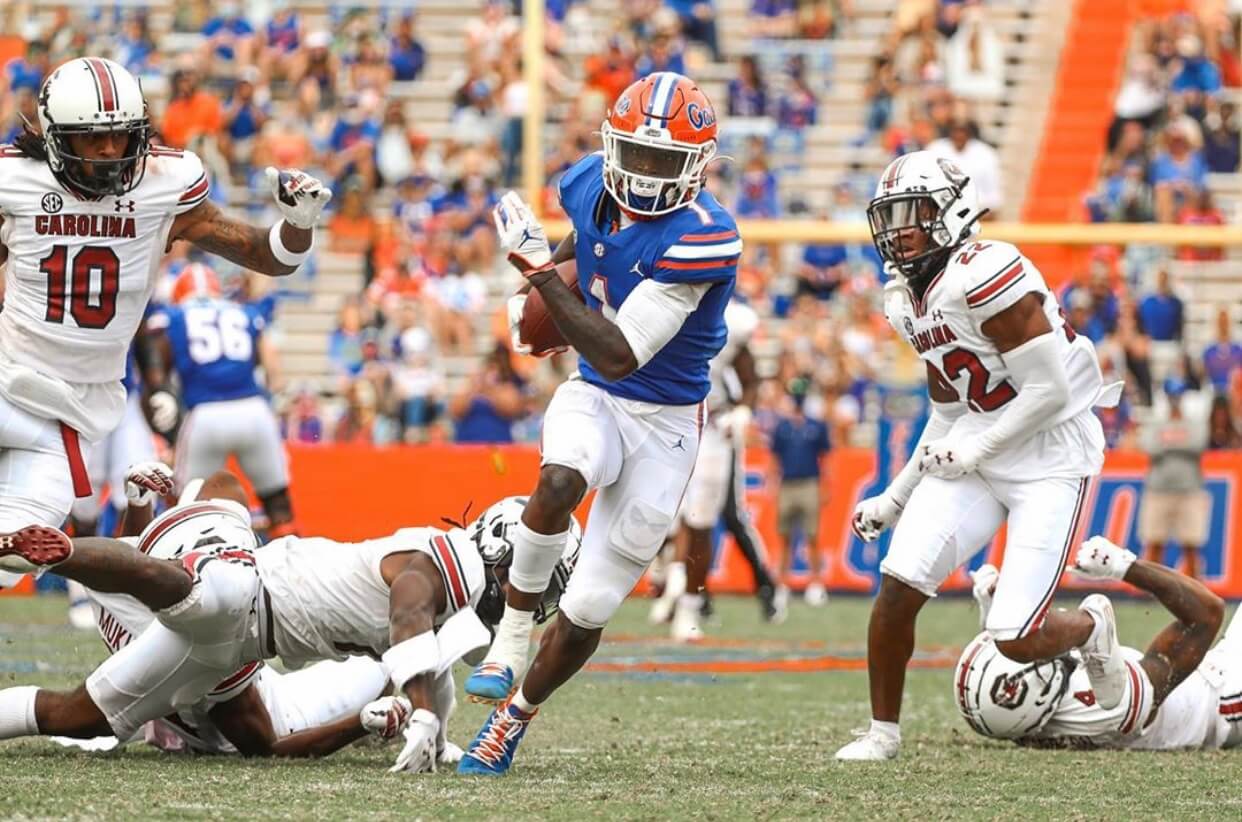 The various struggles the Florida Gators have endured on defense didn’t matter too much in their first two games against Mississippi and South Carolina.

They might in their next game. And they almost certainly will later in the season.

Kyle Trask tossed four touchdown passes— two of them to Kyle Pitts— and Zach Carter paced the defense with eight tackles and a sack and a half as Florida shook off an early deficit to beat South Carolina, 38-24, in the Swamp. In doing so, Florida improves to 2-0 in the unique conference-only 2020 setup. The Gators also improve to 4-1 all time against old boss Will Muschamp.

South Carolina— now 0-2, and perhaps nearing the end of the Muschamp era after a 4-8 record a year ago— hung around early and had its chances late against a suspiciously sluggish Gator defense. But Muschamp’s team took its sweet time rather than pounce on those chances, and as a result, their coach took his latest loss at Ben Hill Griffin Stadium in a career filled with them.

The Gamecocks drew first blood. Collin Hill took the field after the opening touchback and promptly commandeered a 12 play, 75 yard touchdown drive that Kevin Harris capped off with a two yard run. Florida quickly replied to that with an eight play scoring jaunt that ended with Dameon Pierce cutting back on a counter and trotting into the end zone to tie the score.

The Florida defense then forced a rare three and out, and the Trask-led offensive machine then took advantage with another quick scoring drive. This time, the Gators covered 69 yards on just five plays, the last of which was an easy toss from Trask to tight end Kyle Pitts to cover the final thirteen yards and put Florida up 14-7.

The Gators seemed set to break the game open after forcing another punt, but then Trask fumbled on a strangely timed designed quarterback keeper. South Carolina expressed their gratitude for that with a quick touchdown march, finished off by a pass from Hill to Shi Smith. Florida bounced back, though, tacking on an Evan McPherson field goal and another inter-Kyle scoring hookup from Trask to Pitts sandwiched around a defensive stop. That made it 24-14 Florida at the break.

Florida came out of the gates strong in the third quarter, again appearing primed to turn the game into a laugher. Hill immediately put the ball on the ground and Ventrell Miller fell on it to set the Gators up in Gamecock territory. Four plays later, Trask found Gainesville native Trent Whittemore in the back of the end zone for six to adjust the score to 31-14.

Smelling blood on the next defensive series, Zach Carter blew through the line and sacked Hill to force a punt. Three plays later, Trask hit Kadarius Toney on a seemingly innocuous crossing route for a first down to midfield. But Toney had bigger plans. The electric playmaker made five different defenders look silly on their attempts to tackle him on what turned into a 57 yard catch and run and six points. That made it 38-14 late in the third quarter.

Then, Florida’s defense— which had looked bad in the first half but significantly stronger throughout the third quarter to that point— showed more reason for concern. The Gators missed tackles. They failed to both set the edge and clog the gaps at the line of scrimmage on running plays. Players appeared out of position on some plays, and cornerback Marco Wilson was beaten multiple times. James Houston IV did blast his way through the line of scrimmage for a diving sack, and youngster Andrew Chatfield did announce himself with a big sack of his own, but other than that, South Carolina was able to do pretty much whatever it wanted offensively the rest of the way.

Which was why, in one of the most mind-boggling displays of situational unawareness to ever take place in the Swamp, Muschamp displayed zero interest of piloting his back back into the game.

First, Muschamp ordered a meaningless field goal down 38-14 with :28 remaining in the third quarter to shave the deficit down to 21. And after a bad decision by Trask on his own end of the field that Israel Mukuamu intercepted early in the fourth quarter, the Gamecocks chose to dink and dunk their way toward the end zone rather than show any sense of urgency against a Gator defense that appeared confused. The slow boat to China routine required eleven plays and nearly four minutes to reach the end zone— 39 yards away. Nonetheless, reach the end zone they did, on a nine yard pass from Hill to Harris with ten minutes remaining.

But Muschamp and his team saved the most astounding piece of offensive malpractice for last. After forcing a Florida punt, South Carolina got the ball back with 8:11 remaining. The Gamecocks chewed nearly all of that time off the clock, allowing the play clock to dwindle inside of five seconds before taking the next snap and not once dialing up a deep passing play as they again crawled down the field.

It came down to a fourth and goal with :55 remaining. On the play, Hill broke right and appeared to have his choice of methods in which to score against a badly beaten Gator defense. He had both ample room to tuck the ball and run it in himself and an open Shi Smith to toss it to in the end zone. But his throw was off target, and Florida got to run out the clock and watch Muschamp trudge out of the Swamp with yet another disappointing loss— as if anything else could have reasonably been expected after eating 90% of the remaining time off the clock on a drive that needed to be one of two in a row that finished in the end zone, and not even getting there on that drive.

Florida, as it stands, has a lot of problems defensively. The offense wasn’t great down the stretch— the Gators could only generate 21 yards in the fourth quarter— but that can be pardoned as an anomalous bad stretch for a unit that had moved the ball at will throughout the first three quarters. Not only did Florida get burned on some third and longs again, but the Gators allowed South Carolina to consistently run the ball between the tackles and move the chains several times per possession. Against a team with more offensive firepower and additional options of moving the ball— like, say, the Kellen Mond-led Texas A&M team that the Gators face next week— this can’t happen.

But that’s a next week problem, which will play out on an entirely different day than the one on which Florida looked vulnerable against the Gamecocks. The Gators will prepare for that day this week, and if the problems continue on that day, the defensive issues might be something we have to prepare to live with the rest of the season.

For now, though, Florida will have to be content with knowing that it has one of the most explosive offenses in the country that can outgun any team it faces on its best day, and can still outshoot most teams even on a bad day. And if LSU last year was any indication, that might, just might, be enough to earn this team a spot in history.