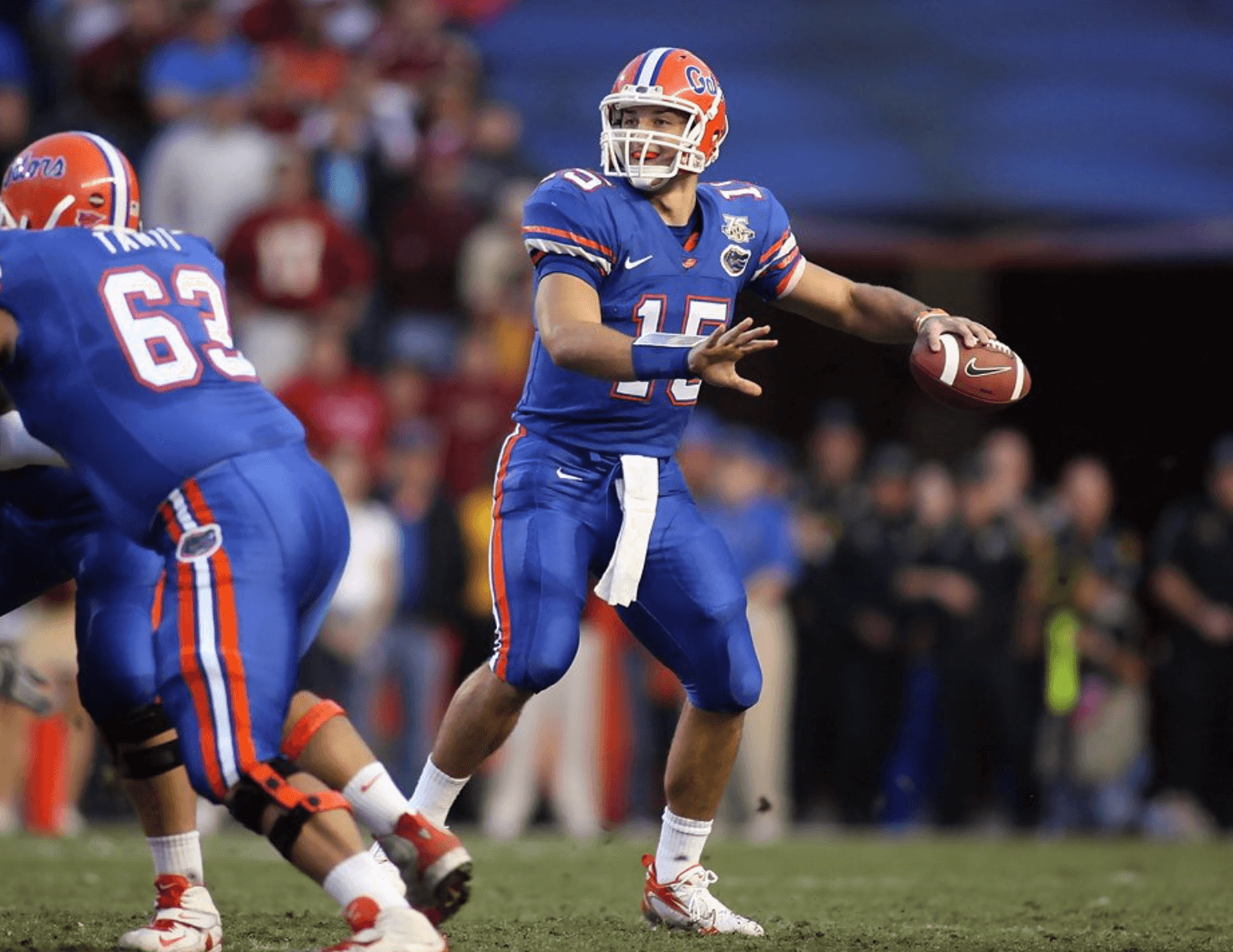 For those who have been keeping track of the #GreatestGatorEver tournament, the excitement level has reached yet another all time high, as it does with the completion of each round.

For those who haven’t, it’s not too late to be introduced to the event. Here’s (a very abbreviated synopsis of) the deal: back in May, I put together a massive bracket of what I deemed the 256 best athletes to ever play a sport (any sport) for the Florida Gators, with fans voting on each matchup on twitter and Facebook to decide the winner. The 256 athlete event was divided into sixteen Regionals of sixteen players, with the #1 seeds in each Regional sorted bracketologically so that the winner of the 1 Regional (aka the #1 overall seed, Tim Tebow) would face the winner of the 16 Regional (the #16 overall seed, Preston Tucker, who didn’t make it out of the Regional), the winner of the 2 Regional would face the champion of the 15 Regional, and so on. The idea was to create a fun distraction to help get us all through the unprecedented global timeout we’re facing amidst the COVID-19 pandemic.

Though we’ve hit a couple of speed bumps with it, such as Facebook removing polls (which forced me to divert the rest of the voting to our Instagram story, as well as twitter) and a rabid group of non-Gator gymnastics fans with nothing better to do than try to derail the tournament by resorting to spam voting and creating a frightening number of fake accounts so that they could vote for their gymnasts a dizzying number of times, I would say it’s worked.

Between all the matchups in the Round of 256 through the Round of 32- the Regional stage- literally hundreds of thousands of votes have been cast in the tournament. A few dozen of the athletes themselves and even current Florida softball coach Tim Walton have gotten involved to campaign for their athletes. And now, with the field of 256 whittled down to sixteen and only the true Gator legends remaining, it’s time to let those last sixteen battle it out for your votes and decide once and for all who the #GreatestGatorEver was.

But the schedule for the remainder of the #GreatestGatorEver tournament has changed a bit. I created this event under the impression that football wouldn’t happen this fall; therefore, this tournament was supposed to run through Thanksgiving weekend. When it became evident that we would be set to have football beginning in late September, I adapted, condensing the schedule as much as I could to get as much of the tournament completed before the start of football season as possible while also giving each matchup as much space on its own as I could. It’s all still TBD, of course, as COVID-19 outbreaks can still happen and throw the planned season into disarray, but for now, here’s the plan:

The #GreatestGatorEver Sweet 16 will be held over the next three weeks, concluding by Sunday, September 13th. These matchups last four days each. The Elite 8 will be held the week beginning Monday, September 14, and last for the next week and a half, concluding a few days before the Gators open their season against Mississippi on September 26th. Like the Sweet 16, the Elite 8 matchups will last for four days. I did consider cramming the semifinals and finals into the pre-kickoff time block as well, but that would result in the whole thing being harried and each matchup competing for real estate on people’s social media feeds with a lot of other content. And since this whole tournament is likely a one-shot deal (who knows, maybe I’ll do it again in twenty years or so?), I feel as though that dilutes it and doesn’t give the greatest amount of people the opportunity to give it the attention that it deserves. And on top of that, I need to leave some days open for other types of content, such the release of new podcast episodes, other articles and of course the 2020 version of the annual Florida-FSU chart that has become a staple of the In All Kinds Of Weather brand.

But anyway: that leaves us with the matter of the Final Four and championship matchups (each of which will run for seven full days) and when, exactly, will they be played? The answer is “I’m not totally sure.” I will say that I’m eyeing four blocks of time to potentially run the final two rounds: the Gators’ bye week before the Georgia game in the last week of October, the conference-wide bye week prior to the SEC Championship Game the week beginning December 7th, the space in between the College Football Playoff Selection Show on December 20th and the CFP Semifinals on New Year’s Day 2021, and the space between the CFP Semifinals and the CFP Championship Game on January 11th.

Naturally, that’s all very tentative. How the SEC and college football as a whole deal with COVID-19 could have a lot to do with this, of course, and it may wind up that the last two rounds both get pushed into 2021 if that’s what I feel it will take to get the most eyeballs on them.

In the meantime, stay safe, stay healthy, be sure to check out our latest podcast episode with Chris Doering in the meantime and I look forward to seeing this once-in-a-lifetime tournament finally settle the debate of who the Gator Nation deems was the #GreatestGatorEver.