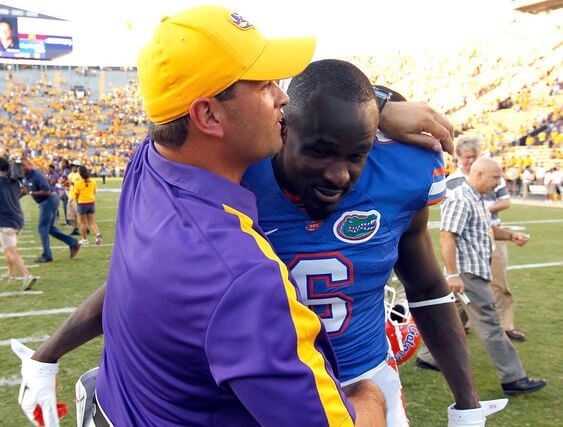 Yesterday, we began our “Getting to Know” segment of the Gators’ new coaching staff with defensive coordinator Todd Grantham. Today, we move on to his counterpart on the opposite side of the ball and take a look at co-offensive coordinator and wide receiver coach Billy Gonzales.

Breakdown: Though perhaps he’s most known for a fight with Percy Harvin that he says never happened, Gonzales’s history with wide receivers dates back even before Harvin’s time. He’s been around the block, to say the least, and his deep experience with wide receivers can only mean that the Gators intend to throw the ball, and possibly a lot. He was the last wide receivers coach to have any success at Florida, generating big numbers from the likes of Riley Cooper, Andre Caldwell, Percy Harvin and Louis Murphy. After leaving Florida for LSU, Gonzales bounced around a little before reuniting with Mullen in Starkville. Over the last four years, Mississippi State has enjoyed 18 games where at least one wide receiver has eclipsed 100 yards receiving. That alone is enough to be excited by him, but then throw in his recruiting ability and you’ve got another top notch hire.

What to watch for: slow, but steady and reliable game to game improvements from Coach G’s has become a staple of his coaching career. Gonzales also has a knack for drawing up well-designed plays that, when executed correctly, put his skill position players in great position to make plays. He utilizes mismatches as well as anybody in the country. Expect to see a healthy mix of tunnel and throwback screens to guys like Tyrie Cleveland and a lot more variety in terms of play calling in general. Florida has plenty of speed among its wide receivers, but a position wide struggle to get open last year piled onto the team’s perfect storm of woes. If nothing else, Gonzales should fix that.

One thought on “Getting to know the Gator staff: co-OC, WR coach Billy Gonzales”