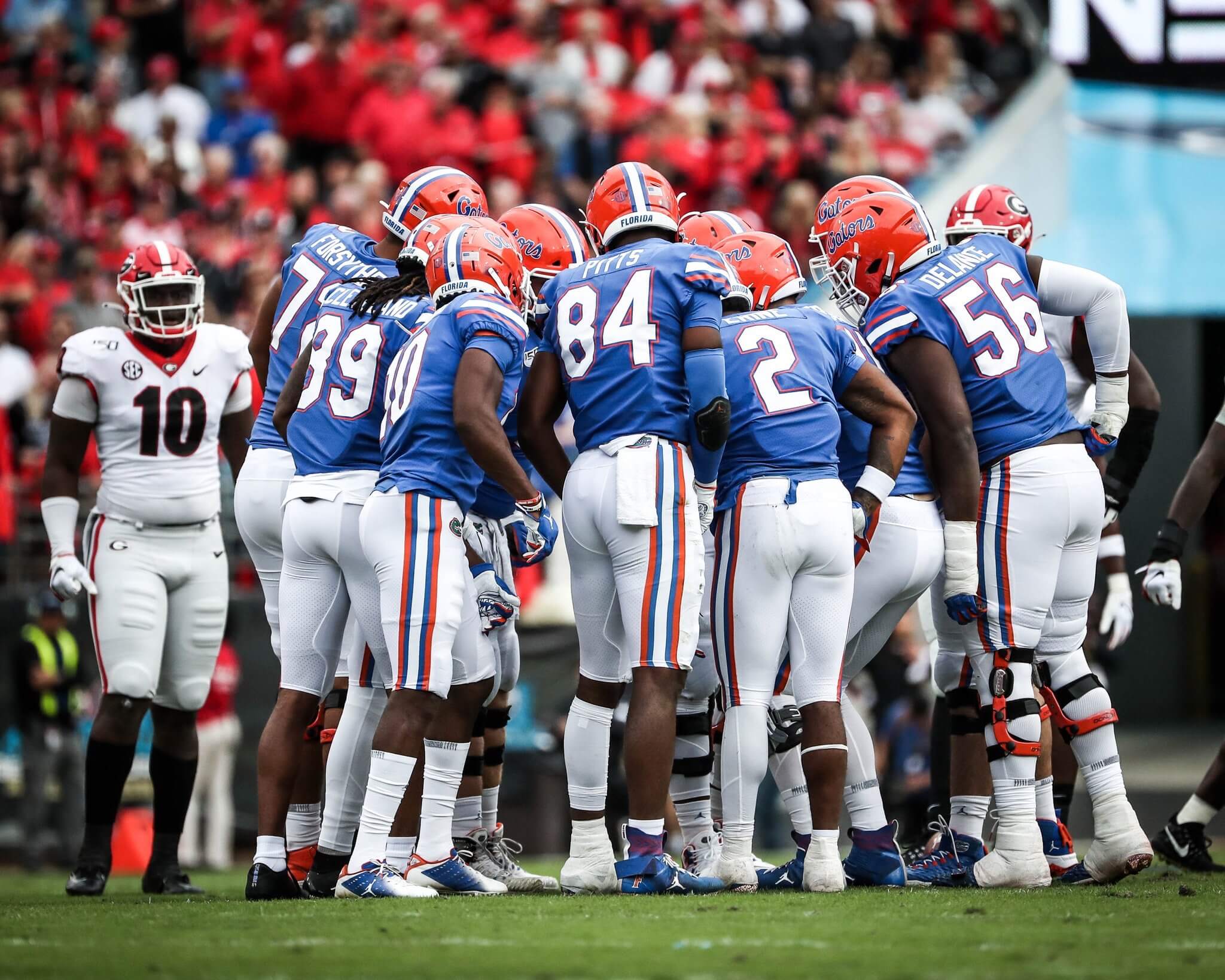 The College Football Playoff committee unveiled its first batch of rankings for the 2019 season in between games at the Champions Classic in Manhattan last night. And surprise, surprise, Dan Mullen’s Gators found themselves ranked in the Top Ten with four weeks of the regular season plus conference championship week still to go.

Quick aside: When I built this website, I took a vow to never sugarcoat, pump sunshine or outright publish things that I did not believe simply to boost morale among the Gator fan base. In all kinds of weather, I will always pull for the Gators, but that doesn’t mean I’m going to lie to make fans feel better. There’s a line to walk between those two sides of things. So what I’m not going to do is sit here and write falsehoods about how Florida has some mythical case to be one of the four best teams in the country, or one of the four most deserving of being included in the CFP, because Georgia extinguished any such opportunity for me to do so. I will never go to bat for a case, cause or hypothetical situation that I do not truly believe in, and after this past Saturday, I cannot say in good faith that this Gator team objectively has any business competing for a Playoff spot.

…but after Tuesday night, none of that matters. The reality is that with a full month remaining in the 2019 season, Florida sits behind just five other teams outside the top four. Which means that although the Gators’ CFP chances are slim, they are greater than zero point zero percent- a lot greater, actually- assuming they win out. And if Florida can escape a road trip to Missouri, where the Tigers usually play well, their odds of winning out skyrocket with Vanderbilt and FSU teams in the gutter as their only two other remaining opponents.

Of course, they’d need a fair bit of help.

First, they need to make sure teams behind them can’t jump them, and luckily that doesn’t seem to be too big of an issue this year. If the Gators win out, there are only two possible teams that could conceivably jump them (Baylor and Minnesota), and both of them will play multiple games against higher ranked opponents between now and the CFP Selection Show.

Baylor, who has put together an 8-0 record against mostly lower-end competition in the Big 12, now has to run a gauntlet of TCU, Oklahoma and Texas in its next three games, and presumably Oklahoma again in the Big 12 Championship Game. Minnesota has a similar story, having run up an 8-0 record against weaker foes but now has to deal with a trifecta of ranked teams in Penn State, Iowa and Wisconsin between now and the first weekend of December; should they make it there, either a rematch with Penn State or a showdown against the current #1 team in the CFP rankings, Ohio State, awaits them. So it’s well within the realm of possibility that not only will these teams lose games and not jump over Florida as an additional undefeated team, but that they could each lose multiple times.

Excluding those two interlopers, there are really nine teams competing for two playoff spots, and therefore eight teams that Florida needs to lose- and many of them play each other, so it’s not that farfetched of a possibility. Alabama and LSU are probably both going to get in no matter what (unless one of them loses multiple times down the stretch). Which leaves Ohio State, Penn State, Clemson, Georgia, Oregon, Utah, Oklahoma, Florida and Auburn.

So in order by team, here’s what needs to happen:

1: Ohio State. One of Ohio State or Penn State has to lose when they play, but that’s not enough. Luckily, the Buckeyes still have to play at Michigan, who could be looking to sneak back into New Year’s Six contention after an ugly start to 2019.

4: Penn State. Ditto the above for Penn State, but swap Michigan for Minnesota. The problem will be that Minnesota would probably jump Florida with that win, but then the Gophers would earn themselves another date with a top five team in the Big Ten title game. The ideal situation would be for the Lions to lose to Minnesota, beat Ohio State, have Michigan beat Ohio State again, have a lower ranked but much more battled tested Wisconsin team take care of Minnesota on Thanksgiving weekend and then lose again to Minnesota in Indianapolis. That would probably knock all three Big Ten teams out of the race.

5: Clemson. The Tigers are probably going to the CFP. The only potential stumbling block looks to be Wake Forest, as NC State, South Carolina, and the entirety of the ACC Coastal division appear to pose a combined zero threat. Then again, Clemson did lose to Pittsburgh two years ago, so if something crazy happens, Florida’s chances go from small to legitimate.

6: Georgia. Terrible as that loss this past Saturday was, Georgia is actually the team Florida is most likely to see lose and fall behind them- and additionally, the team they need to lose the most. The Bulldogs should beat Missouri, but Texas A&M coming to town and a road trip to Auburn provide a pair of realistic opportunities for them to lose. If that happens, the Gators would actually win the SEC East and advance to Atlanta, where they’d suddenly have an opportunity to not only beat a top ranked team in LSU or Alabama, but gain that additional badge as a conference champion the committee puts so weight behind. Every other “this team could collapse this way” only opens the door for the Gators to tread water and back into the CFP as a divisional runner up; this is the only route Florida has to actually improving its resume and capping it with a bang.

7: Oregon. The Ducks’ remaining schedule isn’t too daunting, but a road trip to Arizona State could be worth keeping an eye on. And who knows, Arizona or Oregon State could pull a surprise. Oregon would also have to face Utah in the Pac-12 title game, but that only knocks one of them behind the Gators.

8: Utah. The Utes are even less likely than the Ducks are to lose one of their final three games with bad UCLA, Arizona and Colorado teams left. Worth noting, though: both teams losing a game before they meet for the Pac-12 title isn’t a necessity. All that needs to happen is for them to each take a loss between now and Selection Sunday. So the most likely road for this to happen is for ASU to beat Oregon, and then Oregon to beat Utah to create a two-loss Pac-12 champion.

9: Oklahoma. The Sooners now have to face a pair of ranked teams before they even get to the Big 12 title game in Baylor and Oklahoma State. And their other two games, against Iowa State and TCU, aren’t pushovers either.

11: Auburn. The Tigers need even more help than Florida since the Gators beat them head to head, but they also have the added ability to do some nice leapfrogging before the season ends. Auburn has its two biggest rivalry games coming up: the Deep South’s Oldest Rivalry against Georgia, and the Iron Bowl against Alabama- both on the Plains. Ideally, Auburn would beat Georgia and then lose to Alabama, rendering them a three loss team and impossible to rank over Florida.

Now sure, that’s a lot of stuff that needs to happen, much of it unlikely, in order for Florida to sneak into the CFP, but what’s important to keep in mind is that there’s still the entire month of November plus the conference championship games left to be played. So while not likely, it absolutely is possible. And anybody who’s followed college football long enough knows that the month of November is where things get the craziest.