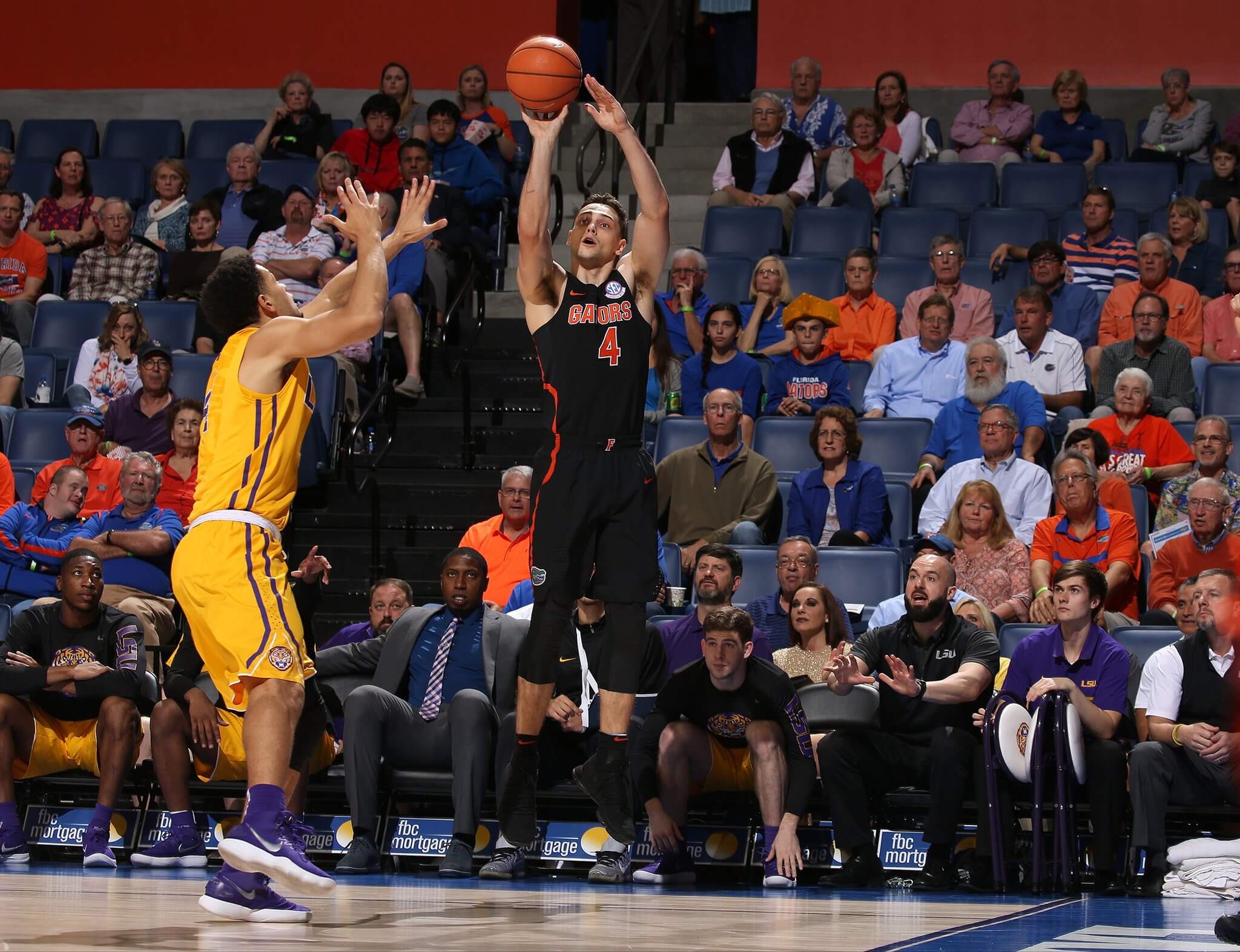 Somewhere, LSU AD Joe Alleva is quietly grumbling into an empty stairwell that this particular Florida-LSU battle should have been fought in Baton Rouge, too. But unlike their counterparts on the football team, the hardwood Gators managed to overcome their  issues to score a win over the Tigers in their return trip to Gainesville.

Florida used 18 points from Jalen Hudson, 12 more from argot Koulechov and a 15-1 explosion to open the second half to fend off a struggling LSU team, 73-64. Coupled with an Auburn loss, the Gators somehow find themselves just two games behind the Tigers (the Auburn ones, not the LSU ones) for first place in the SEC.

Even in a victory, though, the Gators didn’t look like a first place team.

The first 20 minutes of the game were pretty much what we’ve come to expect after watching their last three SEC games. Florida shot 40% from the field in the first half and trailed throughout it, even falling behind by as many as nine. The Gators also got manhandled on the glass (again) and hoisted up what felt like an endless string of ill-advised shots. It was the kind of performance that, as any neutral observer would tell you, looked worse than the stats said it was.

But then Jalen Hudson and Egor Koulechov came along. Hudson buried a three that gave Florida its first lead of the day forty seconds into the second half, and then Koulechov drained back to back threes to highlight the aforementioned 15-1 spurt. The Tigers briefly battled back to claw within 52-48 midway through the second half, but that was followed up by back to back buckets from Michael Okuaru and Keith Stone, and in the blink of an eye it was back up to eight to seemingly create some breathing room.

The keyword is seemingly, because then Florida completely came apart at the seams. The Gators then embarked on one of their cold stretches, allowing LSU to launch a 13-2 run to take the lead back on a Brandon Sampson dunk. Stone hit a pair of free throws to put Florida back on top, but then Tremont Waters’ jumper gave the Tigers the lead back again.

For what it’s worth, I’m choosing to highlight all the back and forths in this game against a 13-10 LSU squad because it’s otherwise difficult to fathom just how close Florida came to the abject disaster of losing its fourth straight conference game last night, three of which would have been at home and all of which would have been to teams beneath them in the SEC standings. The Gators’ big wins over Kentucky, Gonzaga and Cincinnati will go a long way with them in terms of the NCAA Tournament, but they won’t serve as a complete white-out job if they lose too many more games. Florida is in serious danger of missing the Tourney now, a new and shocking development after beating Kentucky in Lexington, but with too many losses like the ones they’ve suffered regularly the last few weeks it might become reality.

Thankfully, this story has a happy ending. Hudson scored eight of his eighteen in the game’s final five and a half minutes, including an and-one to seal the deal with a little more than a minute to go. Additionally, there’s something to be said about Florida winning the final four minutes of the game by a 5-0 margin, and, you know, winning a game in which they didn’t play very well.