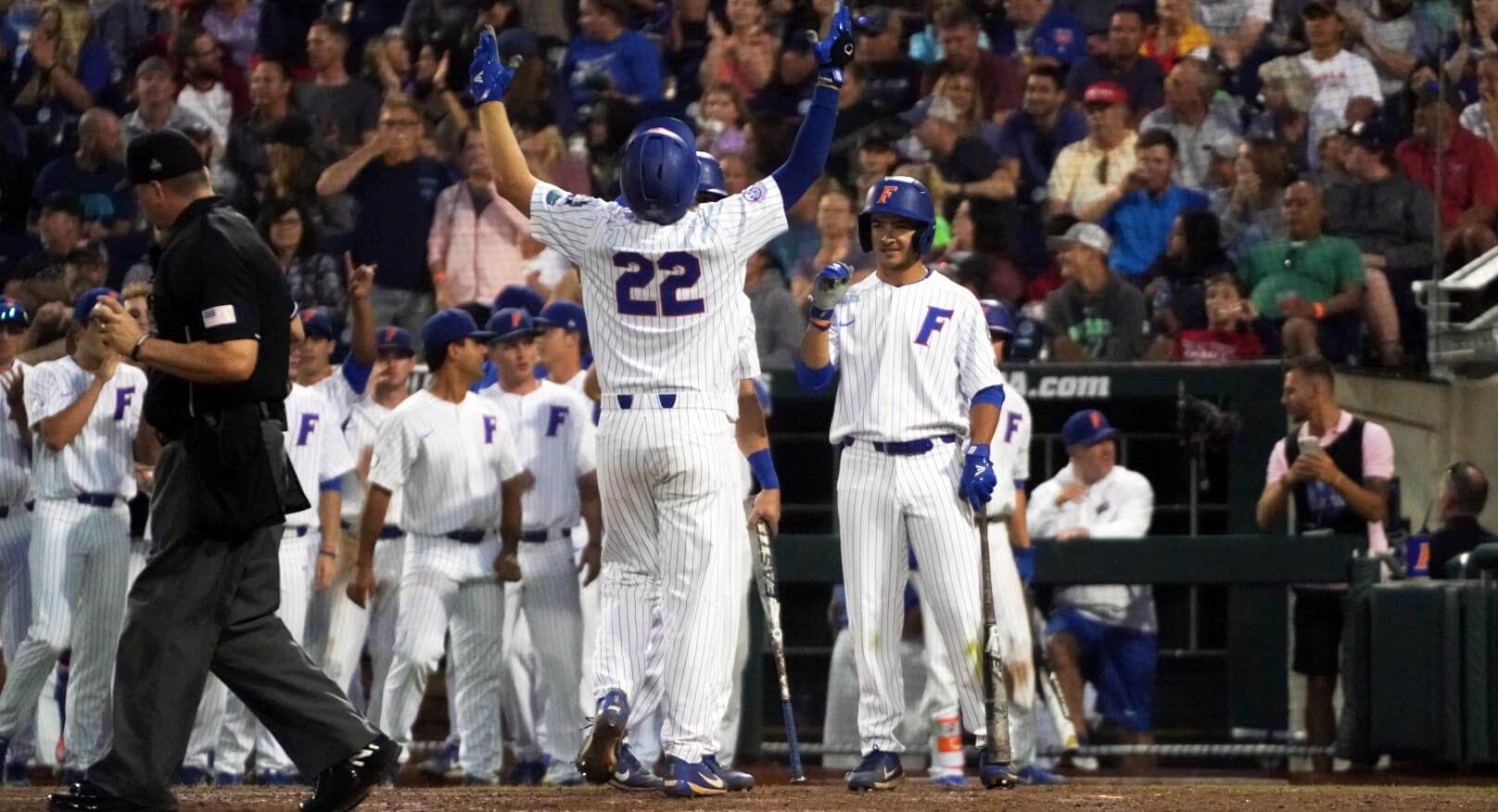 And finally, after far more heart stopping of a final three innings than they had to be, the Gators remained the last team standing, winners of a truly epic offensive war against Texas Tech that sent them back to the College World Series semifinals for the third time in the last four years.

Nobody would’ve predicted the type of late inning fireworks that took place from watching the first half of the game, though.

Jack Leftwich got the start for Florida, and promptly worked himself into and then out of major trouble in each of the first two innings, with a mid 50’s pitch count. However, not only did he escape both sticky situations unscathed, he then settled down and shut down the Red Raiders over the next four innings with much greater efficiency, including a five pitch third inning. The only real trouble he found himself in was giving up a pair of hits in the fourth, but that damage was negated by an awesome diving catch from left fielder Austin Langworthy, who made the easy toss back to second to double off the runner there.

Florida, meanwhile, could only manage one run in the first four innings, and they didn’t even put the ball in play to do it: Jonathan India walked, took second on a wild pitch, stole third and then scored on another wild pitch in the fourth inning.

But the Raiders’ blunders must have inspired Florida, because the Gators came out swinging after that. Deacon Liput plated Florida’s second run of the game with a scorching RBI double, and moments later he scored on Nelson Maldonado’s RBI groundout. And Florida appeared to put the game away in the sixth when Wil Dalton rapped a clean single to left and came around to score on a towering blast from JJ Schwarz- his first ever homer in four years at the College World Series and Florida’s 100th of the season.

Then it was Texas Tech’s turn.

The Red Raiders immediately started a rally with two base hits to start the seventh. That forced Kevin O’Sullivan to replace Leftwich with Andrew Baker, and Baker walked the bases loaded before surrendering an RBI single to Brian Klein. Baker departed in favor of Tommy Mace, who gave up another RBI single to Josh Jung, slicing the lead down to 5-2. An error by Deacon Liput then made it 5-3 before Jordan Butler came in and finally cleaned up the mess with a strikeout and lineout to Wil Dalton in right.

The Gators immediately retaliated with three runs of their own in the top of the eighth. Dalton got the party started with a double into the left center field power alley, and was brought around to score on two straight productive outs. Blake Reese then reset the table by whacking a double to left field, and Brady Smith took care of him with a mammoth blast off the top of the wall in dead center field that resulted in a triple. Moments later, Nick Horvath brought him in with a hard liner that caromed off the top of the shortstop’s outstretched glove and into center field to make it 8-3.

Texas Tech had one final salvo in them, though. Hunter McMullen loaded the bases on two walks and a single sandwiched around two quick outs, and then allowed another RBI single to Jung to cut the lead down to 8-4. McMullen then departed for closer Michael Byrne, who instantly gave up a two RBI double to Grant Little to score two more and cut the lead in half.

Then Byrne locked in.

Zach Rheams flied out to center to end that eighth inning threat and strand two more. Florida added one final run in the top of the ninth on an error, and Byrne then orchestrated a workmanlike, 1-2-3 ninth inning that ended on a harmless groundout to second base.

And thus the Gators survived, the triumphant team of warriors in a noble battle. This was one of the great games in college baseball history, a truly classic tale that members of both teams will tell their grandchildren when they tuck them into bed 50 years from now. Florida’s prize for winning it is a date with Arkansas tonight in the semifinals, a matchup that the Gators would need to win twice in a row to advance past due to them falling into the elimination bracket.

Florida and Arkansas have played four times this year, and split those four games. So you know what that means: get ready for another all out war between one team that’s won seven consecutive elimination games and one of only three teams to beat Florida twice this year.

Neither team would have it any other way.