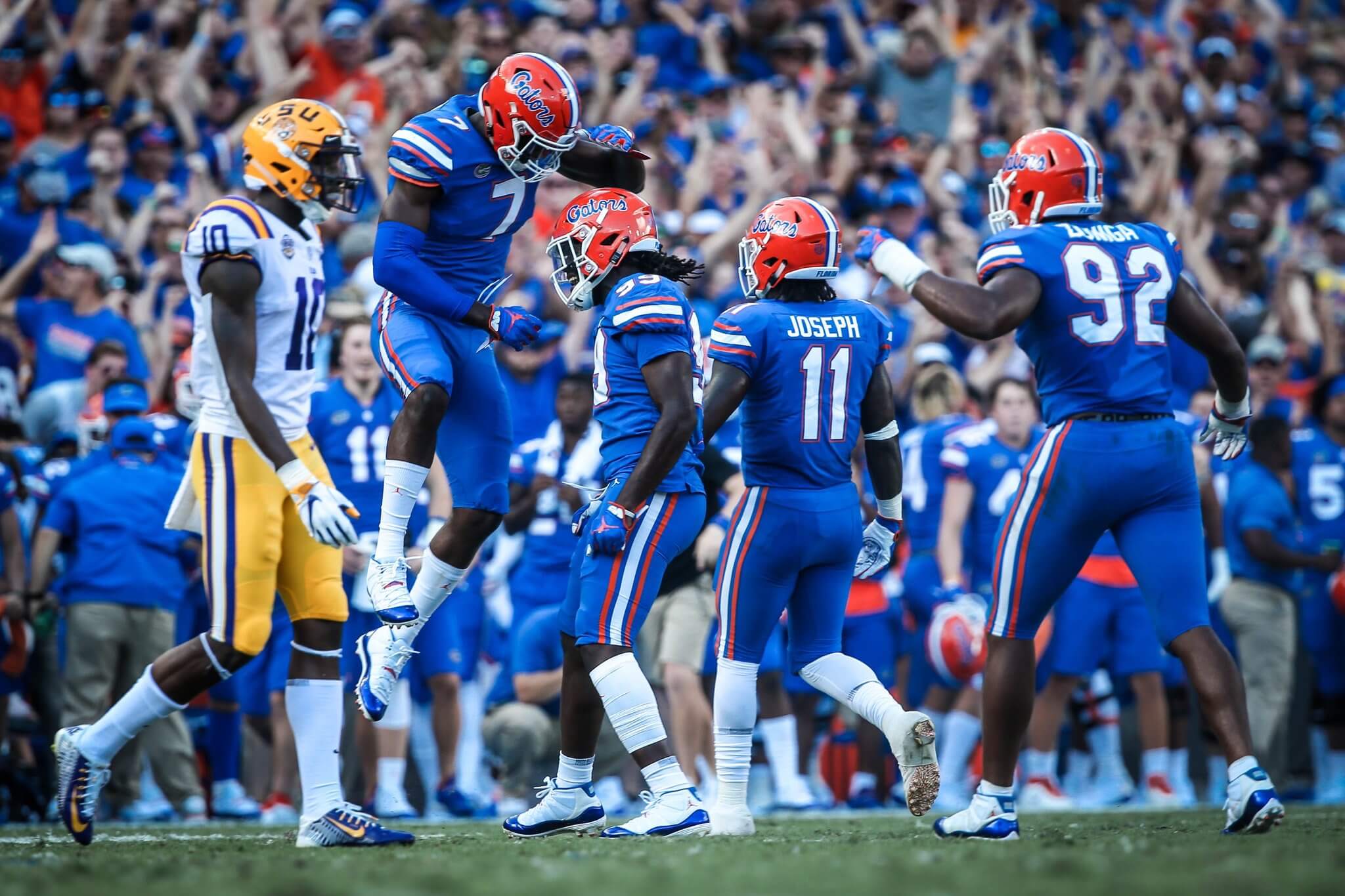 Yesterday, we went position by position and graded the Florida offense midway through the season. Today, we do the same with the defense:

Cece Jefferson has been fine, for the most part, but he’s been completely overshadowed by a pair of former three stars in Jabari Zuniga and Jachai Polite. Florida’s line has been stout both against the run and in pass rush, and has been the force that has driven the team so far. The issue with blocking these guys is simple: one man often can’t do it. If not for a subpar outing against Kentucky, this would be the easiest A there is to give.

Florida appears to have unearthed a gem in James Houston, but he’s going to have to wait his turn. Because with the return of David Reese, this unit has been absolutely fantastic. Reese and VoSean Joseph have each been one man wrecking crews on Todd Grantham’s two linebacker, 3-4 defense. And Chauncey Gardner-Johnson, once much maligned for his inability to tackle, has thrived in his new hybrid STAR role. Again, the ugly Kentucky game has dinged this unit’s grade a bit because that game happened and can’t be ignored, but since then, the middle level of the Gator defense has thrived.

Raise your hand if, right after the injury to Marco Wilson, you thought Florida would be even better off at CB than it was last year. CJ Henderson might be the best cover corner in America, and though young, true freshman Trey Dean III has grown tremendously since week one. These guys have seldom been beat in man coverage, and if Dean can tone down the aggression to the point where he doesn’t get flagged for silly interference penalties, a freshman All-America selection is a real possibility. Just wait until next year, when Marco is healthy…

The safety position has been a mixed bag. The last line of the defense’s defense has been responsible for some critical plays, such as Donovan Stiner’s game ending sack of Nick Fitzgerald and Brad Stewart’s pick six against LSU. And sometimes those “plays” are good for the other team, like losing Lynn Bowden for a 54 yard touchdown on third and fifteen and getting caught out of position while Nick Brossette roasted the defense on a 47 yard run. The sum of the effort from the safeties has been well above average. Now for consistency…

There’s not really much for Florida to improve on in the area typically listed third in the hierarchy of “offense, defense and special teams.” Officials be damned; freshman kicker Evan McPherson has not actually missed a field goal on twelve attempts. And while it’s too early to proclaim Tommy Townsend to be as good as his brother, he’s made that categorization look accurate so far. To boot, the Gators have finally returned the emphasis to scoring on special teams, both on blocked returned and on normal returns, doing so twice thus far.