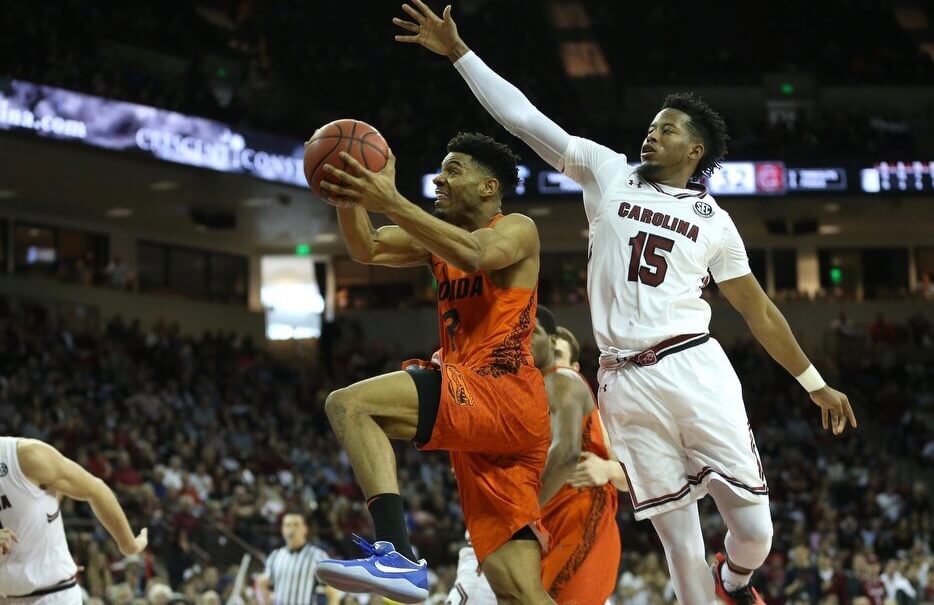 Evidently, the Gators are tired of hearing about their inability to rebound. And eleven months after they really needed one, the Gators finally got a win over Frank Martin’s South Carolina Gamecocks by doing just that.

The recent slide the Gators embarked on has spawned some debate about whether or not Mike White’s team would even be headed for the NCAA Tournament, which obviously would be a major disappointment for a team picked in the preseason top ten and coming off an Elite Eight appearance. But with today’s 65-41 frying of the Gamecocks in Columbia, one that puts the Gators at 17-8 on the season, including 8-4 in the SEC, and reversed a loss to the Gamecocks last month in Gainesville, that doesn’t seem to be a relevant discussion anymore.

It wasn’t that Florida did anything special to notch their seventh 14+ point victory over the Gamecocks in the last twelve meetings other than out rebound them by a nearly two to one ratio (46-24). Rather, it was because South Carolina was as far toward the “freezing” end of the shooting spectrum today as they were toward the “on fire” end of it the last time these teams met. Old Cocky shot an abysmal 27.8% from the field today, a stat that certainly had something to do with Florida playing tough defense but had much more to do with the law of averages working itself out. South Carolina hit 11 of the 21 three balls they attempted in round one in the O’Dome, which is so ridiculous that Florida almost deserved them to shoot below 30% the next time they played to even it out.

This game was never close, and never had the feel of a tense game. Florida exploded out to a 21-7 lead and then happily cruised from there, ballooning the lead to 58-32 with 10:38 remaining on a quick 5-0 run from Jalen Hudson that sent most of the Gamecock fans scrambling for the exits. It mattered not the least that Florida scored just seven points in the game’s final 10:38, as the Gators went into clock-killing mode and pulled the starters shortly after that point.

So just like that, Florida has gone from being on the NCAA Tournament bubble to being a real player for the SEC Championship again in the span of four days. The Gators will sit either one or two games behind first place Auburn after tonight pending their game against Georgia, with six games to go.

The Gators still have a ton of work to if they want to match their lofty preseason expectations, and their opponents aren’t likely to shoot as badly as South Carolina did tonight. But Florida did significantly improve on their rebounding from the first game against the Gamecocks, and that’s a striking new development after being owned on the glass on an almost nightly basis this year, even as recently as the LSU game on Wednesday. Throughout the year, the book on this Gator team has been “they can beat anybody when they shoot well, and they can lose to anybody when they don’t” with little gray area in between. But if today was a true indication that the Gators have finally figured out how to rebound without the services of John Egbunu and now an anomaly, the Gators may be closer to hitting their stride than we all thought.