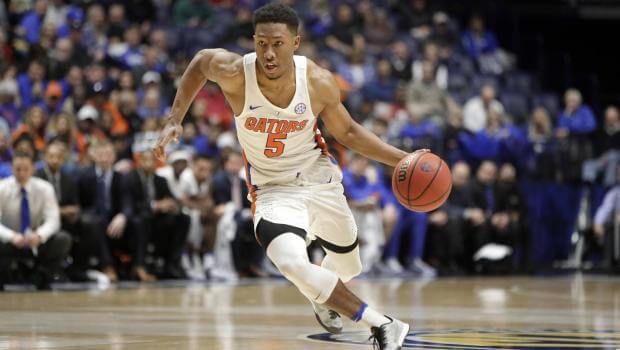 Somewhere out there are medals of valor waiting for all the true Georgia basketball fans who have waited since the dawn of the Mark Richt era to experience a win on the hardwood over the Gators in Gainesville.

Given the sixteen year wait, it was fitting that this elusive win in the O’Dome played out the way it did.

Yante Maten scored 23, the Gators got manhandled on the boards for the 8th time in 13 SEC games and Florida choked away a six point lead in the final 20 seconds to lose 72-69 in overtime to rival Georgia. The loss marks the first home defeat to the Bulldogs since the 2002 season- and that one didn’t count due to NCAA sanctions. To find out the last time Florida lost at home to Georgia and it counted, you have to go all the way back to January 17, 2000. It’s also the first time Georgia has swept Florida since the 1996-97 season.

Ask a Georgia fan. This one was worth the wait.

The Gators led throughout the overwhelming majority of the game, but simply couldn’t make enough plays down the stretch to put the Bulldogs away. Twice in the last six minutes, Derek Ogbeide got loose down low for some rim shaking dunks to keep the Dogs alive. Despite the Gators’ clear issues on both sides of the ball, the game seemed secure when Egor Koulechov knocked down a pair of free throws to put Florida up 59-53 with 25 seconds remaining.

Then came the collapse.

First, Florida either failed or opted not to defend the three point line on Georgia’s ensuing possession. That set the stage for the first of two Maten threes. Florida still had the ball up three with 16 seconds to go, but Jalen Hudson promptly took two steps with the ball and got called for traveling. You would think that Mike White and his players would remember that Maten had just buried a three on the previous possession. They didn’t and it happened again, this time to send the game that Florida had controlled throughout into overtime.

As if on a mission to make the overtime a microcosm of the entire season, Florida missed five of its first six free throws to begin the period. Georgia, meanwhile, made theirs, and thus led throughout the final five minutes. Only because Juwan Parker missed in the final seconds did Florida even have a shot to salvage the night, and that chance bounced harmlessly off the rim from the hand of Chris Chiozza.

The amazing thing was, the loss was a complete team effort last night. Many fans like to play the blame game after a loss like that, and this fan base appears to be pretty divided between pointing the finger at the players and at Mike White. Well, here’s a news bulletin: it’s on both. White can’t make free throws, handle the ball without traveling, rebound or score for the players. That’s on them. But the onus falls on White to either force his team to guard the three point line or foul with a three point lead in the waning seconds. Failure to do so, and the players will correctly assume that you don’t want them to- even though that was unquestionably the right basketball move at that time. And White’s failure to do so, coupled with his players’ various aforementioned failures, will make this loss sting for the next few days.

But this loss could sting for a lot longer than that. Incredibly, this Gator team is suddenly in serious danger of missing the NCAA Tournament.

Florida’s next opponent is a Vanderbilt program that sits at the bottom of the SEC, but that Mike White has coached himself to a win against once in six tries. Even still, the Gators should win that one.

And then the Gators’ final four games of the regular season are against the second best team in the SEC in Tennessee, the SEC leader in Auburn, an Alabama team that crushed Florida in Gainesville the first time they played and a Kentucky squad that’s struggling just as much as Florida but should be gunning for payback. It’s totally within the realm of reason to think Florida loses all four of those games, and if they do, there is a strong likelihood they’ll be in the NIT.

It isn’t quite time to hit the panic button yet. But it is time for this team to get better. And though they very well may by using this game as their learning point, if they don’t- and fast- they may go down in history as one of the most disappointing teams in school history.

One thought on “Gators choke late to suffer embarrassing, damaging loss to Georgia”