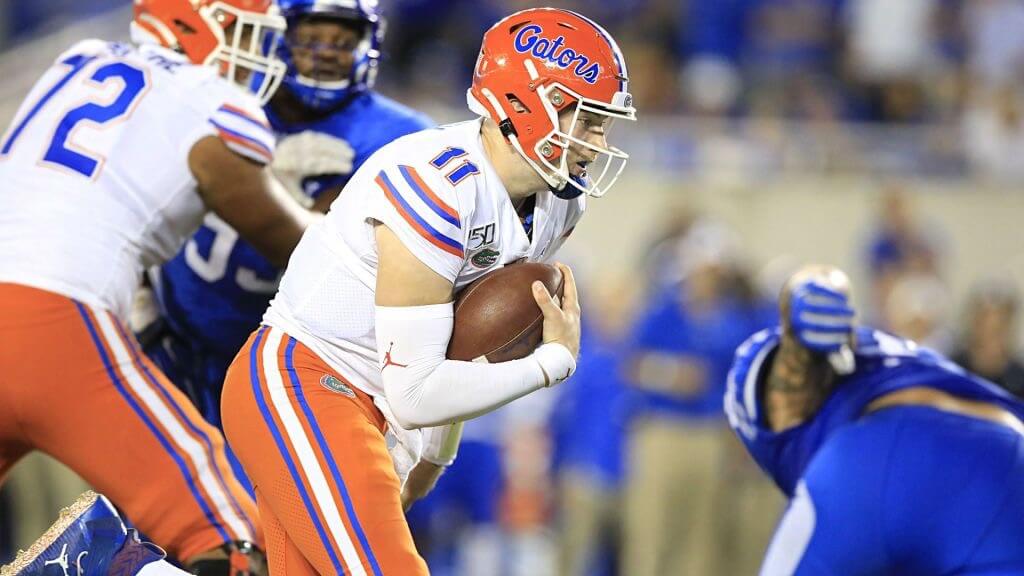 Kyle Trask was a backup at Manvel High School for four years, and a backup at the University of Florida for his first three. Now, though, he earned the right to upgrade his label to “Florida’s hero”.

And probably their new starting quarterback, too.

In a game that combined several elements from their last two meetings, Florida rallied to score 19 unanswered points in the fourth quarter to erase a 21-10 deficit and shock Kentucky, 29-21. The win serves as payback for Kentucky’s 27-16 upset in the Swamp last year- which snapped Florida’s 31 game winning streak in the series- and it means the Gators are still unbeaten against the Wildcats in Lexington since 1986. More importantly, the Gators are 1-0 in the SEC, which seemed unfathomable as late as the third quarter.

And it all came with Florida’s starting quarterback, Feleipe Franks in the locker room with a broken ankle that will likely end his season.

Florida actually scored first. After throwing an ugly interception into triple coverage, Franks got the ball back after Kentucky quarterback Sawyer Smith dropped the ball and Brad Stewart pounced on it. The Wildcats somehow left Freddie Swain alone- despite a surplus of film that suggested that this was not a good idea- and Franks found him with a bullet that allowed him to tumble into the checkered sapphire end zone for the touchdown.

But things immediately turned ugly after that- on both sides of the ball.

First came a 12 play, 79 yard touchdown drive for Kentucky that featured a converted 3rd and 21 and ended with a 26 yard touchdown pass from Smith to Ahmad Wagner. Marco Wilson was flagged for pass interference as he deflected the ball, but Wagner kept his concentration enough to haul it in to knot the game at seven. Moments later, Franks got strip sacked by Kentucky’s Jordan Wright, and Taj Dodson recovered for the Wildcats. A few minutes later, Smith did it himself on a quarterback sneak to give Kentucky a 14-10 lead. For a finale to that nauseating second quarter, the usually reliable Evan McPherson missed his first field goal since last year against South Carolina.

Florida’s defense appeared dead and on its way to the burial site when Smith killed a promising Kentucky drive right out of the gates in the third quarter with an ill advised pick to Shawn Davis in the red zone. 72 yards the other way later, Florida was set up in the suburbs of Kentucky’s red zone and looked like they could tie it up. The Gators blew that chance with a killer offensive pass interference call that forced a field goal attempt, which McPherson made, but that ten point swing kept them alive.

Because Kentucky then went flying right down the field again, this time scoring on a 13 yard toss to Keaton Upshaw. That made the score 21-10 Wildcats late in the third- just as it was last year. And it objectively felt like the Gators were headed for a second straight loss to the school that they had beaten 31 straight times before last year.

But then the game took a bizarre, cruel, unforeseen and unforgettable turn.

Florida’s ensuing drive stalled and, sensing just how dire of a situation he was in, Dan Mullen went for it on fourth and one at the Kentucky 38. Franks dropped back, saw nothing, and tried to tuck it and run. He was not only stopped short, but his body was twisted around in a position that… we’ll just say did not look comfortable. It turned out that his ankle was dislocated, and that meant the ball went over to Kyle Trask on the Gators’ next possession.

Which came sooner than most people probably thought, because Florida’s defense- which had been bullied for most of the night, especially in the trenches- rallied and forced its first three and out of the game. Trask calmly trotted onto the field and began throwing darts, completing his first four passes of the game to put Florida at the doorstep of the goal line. After his first incompletion, he appeared to take off on the option run before flipping the ball to teammate LaMical Perine, who jogged in untouched. The two point conversion attempt failed, but now Florida had drawn within 21-16- which further continued the eerie resemblance of the 2018 game’s scoring pattern.

Then Florida switched tracks, and began to mimic the sequence from the 2017 game against Kentucky. Whereas last year the Gators couldn’t finish the job, this year they did.

A few plays later, Davis recorded his second pick of the game by coming down with an ill-advised floating balloon from Smith near midfield. Following a targeting call that undid a sack, Trask found Kyle Pitts for a 30 yard gain. Two plays later, Trask barreled in for the score and the lead with four minutes to go. A second failed two point conversion left the score at 22-21, though, and just as in 2017, Kentucky drove down the field and set up a go ahead field goal with under a minute to play. Luckily, the re-enactment of the ending of the 2017 game ended the same way, as Chance Poore’s 35 yard field goal sailed wide right.

This time, though, the story had an epilogue.

After Kentucky had burned two of its three timeouts, Josh Hammond took a jet sweep 76 yards for the score with :33 showing on the clock. The extra point made it 29-21, but also left Kentucky with a last call to tie it up. Thankfully, Kaiir Elam put an end to that idea by intercepting Smith’s desperation heave as time ran out- nearly four full hours after the opening kickoff.

This was one of the most emotionally draining and program altering games I can remember, truth be told. Even without the gruesome injury to Franks, this contest featured enough plot twists to be its own Hollywood production; throw that injury on top of the pile and you have a game that completely reshaped the outlook of the Gators’ entire 2019 season and possibly beyond. What happens with the Gators’ QB position is unknown, and therefore so is the effect that it will have on Franks and the 2020 season.

But we’ll have the breathing breaks throughout this season, and possibly an entire offseason, to mull that over. For now, we have to focus on what we do have.

What we do have is a team that will be led by either Kyle Trask or Emory Jones for the duration of the season, and possibly by a combination of both.

What we do have is a team that looked really, really bad for major chunks of the game- and that will need to be addressed- but that found a way to win, and in doing so, score some sweet payback against a team that stunned them in Gainesville last year.

And what we do have is a team that’s won its SEC opener, and sits at 3-0 for the first time in three years.