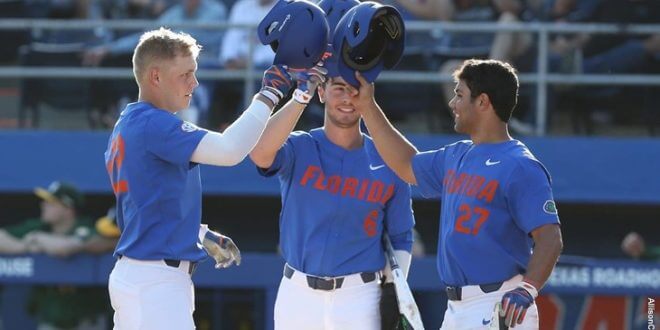 Allow me to begin by issuing the standard warning that nothing is guaranteed in college baseball. Even in a double elimination format, things have a funny way of working sometimes that doesn’t go the favored team’s way. Upsets happen. Cinderellas rise. Favorites go down when least expected to. And that’s not just indicating these things are possible, but rather par for the course in the NCAA Baseball (or really, insert sport here) Tournament.

Having said all of that, Florida could not possibly have gotten a more favorable path back to the College World Series.

Let’s start with the Gainesville Regional. The four team pod consists of host Florida, Jacksonville as the #2 seed, Florida Atlantic as the #3 seed and Ivy League winner Columbia as the #4 seed.

Scouting report: The Gators will start against Columbia as the Regional 1-4 matchup. Not only does Columbia possess by far the worst record in the 64 team tournament field at eight games below .500, they own that record despite winning five of seven series in the Ivy League, and are one of only two teams to make the tournament with a losing record. When doing the research for this piece, I didn’t expect to see the Lions particularly high in most statistical categories, but it became a game of “Where’s Columbia?” Oh, there they are: way, way down there at 210th in slugging percentage (3.69), 211th in on base percentage (.348) and 233rd in the nation in ERA (5.81). Those numbers figure to take a beating in their respective negative directions against Florida.

Key fact: It’s not like the Lions faced a gauntlet of a schedule, although they did face USF four times. They won one of those games, 4-3. The other three? Embarrassing losses by margins of 13-1, 8-0 and 13-6. For perspective, Florida beat USF with its sixth best pitcher (Tyler Dyson) in a midweek game.

Projection: Simply put, this is the worst team in the NCAA Tournament. And that’s what Florida deserves for its inaugural game as the #1 overall seed. Whoever Kevin O’Sullivan deems to be the weakest of his three starting pitchers for the NCAA Tournament should definitely be used here.

Scouting report: One of Florida’s two possible opponents in its second game is FAU, a team Florida routed 6-1 back in February. The Owls have found their footing since then, though, at least enough to reel off 40 wins for the season. Though they won’t blow you away with their power, this team has some hitters to watch out for, led by Jared DeSantolo (.323) and David Miranda (.321). As a team, the Owls sport a respectable (though definitely not frightening) .364 on base percentage. Their pitching might let them down, though: FAU’s team ERA sits at 4.13. That won’t translate well against the Gators.

Key fact: The Owls actually have solid pitching numbers among their starters, but are badly hurting for depth. They’d better hope whichever starter they use against Florida (my guess is Vince Coletti) can go seven or eight innings, because they have virtually no chance against Florida if they have to use their bullpen before the seventh inning.

Projection: Florida drew a fairly dangerous Bethune Cookman team as its Regional #3 seed last year. This FAU team is better than Bethune Cookman was, and that’s worth noting because BCU took a game off Florida, but if Florida pitchers can navigate through the top of the Owls’ lineup without catastrophe, the Gators will be fine.

Scouting report: While not smart to dismiss Jacksonville solely because of the conference they play in, Florida could have done a lot worse than this as a Regional #2 seed. The Gators could have drawn any number of somewhat local teams that finished ranked in the Top 25, like Duke, Southern Miss, Louisville or Houston, as the Selection Committee insists it crafts the Regionals solely based on geography and doesn’t take team resumes into account until pairing the Super Regionals (which is new for this year). Before you lay down money on Florida to advance, though, consider that Jacksonville boasts a team ERA of 3.88 and an on base percentage of 3.86- both within the top 60 in the nation. And with three starters with batting averages north of .325 (Scott Dubrule, Chris Lahane and Angel Camacho), the Dolphins can’t be completely written off.

Key fact: The Dolphins are 2-8 against Top 25 RPI opponents, and predictably, their numbers take a dive in those contests. Or spike, in instances where higher numbers aren’t good. One of those two wins came against Florida, but that was in a midweek game. Point is, those numbers are inflated due to a pretty easy schedule.

Projection: Florida split a pair of games against these Dolphins with its fourth and fifth best pitchers getting the starts. Given that the Dolphins are the best team in their Regional, Sully figures to throw Brady Singer or Jackson Kowar- or both, should they face them twice in this double elimination format- against them this weekend. Let’s insert the standard warning one last time here that anything can happen, but when you look around the country and see who else was relegated to a #2 Regional seed, Florida got a gift here.

I can’t bring myself to look too far down the road, because I remember what happened in the 2014 Gainesville Regional and thus will never be caught daydreaming about potential postseason matchups more than a week away. But as the #1 overall seed, Florida did draw a favorable Super Regional pairing with #16 NC State, Auburn, Northeastern and Army. I’ll preview the Super Regional opponent in more detail once we know who it is and once we know the Gators did not fall victim to some truly stunning upset in its own Regional, but like with its Regional, Florida appears to have gotten as pretty a path through that round as possible.

Now comes the part that the 2014 postseason, and the last few weeks, proved is no sure bet. Time to go out and validate the relatively weak Regional by winning it, and take the first major step toward a national championship repeat.