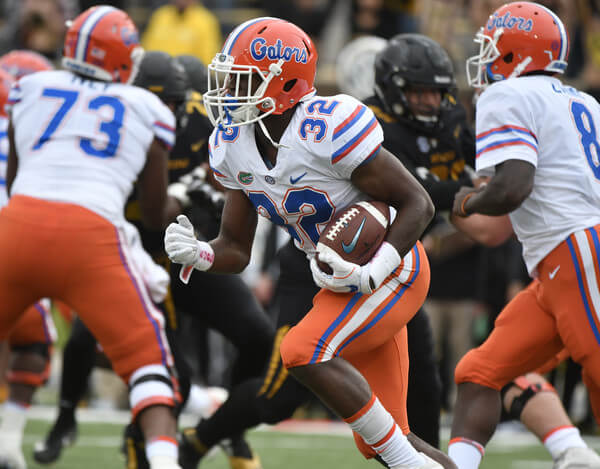 An ugly situation for a former Florida running back just got a whole lot uglier.

Nineteen days after Adarius Lemons announced his decision to transfer from the Gators’ program- minutes after the Gators lost to Kentucky- Lemons has found himself in jail due to a domestic battery complaint. He faces two counts of battery and a third count of damaged property. And the details provided by a pair of witnesses are terrifying.

Late last Friday night, Lemons and his girlfriend of about eight years, Ronisha McLeod, got into a verbal altercation at McLeod’s apartment that turned physical. Lemons wasn’t happy with something McLeod posted on social media, and he responded by smashing her new iPhone and causing it to shatter into three pieces. Lemons then attacked her, choking the woman to the point where she couldn’t breathe and slamming her back against a bed. McLeod’s left foot hit a railing and one of her toenails was ripped clean off her body.

But according to the report, Lemons still wasn’t done. The assault continued when he then dragged McLeod out into a hallway and slammed her against the wall and continued to strangle her so hard that she had to stand on her bloodied toes just to try to breathe. At some point, Lemons apparently saw that he was causing the woman serious pain and then released her.

Here’s a full look at the charges he’s facing:

There were two separate witnesses inside the apartment complex who reported seeing the ugly incident. Both were taking showers when they heard screams in the hallway. Their attempts to separate the two were unsuccessful.

McLeod identified Lemons to the police. Lemons is currently sitting in the Alachua County Jail on $65,000 nail.

While this development in Lemons’ story is stunning, this isn’t exactly the first time he’s done something eye-raising. Lemons’ announcement of his decision to transfer came after he pitched a fit in the locker room after the loss to Kentucky, and keep in mind that wasn’t even the first time he declared that he was finished as a Gator on the day of a game that he played in. He also stated less than two hours before kickoff against Vanderbilt last year that “this is my last game.”

I always try to wish former Gators the best as they seek new opportunities. But not this time. Even before he violently beat up his girlfriend, Lemons has sealed his reputation as a petulant child and a problem in the locker room. Throw in this domestic battery and it’s clear that he has no place on Florida’s roster, or any roster for that matter aside from a police lineup. To physically attack and cause pain or injury to someone who you supposedly love and care for- and really, you could argue that strangling someone is an attempt to kill that person- is among the worst things you can do. I have zero tolerance for those who commit violent acts like the one he committed against McLeod for any reason other than defending yourself or a loved one from serious bodily injury. No well wishes for you, Adarius. I’m glad you’re gone.

Because that means that the Gators are one step closer to building a respectable program both on and off the field.