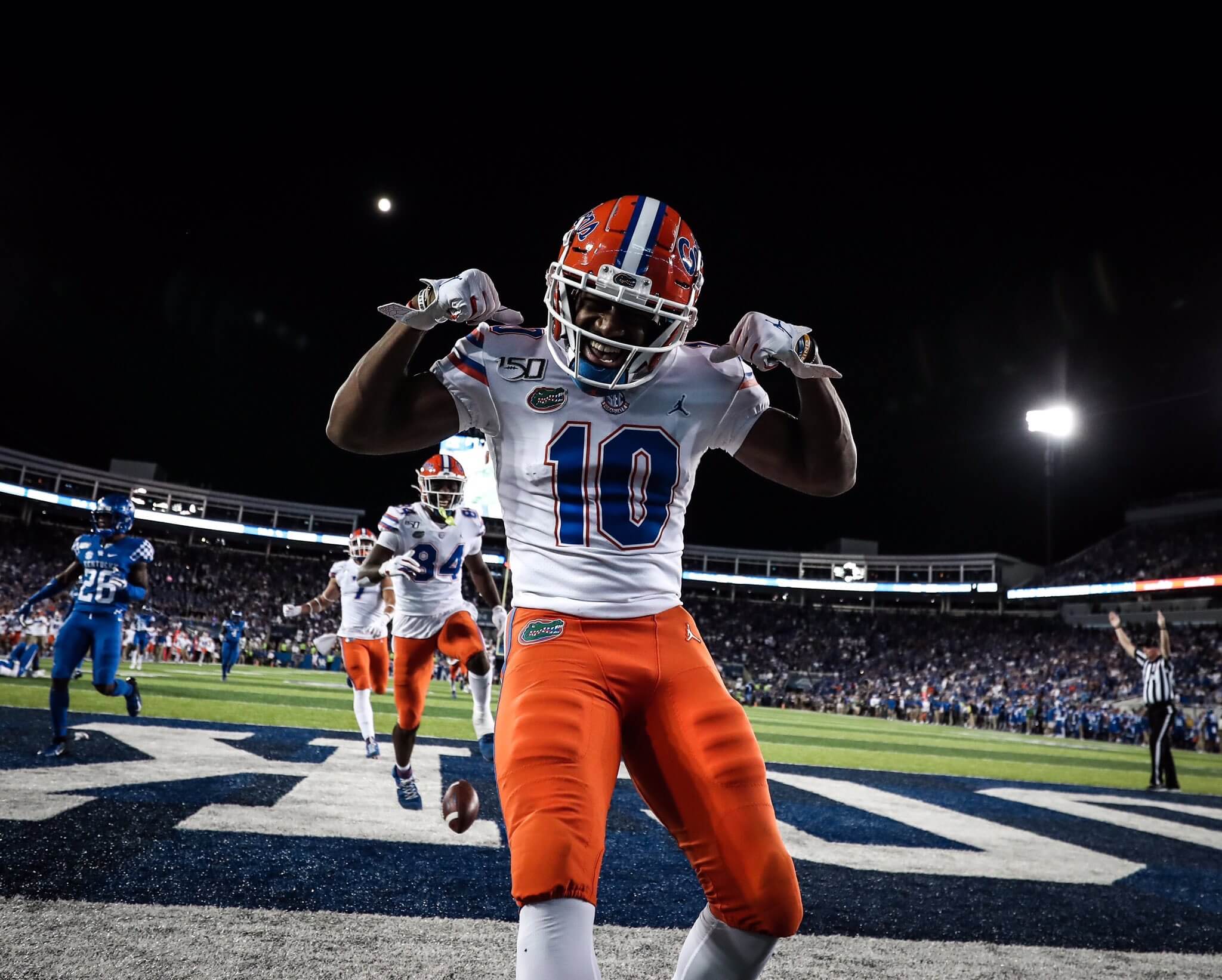 Quick FYI before I begin this film review, I will be trying to use more images and less GIFs, as the GIFs slow browsers down. I also will not be focusing on Franks as much as I normally would, with him being out for the season I feel it’s a waste of my time to excessively focus on someone who won’t be taking snaps for Florida again this year.

I’m going to focus a lot on OL play in this review. As I’m happy to admit, some of this is guesswork because I don’t know the actual play call, but in my experience watching film and watching far more experienced pro scouts on Twitter break film down, you don’t hold a double team block on linemen for the entirety of the play. One of the linemen is supposed to disengage from his block and head up to the next level. That doesn’t happen.

In the GIF, watch the double team that opens a seam for Perine. 66, Nick Buchanon should release and head up to attack the safety.

This is what I believe should happen, at least. Buchanon sticking to a double team block and not releasing up leads to the safety crashing down and making a play on Perine.

We’ll skip over the GIF here on Franks’ first interception, but this is one of those plays where it seems like Trask might be an upgrade over Franks. Franks has an issue with holding onto the ball for too long and hoping to turn nothing into something as he doesn’t seem very intent on throwing the ball away. He floats the ball up into an area with multiple defenders… and, well, I’m not going to beat a dead horse, so let’s just say you can’t be surprised by the end result.

The small things matter when your offensive line is, quite frankly, poor at run blocking. We’ve got a linemen stepping on the foot of another linemen, tripping him, slowing him down and Perine ends up running into the tripping linemen which completely slows his momentum down and ends up resulting in a short gain as Perine is dancing around hoping something happens. 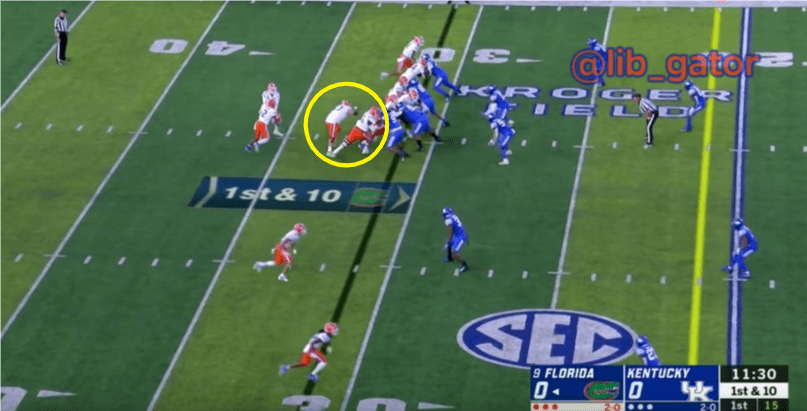 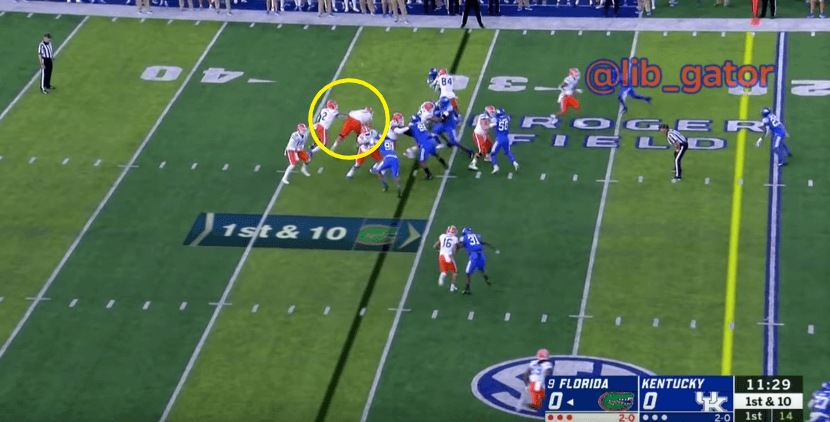 And sometimes it just doesn’t matter if guys do their job. Here we see no blown assignments, body on a body but Buchanon doesn’t hold onto his block of the linebacker for more than a second and #17 is able to disengage and close off the only seam that existed for Perine to run through. 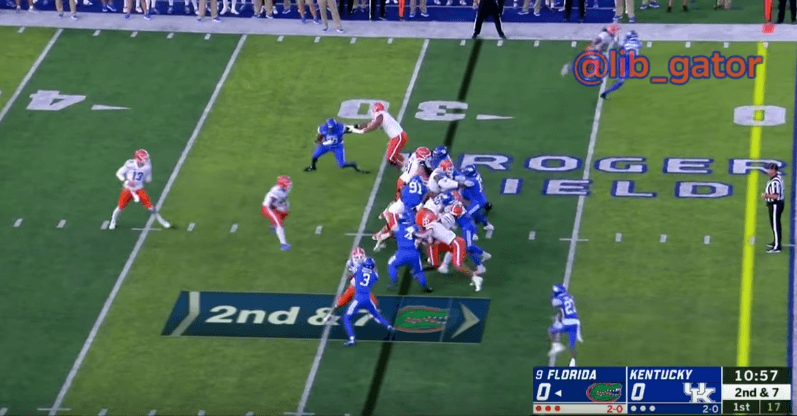 I have ranted quite a lot on Twitter about how muscles mean nothing if you can’t translate the strength to the football field, and Florida- and this may or may not surprise you- is physically soft at quite a lot of areas on the football team. Primarily, the offensive line, as Florida gets pushed around by teams you may deem as less talented than Florida. Heggie would redeem himself for this later (spoiler alert), but here he gets manhandled and his blown block allows a defender into the backfield. Forsythe doesn’t seem to have a clue on who he wants to block, I have no idea if Buchanon made the proper block, and I’ll circle I’m talking about below. But more than anything? I am ready for these toss plays to be burned out of the playbook until this offensive line proves they can just simply line up and cleanly block a HB dive. The pulling and tossing plays go absolutely no where more often than not.

Again, this is the negative of not knowing a play call and the blocking  scheme, but Buchanon, circled yellow, allowed the red blitzing linebacker past him without putting up a fight and attacks the linebacker that is waiting and reading the play.

Here, in red we have Heggie who gets man handled by the DT, in the pink we have a double team by the tight ends that  has failed to do it’s job, he gets in on the tackle, and in yellow we have Forsyth who is trying to make a late block on the blitzing linebacker I pointed out above. 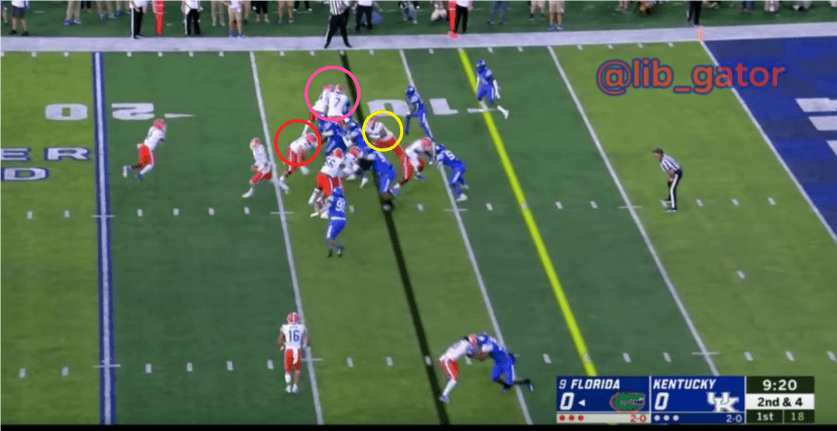 This play is probably a TD if Pitts blocks it correctly. Our tight ends are a major problem in run blocking. Yellow is what is supposed to happen, and I’m 90% confident on this regardless of whether I know the play call. 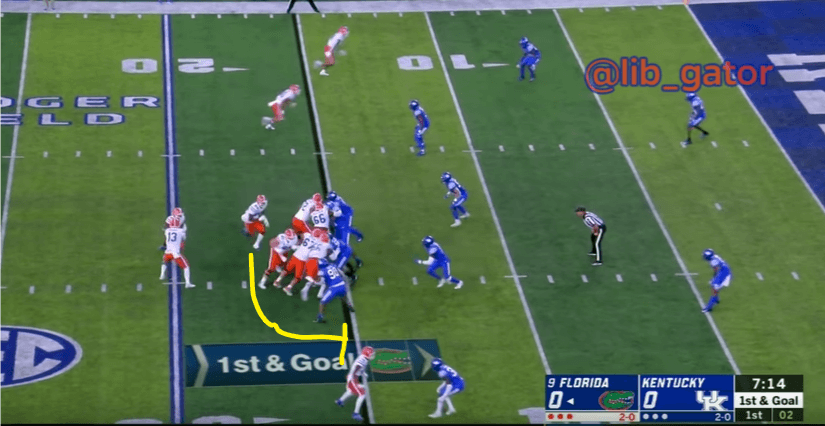 What I diagrammed above is not what happens though, Pitts cuts his block short, double teams a linemen who doesn’t need double teaming and the defender he should have blocked to spring Perine comes up and makes the tackle. 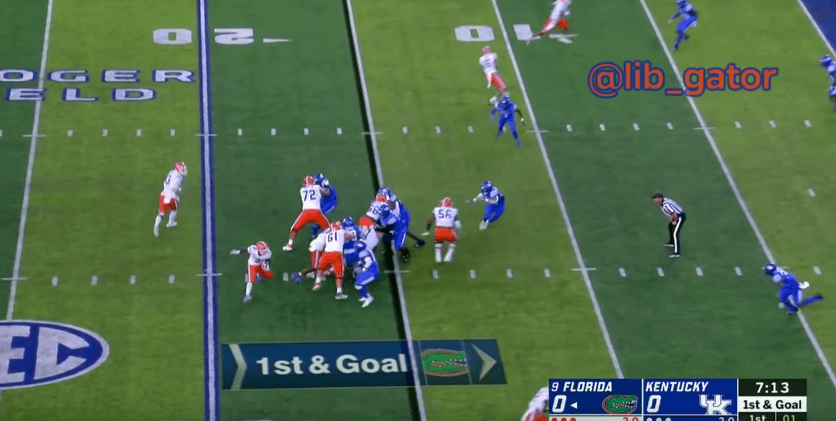 Florida’s pass rush was non-existent vs Kentucky… except for here, where Kentucky decided to not block Jonathan Greenard. But this was the lone sack of the day, a blown assignment that allowed Greenard in untouched. Nothing worthy of bragging about.

One season and a quarter of a second season into his tenure, and I have to say: Defensive Coordinator Todd Grantham really knows how to get on my nerves. He loves to bring pressure in spots other DCs would not bring pressure, such as going cover 0 on the road against Mississippi State on 4th and game. But this is the infuriating part of him being your DC, he calls a soft zone, three man rush, against a backup QB who is taking the snap 2 yards from his own endzone, why is he not bringing pressure here? This was a 3rd and 21 completion because Grantham can’t figure out exactly how much or how little confidence he has in his defense. 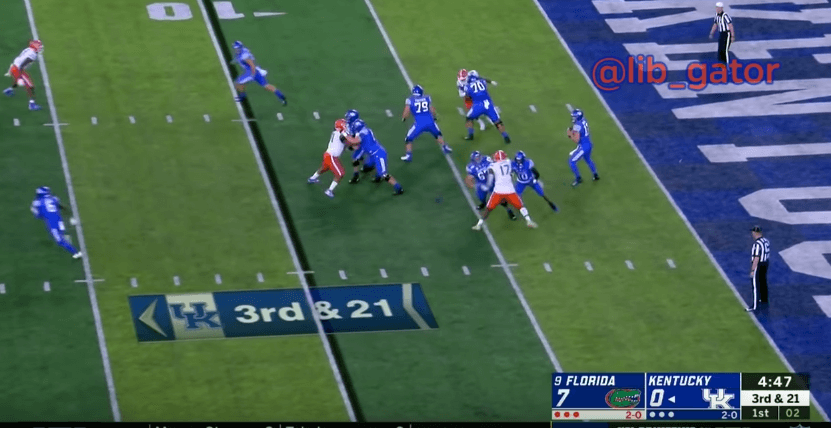 Here is a quick highlight of more of my love/hate relationship with Grantham. Here is a 3rd and long where he does bring pressure, but he asks Reese, who is quite poor in pass coverage, to drop from the line of scrimmage where he is showing pressure, all the way back 10 yards and to the sideline to cover a WR. I have no issue bringing heat from the corner spot, but let’s leave Reese having to drop into coverage like this to someone better suited for it, like Burney or Miller.

Reese was all over the place against Kentucky and he made a lot of tackles at the line of scrimmage, which is a sign of great linebacker play. I went into this game expecting to note a lot of tackles 8 yards down field, but that wasn’t the case; it’s plays like this that stick out the most.

I’m not here to complain about whether this was a catch or not, Marco Wilson has not been himself so far this year, but I have no issue with the coverage on this play. He is glued to the WR, he goes to play the ball, this is borderline perfect coverage that the WR just makes a great play on.

Again, not sure how you can be mad at this coverage. 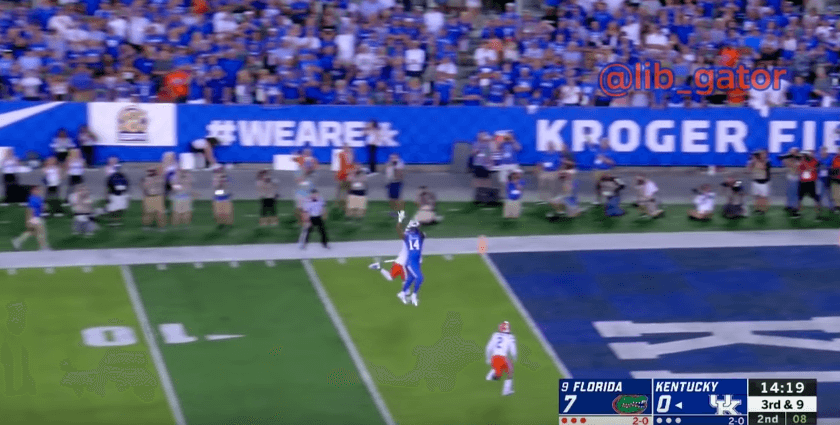 Franks has always had an issue with just understanding when to take a sack, it should be painfully obvious that he’s fighting a losing battle here but he still tries to get the pass off. True, he didn’t miss the block that led him to get blindsided, but the good quarterbacks are able to feel pressure, and…. (voice trails off.) But I’m not focusing on that here, I focus on the OL.

I’m guessing that the pull plays won’t go away anytime soon, so it’s something I’m going to have to get used to watching on a weekly basis as this line fails to grasp how to pull block effectively. Bleich pulls in order to give the defense the look of Franks keeping on a QB, it’s meant to get the secondary to bite on the run action. But Bleich completely whiffs on the block. Delance continues to show why I’m hesitant about his future at RT. He shuffles inside at the snap, then tries to get back in his stance, he fails badly and ends up doing what he does a lot, reaching to save the block. There has not been one game so far this season in which Delance has played well overall, and it makes me wonder if his backup is really that bad that we continue to get no sign of Delance losing his job for this kind of play on a game to game basis.

When I said a week ago that I wasn’t concerned about replacing Toney, this is one of the examples I was talking about. This is a play where Toney very likely catches the ball and dances around trying to make something happen when the blocking is fine. Simple catch and go, nothing complicated, but just expanding on something I stated a week ago. Freddie Swain doesn’t do anything crazy and makes something happen.

If I asked you who you thought Delance, circled, would block, the man with the yellow tick or the man with the red tick, who would you guess? This isn’t a delayed blitz, right at the snap both are coming. 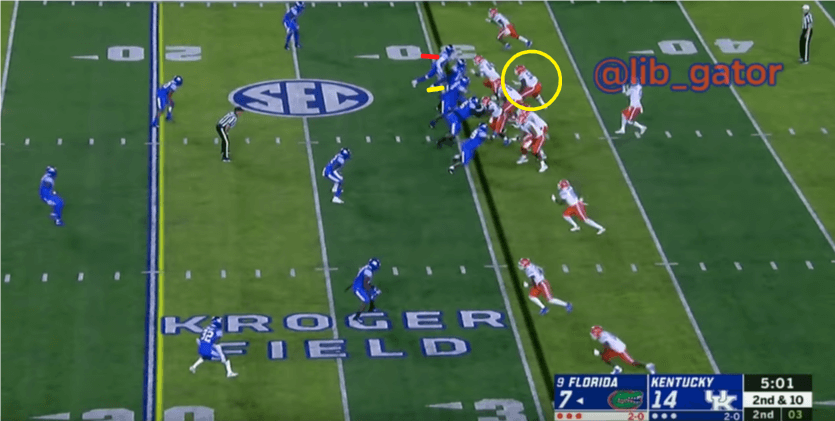 Answer: He picks up the man with the yellow tick, allowing a free rusher to come in. 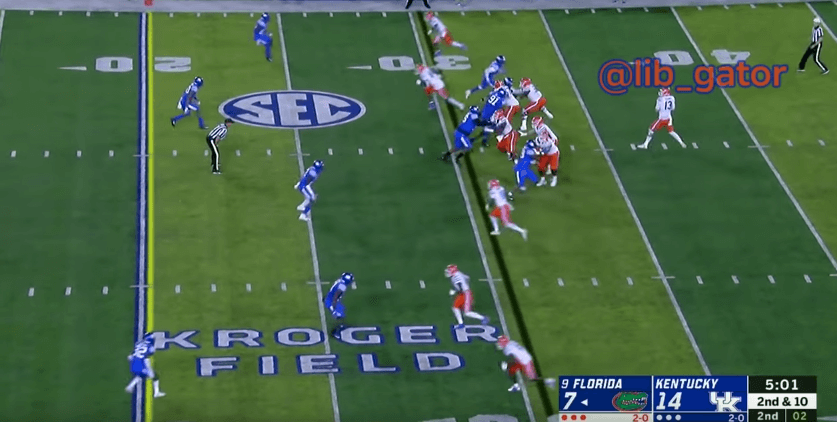 And as we see so often with Delance at the RT spot, he tries to save himself too late, twisting and reaching for a block he no longer can make cleanly. 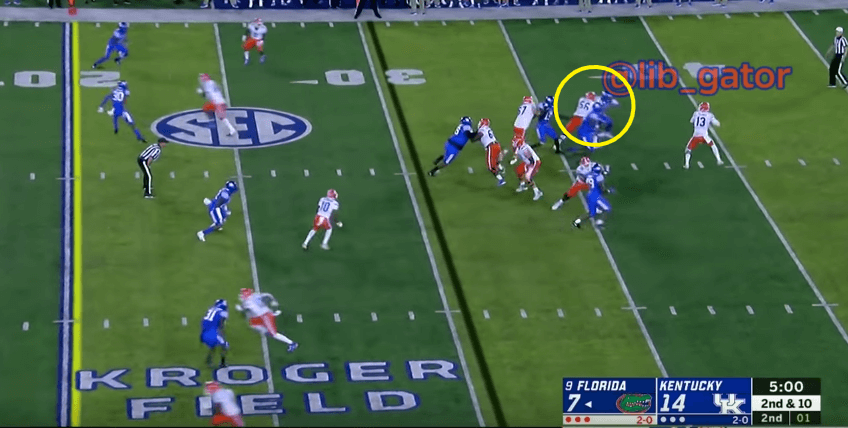 This staff likes to call plays out of this bunch formation with WRs taking on stronger defenders in the run game and I can’t really think of an instance this season where the play call actually worked. This is arguably the best blocked run from the 5 linemen on the team, and there is a clear seam for the RB to hit, but Jacob Copeland is asked to defend a 240 pound linebacker who quite easily gets inside leverage and is able to make a play on Perine. That’s not fair.

Here is Copeland’s attempt at a block, and here is the seam I spot. 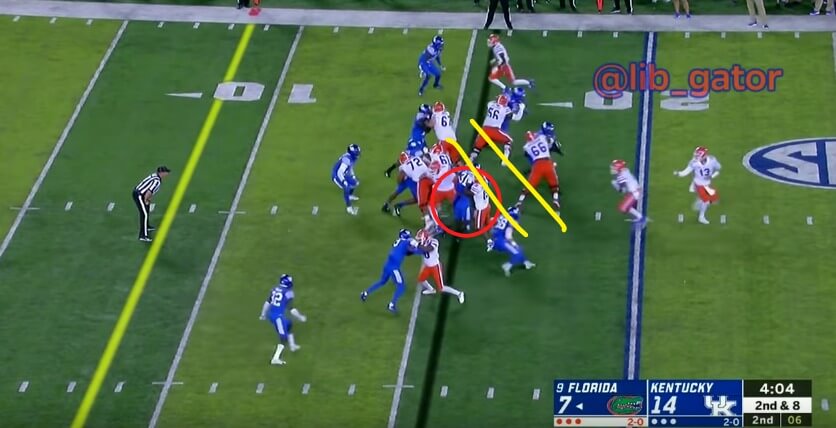 Another look slightly further into the play. Everyone else has a body on a body and looks to have a clean block engaged. There is no defender past the wall of Florida players. Copeland’s lack of a block killed this play, and Florida went onto miss a field goal on on this drive play. 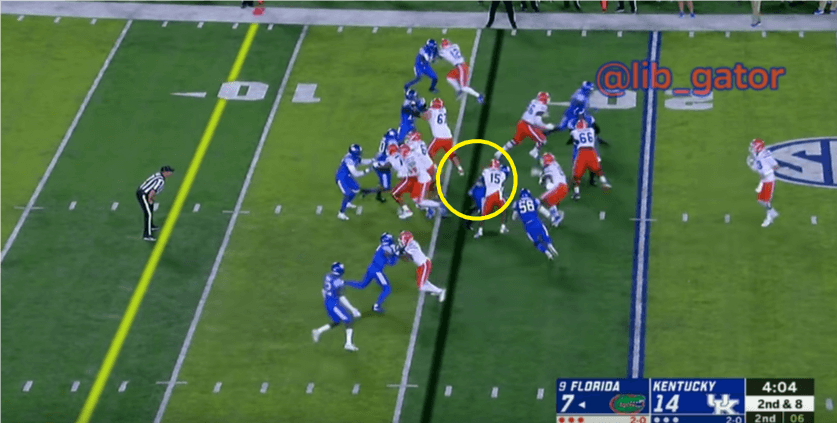 I haven’t focused too much on defense in the first half, as Kentucky’s offensive line has just dominated Florida for the most part. And Grantham had called a really bland gameplan that has mostly only relied on the defensive line for pressure. But when Grantham brings pressure it tends to result in a play like this. So even if it isn’t a sack, an incomplete pass is just as important an end result.

That’s it for the first half. The second half thread will be longer as I focus on the defense and Trask.

One thought on “Florida vs Kentucky: Film Review – First Half”