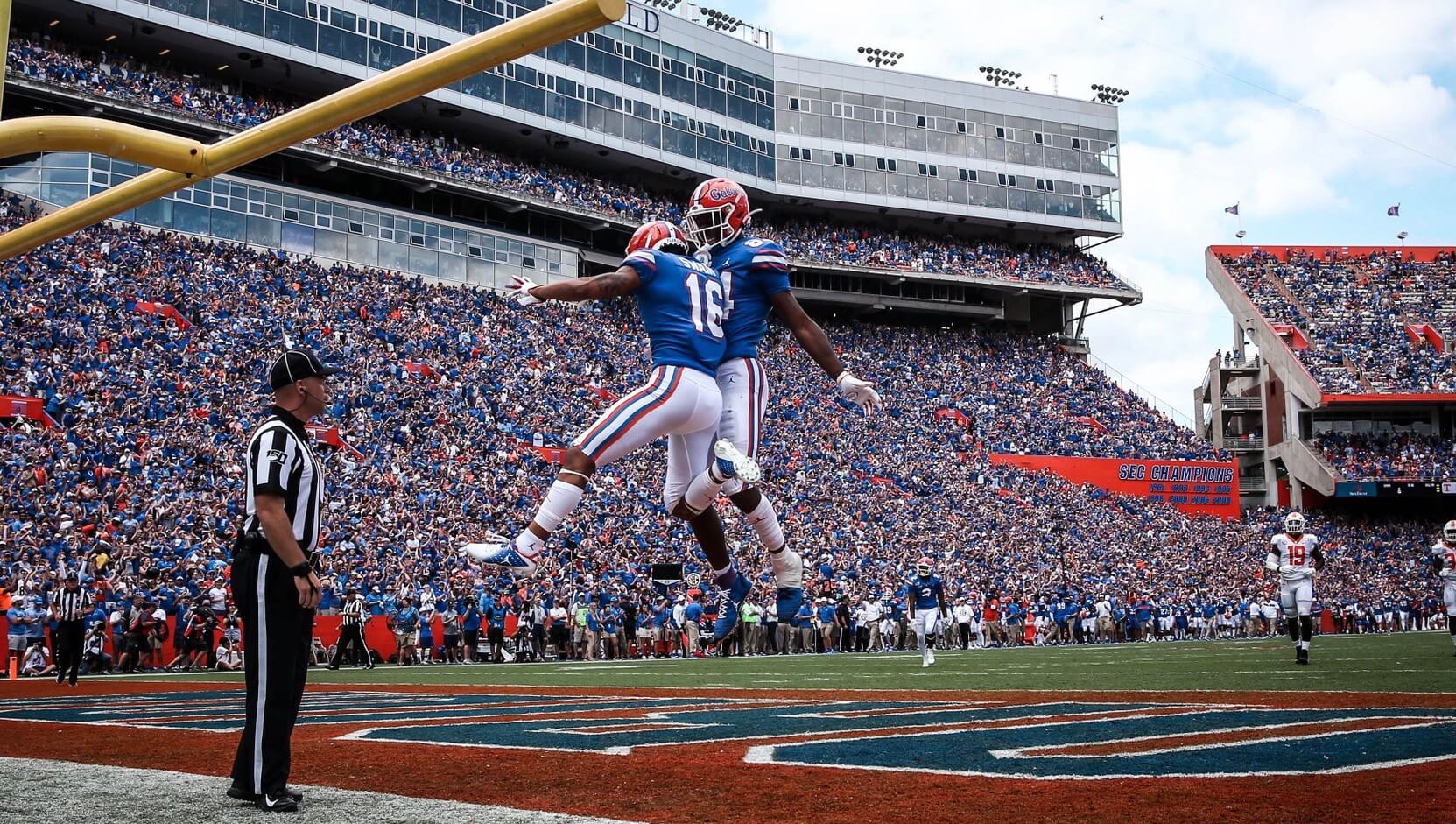 Time for what’s becoming my favorite part of each week: handing out helmet stickers and a game ball to the Gators’ MVP!

So, who earned the honors this week in Florida’s 34-3 win over Tennessee? Spoiler alert: a lot of guys did.

-Kyle Trask and Kyle Pitts, each, for their 19 yard touchdown hookup barely two minutes into the game. Tennessee never really figured out how to defend the middle of the field against Florida, and credit the two Kyles for taking advantage of that. Easy pitch and catch from the new quarterback to his tight end, and then a nice job by Pitts at the end to muscle his way into the Gator orange paint. Give an assist to strength and conditioning coach Nick Savage, too.

-Jonathan Greenard, for his touchdown saving PBU midway through the first quarter. It’s half because of Greenard that Tennessee never did find the end zone. On a second and goal from the Florida 3, tight end Austin Pope ran a simple out pattern and was wide open for the score. But Greenard got both hands up and Dikembe Mutombo’ed the pass down, adding insult to injury with Mutombo’s famous finger wag at the end.

-Trey Dean, for his diving interception in the end zone on the very next play. The other half of the reason why Tennessee never scored a touchdown is because of their own hero, Jauan Jennings, and Dean for taking advantage of the situation. Jarrett Guarantano had Jennings for a touchdown, but Jennings- whose career definitely peaked three years ago while taking advantage of a Gator cornerback who had fallen down- simply couldn’t catch it, instead deflecting it and popping it up just enough that Dean could snatch it on the dive. And thus, Tennessee scored zero points off of a turnover that gave them the ball inside the red zone.

-Marco Wilson, for his first interception as a Gator early in the second quarter. At long last, Wilson has a tally mark in the most coveted statistic for a defensive back. No, he has not looked the way we all thought he’d look this year, but nonetheless, the return from an ACL tear features months of grueling work that nobody sees. And though he didn’t even look too great on the interception- the ball was thrown right to him on a QB-WR mixup, and he bobbled it and have to dive just to save it- an interception is an interception. Which Wilson now has to his name forever.

-Luke Ancrum, for his sack of Guarantano midway through the second quarter. Tennessee’s offensive line may not be great, but Ancrum nonetheless deserves credit for the nasty move he put on right guard Riley Locklear, placing his foot into the ground and juking out Locklear to get into the backfield. Meanwhile, Guarantano sensed the pocket collapsing and stepped up- right into Ancrum’s waiting hands.

-Jonathan Greenard X2 for his second PBU of the day midway through the second quarter. This one didn’t save a touchdown, but still. The nose for the football that Greenard has is absolutely uncanny, and on this particular play he flew unimpeded into the backfield and batted the pass down as easily as answering the phone.

-Kyle Trask and Freddie Swain, each, for their 29 yard touchdown connection midway through the third quarter. This one was easy for both parties to execute, but it was, for all intents and purposes, the dagger. Again, Tennessee never did cover the middle of the field against Florida, and so when Swain beat his corner on a simple post route against a zero high safety defense, that was all she wrote.

-Jeremiah Moon, for his PBU midway through the third quarter. Tennessee had a decent looking screen set up for Marquez Callaway, but Moon put an end to that idea by streaming through the line and batting the pass down. Had the play worked, Tennessee might have actually mounted a threat, as there was a lot of room down the left sideline.

-Marco Wilson X2 and Amari Burney, each, for Burney’s interception on the very next play. Burney gets credit for this pick in the stat book, but Wilson gets an assist in my book. On a third and ten, freshman quarterback Brian Maurer rolled left and fired in the direction of tight end Dominick Wood-Anderson. The ball never got there. Wilson stuck a hand in and poked the ball skyward, giving it enough air underneath it that Burney could dive and pick it out of the air.

-Amari Burney X2, for his TFL midway through the third quarter. Florida had missed a bunch of tackles on the day and Tennessee had just gained one of twelve first downs it would get when Amari Burney said the hell with this. The young linebacker flew in past the right side of the line and spun Eric Gray down for a one yard loss to further assert his dominance.

-Dameon Pierce, for his punishing 12 yard run early in the fourth quarter. Sure, it came against a battered and bruised defense, but you always like to see a running back be able to batter and bruise a defense no matter how battered and bruised it already is. And besides, it wasn’t like Florida’s running game had done much before this point anyway. So a helmet sticker goes to Pierce for running through several Vol defenders on this run and proving that there is indeed some hope for this ground game.

-Dameon Pierce X2, for his 10 yard touchdown run two plays later. The Gators’ running game will definitely need some work over these next two weeks, but Pierce certainly gives Florida some hope. There was no hesitation, no dancing, no second guessing; Pierce saw the hole through the B gap and exploded through it, high stepping the last few feet into the end zone to turn the scoreboard from a convincing Florida lead into a downright laugher.

And the game ball goes to… Brett Heggie. Helmet stickers are for specific plays that stood out, but I like to reward somebody for consistency throughout the course of an entire game, and Heggie definitely fits that bill. He was an absolute rock at left guard, stoning his defenders on nearly every single play and keeping that left side of the pocket clean well more often than not. And he did it all despite battling a nasty virus.