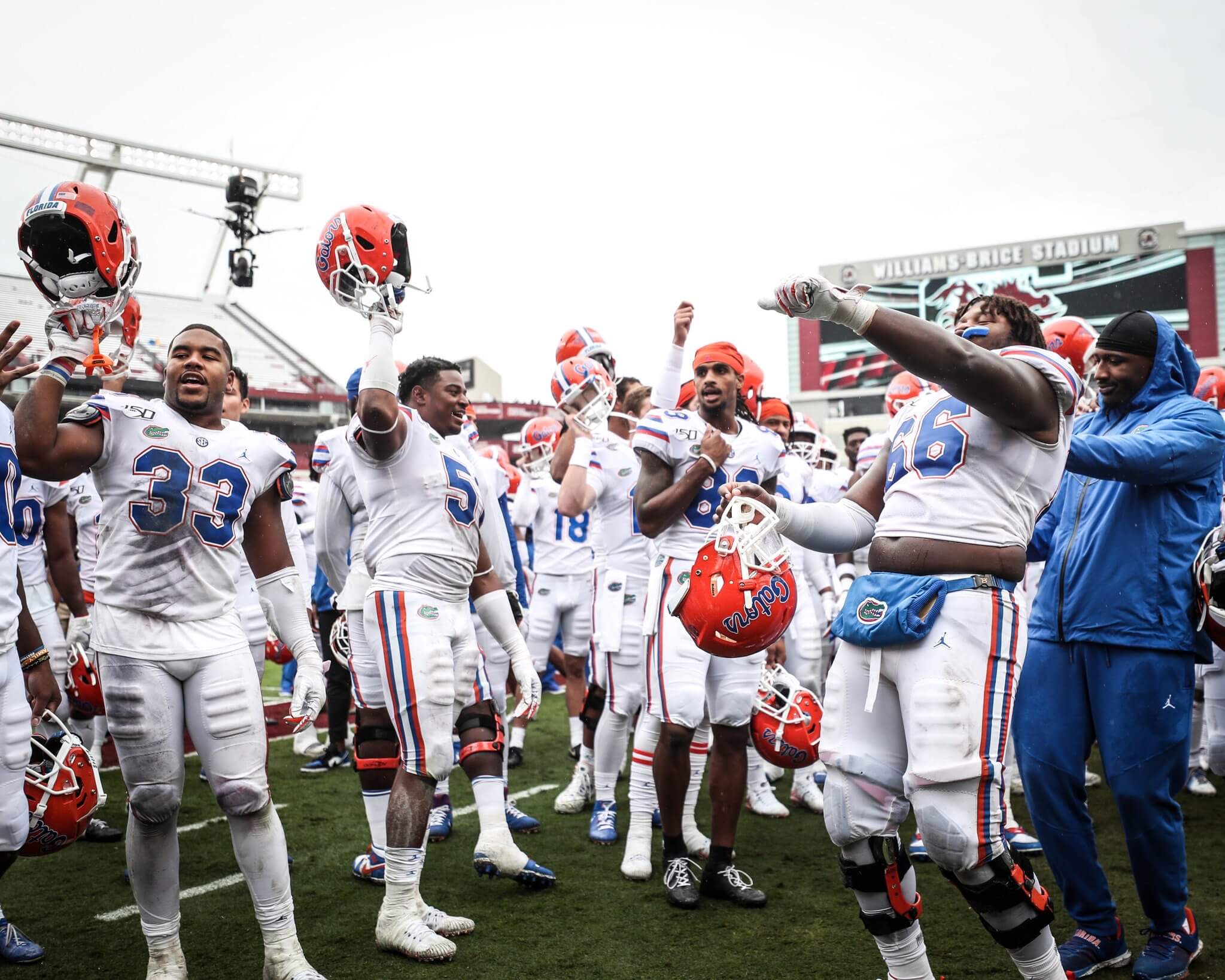 Everything remains right on the table for the Gators as the calendar prepares to flip to November. Now Florida gets to enjoy its bye week and catch its breath after a hard fought 38-27 win over South Carolina before getting back down to business and making that last push for the postseason.

Now as we always do, let’s take one last look back. Who earned a helmet sticker for Florida in Columbia?

-Trey Dean III, for his TFL on Tavien Feaster early in the first quarter (no timestamp). On a 2nd and 7, Dean blew past the line and grabbed Feaster, wrestling him down for a one yard loss. South Carolina would score on the ensuing play, but this was nonetheless a tremendous play by Dean.

-Kyle Trask and Jacob Copeland, each, for their 32 yard hookup (6:00 1st quarter). No better way to kick start the offense than with a bomb, especially in bad weather. Trask sold the play-action to LaMical Perine well before pulling it back and taking a shot down the left side of the field to the freshman Copeland. Excellent job by Trask to lead Copeland, and excellent job by Cope to track it through the falling rain.

-Tommy Townsend and Evan McPherson, for the hold and kick of McPherson’s 48 yard field goal (4:13 1st quarter). The snap wasn’t even that great, but Townsend did a great job of reaching back behind him to grab it, put the ball down and spin the laces away from McPherson. And of course, credit goes to McPherson for keeping his footing and booming this one through.

-Marco Wilson, for his touchdown saving tackle of Feaster late in the first quarter (:50 1st quarter). If not for Wilson’s hustle, this could have been a 14-3 deficit for the Gators. Initially in coverage on Bryan Edwards, Wilson recognized the run, broke away from Edwards and flagged Feaster down at the Gators’ 36 yard line. The tackle proved huge as Florida subsequently held on defense and forced a field goal.

-Kyle Trask, X2 and Jacob Copeland, X2, each, for their 38 yard touchdown hookup (10:18 2nd quarter). Trask did a hell of a job fitting this ball into a minuscule window between a pair of Gamecock defenders, but the main dose of credit goes to Copeland for his second big play of the day. Copeland turned around just in time- and not too early as to alert the defenders to the presence of the incoming ball, either- made the catch, immediately put his foot in the ground and turned it into a touchdown to tie the ballgame at 10-10.

-Jeremiah Moon, for his sack of Ryan Hilinski (6:14 2nd quarter). Some credit should go to the secondary here for its collective coverage, but Moon was the one who disengaged from his blocker and got to Hilinski just as he was about to take off. That killed the Gamecocks’ drive just inside its own 40 and forced a punt.

-Dameon Pierce, Kyle Pitts, Stone Forsythe, Richard Gouraige, Nick Buchanan, and Brett Heggie for Pierce’s 75 yard touchdown run (13:57 3rd quarter). Pretty much everyone involved on this play gets a helmet sticker. Just after South Carolina had picked off Trask and scored to take a 17-10 lead, Florida punched back with a simple counter play out of the shotgun. Pierce made one cut, and picked up key blocks from Pitts, Forsythe, Gouraige, Buchanan and Heggie and was gone. Not getting helmet stickers on this play: a pair of Gators who committed various penalties that the officiating crew missed. But credit goes to Pierce for the speed and his teammates who blocked for him (legally).

-CJ Henderson, for his sack of Hilinski (5:19 3rd quarter). A well timed corner blitz from DC Todd Grantham was not picked up by the Gamecocks, and thus Hilinski never saw Henderson coming. The Gators’ top rated cornerback flew into the backfield and buried Hilinski to turn 1st and goal from the six yard line into 2nd and goal from the fifteen. That put the Gamecocks way behind schedule, and they had to settle for a field goal.

-Tommy Townsend, X2, for his perfectly placed punt (:03 3rd quarter). Punters are people too! On the final play of the third quarter, Townsend hesitated a second to give his gunners time to get downfield, and then lofted a rainbow of a punt that Van Jefferson downed at the three yard line. Can’t do it much better than that.

-CJ Henderson, X2, for his TFL of Feaster (15:00 4th quarter). This was an early sign that the fourth quarter wasn’t going to go well for South Carolina. With teammate David Reese engaged, Henderson came off the edge and swallowed Feaster up for a one yard loss.

-Kyle Trask, X3, for his 3rd and 8 scramble (11:25 4th quarter). It went into the books as a five yard run, but the presence of mind Trask displayed to avoid a sack and a nine yard loss, and then on top of that to take off and turn the play into a five yard gain, might have been the play of the game if not for what transpired immediately after. It was the difference between 4th and 3 and 4th and 17 with eleven minutes to go in a game Florida trailed by three; who knows how the game may have played out if Trask is sacked there?

-Kyle Trask, X4, and Kyle Pitts, X2, each for their nine yard hookup (10:34 4th quarter). Candidate B of three consecutive plays vying for play of the game honors carries the same “if this play isn’t successful, how does the rest of the game play out?” question. On 4th and 3, Trask was immediately pressured, but managed to roll to his left, buy another few seconds and fit the ball through a tiny window to Pitts on an off-balance throw he made maybe half a second before getting leveled. And with a defender draped all over him, Pitts made the catch to keep the drive alive.

-Kyle Trask, X5, and Freddie Swain, each, for their 25 yard touchdown hookup (10:05 4th quarter). This was the play of the game. Sorry, last two plays. Trask sold the play-action to Perine, bought a few seconds, and found Swain down the right sideline. But though he was open, Swain was turned around and had to adjust for the football. Which he did, getting his footing, turning back around, locating the football, diving for it and somehow keeping his knees and elbows off the turf long enough to break the plane of the goal line with the football. As for Trask’s throw: any further down the field and it’s incomplete, any less far down the field and Swain probably catches it but doesn’t score, any farther away from the sideline and it’s broken up, and any closer to the sideline and Swain catches it out of bounds. And with the perfect amount of touch on it, too.

-Zach Carter and Kyree Campbell, each, for Carter’s strip sack of Hilinski and Campbell’s recovery (8:52 4th quarter). South Carolina was looking to regain some momentum after the Swain touchdown, and instead just gave Florida even more. Carter flogged the left tackle and buried Hilinski from his blind side, flicking the ball out in the process. Campbell then chased it down and fell on it at the Gamecocks’ 29 yard line to set Florida up in great field position to add to their lead- which they would do on a quick flip from Trask to Pitts.

-Trevon Grimes, Freddie Swain, X2, and Van Jefferson, each, for Grimes’ five yard touchdown catch (4:07 4th quarter). Grimes gets the credit for catching the football in the rain and navigating his way through the blocks to the end zone, but this play doesn’t work if not for Jefferson and Swain stonewalling their defenders. Jefferson even blocked a second Gamecock defender out of the play, just to make sure. It was almost like a running play, substituting offensive and defensive lineman for receivers and defensive backs. Expertly drawn up by Dan Mullen and Brian Johnson, and executed to perfection by his players.

-Trevon Grimes, X2, for his onside kick recovery (1:53, 4th quarter). Any time a player helps put the game away, he gets a helmet sticker. And it’s worth noting the high degree of difficulty to corral a slippery bouncing football in wet and muddy conditions.

Game ball goes to… Zach Carter. Copeland has an argument after breaking through for 89 yards on three catches in his most impressive performance to date, but I’m giving it to Carter because of how he finally broke through in a crunch time scenario. It’s undoubtedly been a learning curve for the youngster, and having to replace the tandem of Jabari Zuniga and Jonathan Greenard is utterly impossible, but when he had to make a play, he did. So the redshirt sophomore gets the game ball for his game-changing strip sack midway through the fourth quarter, as a reminder of what he’s capable of when Zuniga and Greenard head to the NFL after this year. First of many high level impact plays for you, Zach.