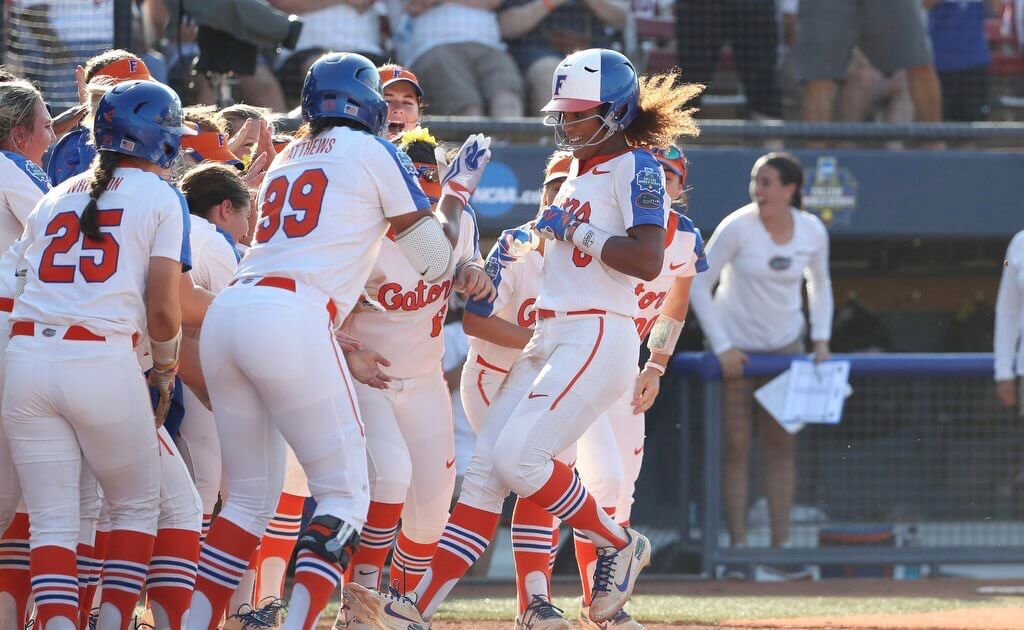 Georgia has celebrated a lot of victories over Florida over the course of the 2017-18 academic year. But on the biggest stage the schools have shared yet, it was Florida who raised the final toast, and Georgia who got thrown out of the party.

And the Bulldogs couldn’t even hang around until the end.

Tim Walton’s Gator softball team used home runs from Hannah Adams, Jordan Matthews and Aleshia Ocasio, an overall solid performance from Ocasio in the pitching circle, and some help from Georgia to pummel the Bulldogs, 11-3, in a shortened five inning mercy rule win. It’s the first time Georgia has been mercy ruled all season, and it serves as a bit of payback for the Gators after dropping two out of three to the Bulldogs in the regular season.

Georgia actually scored first. Ocasio left one up in the zone for Justice Milz and she pounded it over the fence for a two run homer to start the game. But that was the end of the Dawgs’ fun. Florida responded by promptly loading the bases and tying the game on Jordan Matthews’ two run double off the left field wall. The Gators then took the lead for keeps when Ocasio cleaned up the bases with a three run dinger over the right field wall.

Then the fun really began.

With the score now 6-3, Jordan Roberts stepped up to pinch hit for Matthews to eliminate the left-lefty matchups that would have resulted with Matthews facing southpaw Kylie Bass. And the move from Tim Walton proved to be golden:

THAT ONE IS WAYYYYYY OUTTA HERE!!!

Jordan Roberts delivers a pinch hit BOMB and the #Gators have knocked the Doggies down for the count at the #WCWS! pic.twitter.com/frptEhgpd5

An inning later, Adams belted a solo shot to increase the margin to 9-3, and then Georgia began the fatal walkathon. After the Dawgs had loaded the bases with three straight walks, Nicole DeWitt brought in the Gators’ tenth run of the game on a sac fly, and the bases were immediately reloaded when Kayli Kvistad walked. Moments later, Janell Wheaton took a pitch off the foot to bring home the eleventh run of the game to increase the margin to eight runs, which induced the mercy rule. Game over.

Now Florida moves on to the winner’s bracket to face UCLA, with a victory clearing a smooth road to the national championship. And the way they looked last night, that may ultimately be how this season ends.