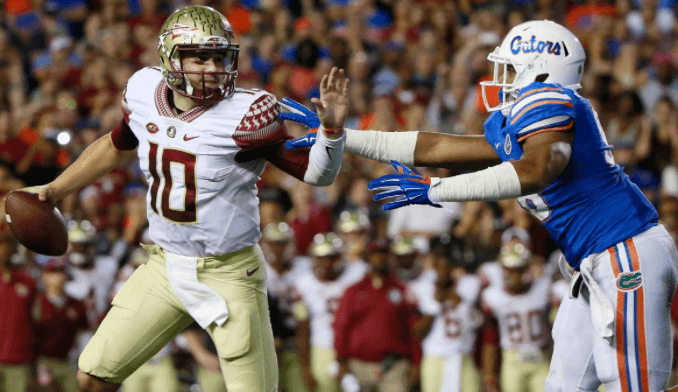 Synopsis: The Sunshine State Showdown heads west to Tallahassee this year, and it could shape up to be rivalry’s most memorable chapter in awhile. The Gators own this rivalry all time, though the Seminoles have utterly dominated the series throughout the past six years, scoring wins against John Brantley, Skylar Mornhinweg and Treon Harris. Now, though, Jim McElwain will make his maiden voyage to Tallahassee with (presumably) a serviceable quarterback and a similarly talented defense. Whoever wins, this game at least promises to be entertaining- and that’s more than you can say about the last half dozen.

The skinny: Lost amid the success of a ten win season in what was supposed to be a rebuilding year was a curious fact: the Seminoles were unceremoniously lit on fire by a good-but-not-great Houston team to the tune of 38 points and 448 yards in the Peach Bowl. Now, the Noles lose over half the statistical production from that defense. Of course, there’s the always dangerous Dalvin Cook to watch for, and betting against Jimbo Fisher has proven over time to be a supremely bad idea, but rebuilding the defense and getting solid quarterback play could prove to be a lot harder than most think. A nine win season seems like a cinch for FSU, and ten certainly seems plausible, but lay down money on them winning more than that at your own risk.

Offensive breakdown: There’s really just one thing standing between FSU and another run at a national title: quarterback play. Sean Maguire remains an uncertainty after fracturing his leg in the Peach Bowl loss to Houston, and if not him, the job comes down to JJ Cosentino and Deondre Francois. Francois appears to be ahead at the moment (meaning he’ll start the opener against Mississippi), but this position battle could wage on through the course of the season. Whoever it is, though, will need to play better than Maguire and Everett Golson did last year; better decision making is imperative for this offense to function more than half the time.

Then again, the quarterback’s minimum required production gets shrunk substantially with Dalvin Cook in the backfield. Cook battled injury at times last year, but there’s no doubting his talent. He tallied 1,691 yards on the ground despite missing the Syracuse game and being less than 100% in multiple others. There’s a bit of a drop off behind him in terms of experience, but there is five star talent Jacques Patrick, who picked up 314 rushing yards in limited action in 2015. Perhaps even more importantly, Cook and Patrick have a veteran offensive line to run behind. All five projected starting linemen started at least half the games in 2015, most notably all-ACC selection Rod Johnson at left tackle.

The Noles also appear to be in great shape at wide receiver. As much fun as it is to laugh at what a waste Ermon Lane has been, the rest of the wideouts are nothing to joke about. Jesus Wilson, LeVonte Whitfield and Travis Rudolph totaled over 2,300 receiving yards a year ago, and all are back in 2016. The key will be getting more production out of tight end Ryan Izzo, who filled in nicely for Nick O’Leary as a blocker but hasn’t yet taken off as a pass catcher.

Offensive overview: The ceiling for this offense is through the roof… if the Seminoles can get even decent play from their quarterback. A surplus of talent at the other positions will keep this offense from struggling too much, but finding that decent quarterback could mean the difference between 9-3 and another trip to the CFB Playoff. Grade: B+

Defensive breakdown: The Seminoles have to replace more talent than most people may think; Jalen Ramsey, LaMarcus Brutus, Nile Lawrence-Stample, Tyler Hunter, Reggie Northrup and Terrance Smith are all gone. As noted in the quick breakdown table at the beginning of the article, that’s over half the team’s statistical production. Replacing it all at once, even for FSU, is going to be a chore.

But at the same time, don’t mistake the lack of returning production for a lack of talent; pretty much everybody mentioned in this paragraph and the next one was a four or five star recruit. Sack leader DeMarcus Walker returns to anchor a veteran defensive line that also includes Josh Sweat and Derrick Nnadi. DeMarcus Christmas figures to step up into the vacant DT spot left by Lawrence-Stample, and if he acclimates himself well to being a starter, the Noles should once again have a ferocious defensive line. The linebacker position looks a little shakier; Ro’Derrick Hoskins is the lone returning starter in that middle level, and the Noles will have to count on Jacob Pugh and Matthew Thomas to step into the two OLB positions on a full time basis. And behind them, there isn’t really a whole lot of depth to speak of.

The secondary could be the key to the entire defense. Derwin James had a really nice freshman season at strong safety, and getting fellow safety Nate Andrews back for his senior season gives the unit some real experience. Tarvarus McFadden and Marquez White give FSU a pair of solid corners, but neither has the freakish natural ability nor the innate instincts of Jalen Ramsey. McFadden played in spots a year ago, while White slides up from his CB2 spot to the top corner post. How they adjust to their larger roles will go a long way in determining the unit’s success.

Defensive overview: Talent isn’t the question for the Noles. It wouldn’t shock me to someday see all eleven guys on this defense on NFL rosters. But replacing so many key contributors at once just doesn’t happen that easily, even when you reel in top ten recruiting classes year after year. Then again, underestimate Jimbo Fisher and his staff at your own peril. Grade: B

Key matchup: Florida’s front seven vs. Dalvin Cook. The Gators’ defense will never be credited for shutting down Cook in the 2015 game, because he finished with 183 yards on the ground. What many people tend to forget is that they did limit him to just 38 yards in the first three quarters before they went into “screw this, we quit” mode after watching Treon Harris orchestrate infield practice one too many times. But Florida once again has the type of aggressive and fast defense needed to hold Cook in check, and if they do, the Noles better find another way to move the ball.

The good news: Unless FSU magically develops a star QB out of nowhere a la Jameis Winston in 2013, the Gators know that the Noles really only have one reliable method of moving the ball. You know, the running game. So that’s what they’ll defend, stacking the box with seven or eight guys and daring FSU to beat them through the air. And if last year’s game was any indication, the Gators are more than capable of shutting down a one dimensional offense- even if that one dimension is as dangerous as Cook.

The bad news: FSU hasn’t lost a game in Doak Campbell Stadium since 2012… against Florida, yes, but now we’re in 2016. So that’s a three year period of invincibility the Gators will be trying to shake. Also, Florida is dangerously thin at linebacker, so there’s reason to be concerned about them tiring out late in a close game. Even if Cook is shut down for most of the game, all it takes is one play for him to torch the tiring middle level of the defense and be on his merry way- and in what figures to be a close game, one play could make the difference.

FSU wins if… they can get some production out of the passing game. It doesn’t matter how much NFL talent the Seminoles have at the wide receiver position if the guy in charge of getting them the ball struggles. If the Noles can prove that they’re capable of picking up yards through the air, though, they’ll force Florida to back off, and that subtracted pressure at the point of attack could make all the difference in getting Dalvin Cook some room to run.

Florida wins if… they have a big day on the ground. The Gators don’t have Dalvin Cook, but they do have a trio of talented backs in Mark Thompson, Jordan Cronkrite and Jordan Scarlett. Thompson in particular poses a serious threat, with a rare combination of raw power and speed that FSU may not see all year. If he gets going, it may be hard to stop him. Plus, the more of this game Cook watches from the sidelines, the better.

Overview: FSU fans have targeted 2016 as their return to the top ever since Jameis Winston and a slew of other major pieces to their 2013-14 powerhouse team left. But a relatively daunting schedule, lack of proven leader at quarterback and the task of replacing so many key contributors on defense at once leave reasons to hesitate. Make no mistake. The Noles are still quite vulnerable in 2016.

But they’re also ridiculously talented, as this defense, inexperienced as it may be, is littered with four and five star recruits, many of whom have sat behind and observed future NFL players for a year. Such young talent has a way of taking lumps early on, improving from week to week, and then coming together by the end of the season. It’s imperative to not mistake a lack of experience heading into the start of the season for a lack of experience heading into the end of the season.

I wouldn’t be surprised if Florida walked into Tallahassee and won with relative ease, because that would mean that either FSU never does find a dependable quarterback or their young defense just needs another year to blossom. I also wouldn’t be shocked if FSU protected its turf and completely flattened the Gators yet again. Just speaking generally, rivalries have a funny way of producing blowouts when you least expect them. But the most likely scenario is that we get a back and forth game that comes down to the wire. I reserve the right to change this pick if Florida develops some real quality depth at linebacker by Thanksgiving weekend, but as it stands right now, it’s a very thin unit that’s susceptible to collapsing, and that will ultimately make the difference. FSU wins on a touchdown from Cook in the waning moments.