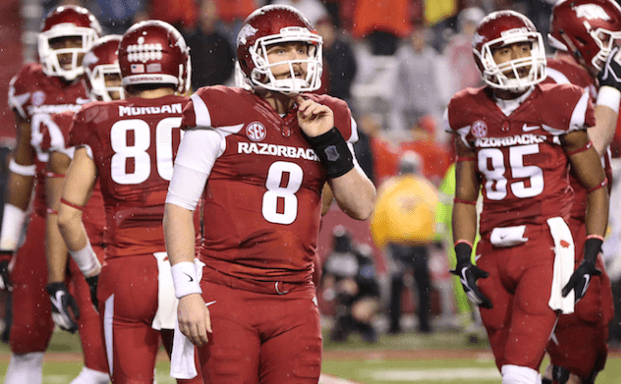 Synopsis: After beating Florida in the teams’ first ever meeting in the now defunct Bluebonnet Bowl, Arkansas has lost every subsequent game they’ve played against the Gators. All nine of them. The strange cross-division matchup schedules instituted by the SEC in the quarter of a century since Arkansas and South Carolina joined the SEC mean that these schools play each other once in a blue moon, so it’s hardly a rivalry. Nevertheless, various Florida-Arkansas games over the years have produced some memorable moments, and with the Gators presumably fighting for the SEC East, this year should be another.

The skinny: The 2015-16 personnel transition is an interesting one: the Razorbacks return most of their starters from a bad defense, and lose most of their starters from a good offense. Go figure. Bret Bielema’s squad does, however, have a reputation for playing their best ball in November, and a large part of that is his team’s ability to grow as the season progresses. His team may still be a year or two away from competing for the really big prizes, but they’re certainly capable of pulling some upsets this year.

Offensive breakdown: Even though the Razorbacks do lose a lot of production from 2015, there’s sill plenty of talent on the offensive side of the ball. Austin Allen takes over at QB for his big brother, Brandon, and he’s drawn high praise from coaches for his efforts in spring practice. His big arm and innate confidence for a youngster should open up the playbook once he demonstrates enough of both in live game action.

Similarly, don’t be fooled by the lack of returning starters at the skill positions. Arkansas says goodbye to tailback Alex Collins, but Rawleigh Williams and sixth year senior Kody Walker give them a solid one-two punch in the backfield. Williams put up 254 yards in six games- including an even 100 against Tennessee- last year before being injured. Walker, meanwhile, gives the Razorbacks plenty of experience, having gained 644 yards on the ground spread out over the past five years. And while the Razorbacks also lose star tight end Hunter Henry, their next four leading receivers- Drew Morgan, Dominique Reed, Jared Cornelius and tight end Jeremy Sprinkle- all return.

The problem for Arkansas is their offensive line. The Razorbacks return just two of their five offensive linemen from a year ago. It’s at the point that offensive coordinator Dan Enos had to convert one of his team’s defensive tackles into an offensive lineman. But on the bright side, one of those two returners is all-SEC tackle Dan Skipper. And while the unit’s combined experience may be down from a year ago, it’s still an Arkansas offensive line- in other words, a big group of guys looking to bully anybody in their way.

Offensive overview: Replacing your quarterback, top tailback, explosive tight end and three offensive linemen in the same year is never easy to do, but Arkansas appears to be about as well equipped to do it as you could expect. Allen is brimming with potential, and if the newly minted starters on the offensive line can adequately block for both Allen and his tailbacks, the Hogs could push opposing defenses all over the yard. Grade: B+

Defensive breakdown: You never knew what you were going to get with Arkansas’s defense in 2015. But with a bevy of returning starters, the Hogs figure to look more like their stout 2014 defense in 2016. It starts up front, where Deatrich Wise, Taiwan Johnson and Jeremiah Ledbetter return to their DE, DT and DE spots, respectively. And this unit has some real depth, too; the Hogs also get part-time starters and key contributors Tevin Beanum and JaMichael Winston back. Defensive coordinator Robb Smith is looking to fill the other tackle spot, and it appears as though Bijhon Jackson will win that role.

The middle level of the defense could be just as good, albeit not quite as deep. Dre Greenlaw is coming off of an exceptional freshman season, and he’ll once again team up with middle linebacker Brooks Ellis. But Smith needs to find another outside linebacker to help out the aforementioned two cemented starters. That job looks to be a battle between Khalia Hackett, Randy Ramsey, Dwayne Eugene and Josh Harris. (This is partly why Arkansas runs a 4-3 defense.) Despite the tremendous amount of talent in the front seven, though, Arkansas struggled at times to rush the passer in 2015. The hope is that with all the returning experience, they’ll be better in 2016.

But on the back end, there’s need for major improvement. The Razorbacks were lit up for 3,577 yards through the air in 13 games in 2015. Most of the guys from that defensive backfield return this year, and so they’ll simply have to play better. Corners DJ Dean and Jared Collins are both good in coverage, and safeties Josh Liddell and Henre’ Toliver provide the physicality. Now they’re a year older, smarter, stronger, and better, so there’s reason to believe that this unit will be better.

Defensive overview: Well… the talent is there, and the experience is too. Now: can they stop giving up so many yards? I’d be shocked if this defense didn’t make significant improvements in 2016, but at the same time, nobody’s mistaking this defense for Alabama’s. Grade: B-

Key matchup: Florida’s passing game vs. Arkansas defensive backs. Luke Del Rio should be well acclimated to his role as the Gators’ starter at this point, and hopefully, his receivers will have stepped up as well. If the Gators can find a second real threat opposite Antonio Callaway, Arkansas may be in over their heads in terms of covering the Florida receivers. It’s hard to imagine Luke Del Rio making many mistakes in this or any other game, and if his receivers can add an explosive dimension to the pass offense, the Razorbacks’ secondary could have another long day.

The good news: Arkansas’ offensive line may be big, but they look overmatched by a nasty Gator defensive line; Caleb Brantley and Cece Jefferson have wreaked havoc against offensive lines far better than the Razorbacks’ before. So it’s not exactly a stretch to say that either or both of them will have a big game. Nor is it a stretch to say that Florida should control the trenches completely when Arkansas has the ball.

The bad news: Arkansas is nearly impossible to beat in November under Bret Bielema. Try as you might, the Hogs will just pull off a wacky hook and lateral on a 4th and 25 if it comes to that and beat you just the same. Credit Bielema and his staff for making week to week adjustments, and the players for growing as the season progresses, but it’s a known fact that the Razorbacks play their best at the end of the year.

Arkansas wins if… they can get some production out of the running game. They’re got the running backs to get yards and maintain long drives, but their offensive line can’t allow Florida into the backfield on a consistent basis. And the longer they can keep the Gators’ defense on the field, the better chances they’ll have of wearing out Florida’s talented but thin linebackers corps.

Florida wins if… the Gators don’t turn the ball over. Turnovers are any underdog’s best friend, and doubly so when the underdog is the home team. Between Mark Thompson’s known ball security issues, potential crowd volume, Florida’s iffy offensive line, and Arkansas’ tenacious front four, the possibility of mistakes are certainly on the table.

Overview: Arkansas on the road in November is like a snake whose venom affects the Gators in a particularly nasty way. Or any opponent, really. Sure, Florida looks like the better team, and they’ll probably finish the season with a better record and a higher ranking than Arkansas. But my game projections have the Gators coming into Fayetteville at 7-1, which means that they’ll also have the SEC East wrapped up before this game kicks off… and thus, the potential for a letdown is there. This game just screams “TRAP” to me, and despite the Gators having the better team, Arkansas will get the best of them in this one.