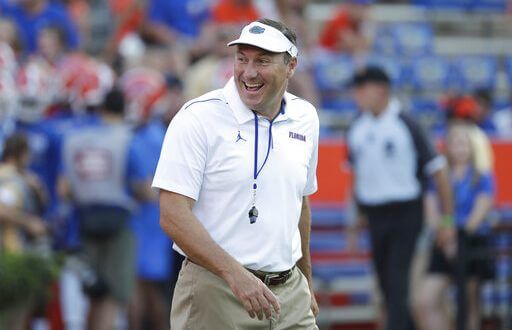 Thanks to the invention of the Early Signing Period, most teams’ recruiting classes are more or less complete in December, which doesn’t leave a ton of room for excitement or developments on the first Wednesday of February.  But there is still some.

At least in theory, Florida is still in the mix for six different prospects today, one of whom I strongly believe will be a Gator (Avantae Williams). And Florida is expecting to add a couple of LOIs today from commits in that 2020 class for various reasons. So there’s still plenty of activity to keep your eyes out for today.

Keep checking back here and following along as things happen.

8:32am: Xzavier Henderson’s letter of intent is in. Not that there was ever doubt about this after he committed, but there will officially be three more years of a Henderson brother in the Swamp.

9:41am: Damarcus Beckwith will be a Tennessee Volunteer, as I projected yesterday. It would have been a nice surprise, that’s all.

11:00am: things are about to pick up here, for better or worse. Five prospects are scheduled to announce over the next four and a half hours, including safety Avantae Williams, who has moved up his announcement time to 12:30pm today. Florida also has a hat on the table- though they are a LONG shot- for current Colorado running back commit Ashaad Clayton and Georgia offensive tackle commit Sedrick Van Pran, who will be announcing within the next hour.

11:18am: running back Ashaad Clayton has stuck with his Colorado commitment. As was the case with Beckwith, not a surprise. 2/2 for my predictions so far.

11:35am: offensive tackle Sedrick Van Pran has stuck with his Georgia commitment. Same story as Beckwith and Clayton.

12:02pm: We’re approaching decision time for safety  Avantae Williams, the prospect that Florida has by far the best chance to add to its recruiting class today. I would think/hope that someone in DeLand will do a live video of his announcement; if someone does and I can find it, I’ll link to it in this post.

12:35pm: in the stunner of the day, safety Avantae Williams has chosen Miami over Florida. This is still a good class for the Gators, but that is an absolutely humiliating way to close the cycle. No two ways about it.

12:53pm: I am in SHOCK. Letting Williams go to a 6-7 Miami program is not going to drive this program into the gutter, but that’s a bad, bad miss for safety coach Ron English and this Florida staff. And it’s the kind of miss that if enough of them happen over time, it eventually might… though, let’s be clear, pump the brakes, this is one such miss and we’re nowhere near that point yet. It’s also a bad enough miss that it’s legitimately worth having a long, detailed discussion about English’s job future at Florida so we ensure we don’t get to that point, because let’s face it, this is not the first safety prospect English has missed on. That doesn’t mean I’m calling for him to be fired, at least not yet, but now the pressure is on him to land a top flight safety in the class of 2021. Remember, at the collegiate level if you can’t recruit the position you coach, you’re just dead weight. I’m willing to give him one more chance, because after all he did land Rashad Torrence in this cycle and safety was only a low-level need this class, but losing a highly sought after playmaker to a vastly inferior rival is utterly unacceptable.

3:33pm: all’s well that ends well; four star defensive end Princely Umanmielen has spurned in-state schools Texas and Baylor and signed with Florida. Effectively, Florida countered a surprise that didn’t go their way with another one that did, and in the process added a kid at a position they need even more than safety. Don’t get me wrong, losing Avantae Williams is still bad, and it puts the Gators’ staff in desperation mode on the recruiting trail next cycle to land a couple of big time safeties, but defensive end was the bigger need and Florida has now more than filled it in this class.

4:15pm: barring another, even bigger surprise or a couple of letters-of-intent rolling in later tonight (specifically from Mordecai McDaniel), Florida’s day is done. The overarching recruiting class wrap-up is coming soon. Thanks for following along, and keep checking back here in case one of those LOIs do find their way to Gainesville tonight.