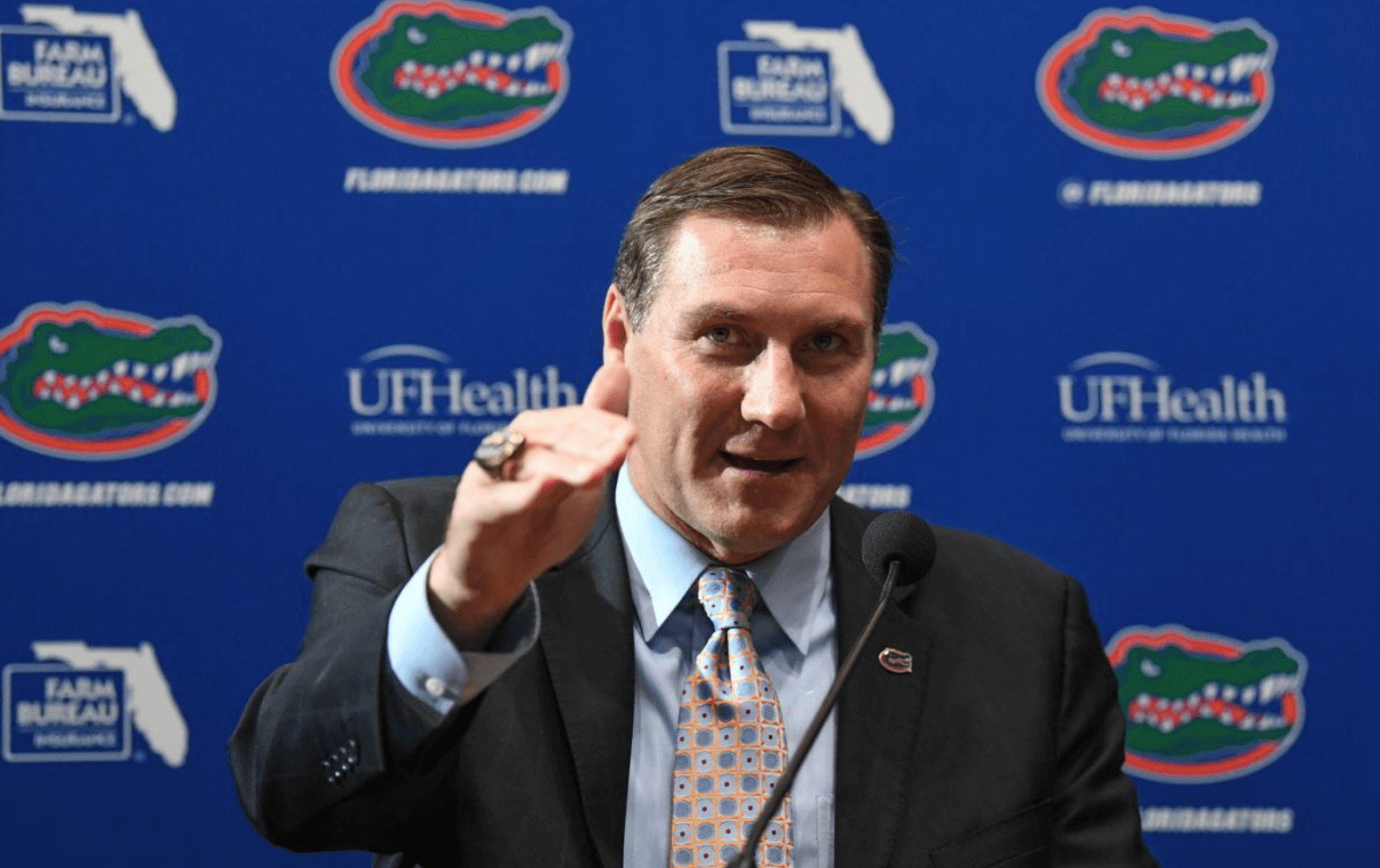 The Gators are hosting their annual Friday Night Lights camp for potential future Gators tonight, and as usual, there will be plenty of talent in the Swamp at the event.

This is the last really good chance Florida has before the season begins to lock up some recruits, but don’t be surprised if the Gators don’t land any commitments out of the evening. It’s not uncommon for players to give their word to coaches behind closed doors, wait a week or two and then announce in a recruiting video.

One player who will not be attending is five star defensive lineman Kayvon Thibodeaux:

…yet Thibodeaux is somehow still going to visit FSU, and perhaps more galling, FAMU. It may be time to just forget about him completely.

But no worries, because there will be plenty of talent on hand this evening.

Here’s a look at the 2019 recruits who, as of this publishing and barring an eleventh hour change of plans like Thibodeaux, will be in the house:

Florida will be going for a flip here, and there’s some real reason to believe that they can get it. Brownlee received an offer just this week and responded by immediately creating a trip to Gainesville tonight.

LSU and Ole Miss are each thought to have a chance, but Florida has been rapidly gaining ground with Kimbrough and can seal the deal tonight. Pencil Kimbrough in as a likely commitment out of the event.

Taylor is considered to be a Marshall lean despite offers from Michigan, Mississippi, Miami, Alabama and Auburn and despite showing interest in Florida out of high school. He’s a bigger catch than his ranking indicates, though, and this will be his first ever meeting with Dan Mullen.

The former Gator commit will have a chance to be won back with the new staff tonight. Watkins, like Taylor, will be meeting Mullen and his staff for the first time tonight. Mullen is going to get a battle from his old school in Starkville for his services, but has a golden opportunity to lock him back up tonight.

Abrams is a Gator lock. He’s here to do some recruiting.

Jones is the only offensive lineman participating in tonight’s camp. He’ll be trying to impress coaches enough to earn an offer.

The local kid out of Gainesville’s FW Buchholz High School is here to test out his skills against some top level talent- and of course, to recruit.

Florida’s old friends Travaris Robinson and Will Muschamp are making a strong push for Hill to come to the Palmetto State, with Tennessee in hot pursuit. But Florida can hop both of them into the lead for him if he’s impressed enough tonight.

I seriously doubt Jones is going anywhere. This is, however, a chance for him to improve on his three star stock.

Would you believe Matt Elam, who donned the orange and blue just six years ago, has a nephew? Well here he is, and Florida has a chance to see him follow in Uncle Matt’s footsteps. Beware, though, as Ohio State and Georgia are in hot pursuit.

He’s here to lace up the cleats and get some reps against top notch talent. White is a Gator lock.

Easily the most enigmatic and intriguing prospect on campus tonight. Zipperer, a former UF recruit, has recently thought to be trending toward Miami, but the Gators can retrieve him tonight. Also worth noting: there are very few players who Alabama actively pursues- not just sends an offer letter to, but aggressively chases after and desperately wants- that turn them down. Zipperer is one of those few.

Jones is making his second visit to Gainesville this offseason, but Florida is definitely fighting an uphill battle with him. Ex FSU coach Jimbo Fisher appears to have the edge with him at Texas A&M.

The once Mississippi commit takes his first visit to Gainesville in his quest for a new home. Oklahoma is thought to lead for him, but let’s see what the Gator staff can do tonight.

The biggest Florida-FSU recruiting battle in the 2019 class is likely going to be for Summerall, out of Auburndale. FSU appears to be quietly confident in their pursuit of Summerall, but this will be Summerall’s third visit to Gainesville since April 27, while he hasn’t visited Tallahassee since February. The Gators can reel in the biggest catch of their entire class if he likes what he sees tonight.

He’ll be donning orange and blue. He’s just here for the event. And to recruit.

Duncan hasn’t received as much attention from a power five school as he has from Florida. Keep an eye on him to possibly commit within a week or two.

Miami is thought to lead for Wright, but the Gators can steal him out of the Hurricanes’ backyard if they make a strong impression on him tonight.

James Franklin and Penn State are making a run at Weston. A trip to the Swamp for Friday Night Lights could be just what the doctor ordered to fend them off.

Florida has a real chance to flip Black given his close relationship with Mullen from his days at Mississippi State. The higher stature of the Gator program compared to the two Mississippi schools might be enough for him to do it.

Georgia’s not giving up on Humphries, who hails from Lawrenceville, GA. So the Gators are going to use this opportunity to reaffirm his commitment and remind him why he wants to be a Gator.

The Tampa product is considered a strong Gator lean. Let’s see if Florida can finish it off and grab him tonight.

The Gators will also have plenty of 2020 commits in the house: