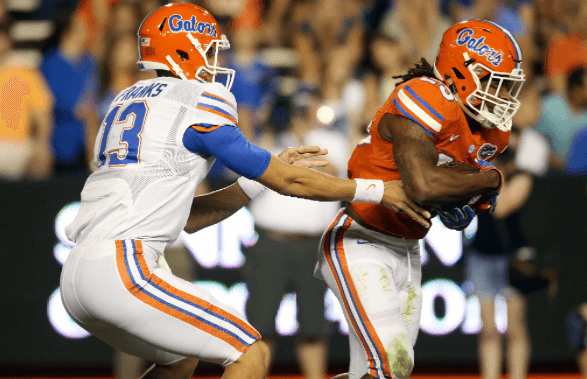 Florida’s 2017 season semi-officially kicks off tonight with the Orange and Blue debut in the Swamp. As we get our first preview of Jim McElwain’s third and possibly most highly anticipated team, there are more than a few things to keep an eye out for.

Everyone knows Franks belongs in any list or preview about tonight’s game, so let’s just put him front and center, the way he’s going to be in fans’ minds starting tonight. Franks has made tremendous strides this spring and looks like an entirely different quarterback than the inexperienced kid we saw last year. He’s hitting receivers in stride, developed timing with them, and is making much better decisions regarding where and who to throw the ball to. That’s all well and good, but he still hasn’t done it in a live game. And while tonight won’t exactly fit that bill, it’s a major step closer to it than a closed practice in the IFC.

2) Young stars in the front seven

Florida’s defense may be young, but there’s still a world of talent on that side of the ball. And I’m not just referring to future first round pick Cece Jefferson. Sophomore linebackers Vosean Joseph and David Reese and linemen Jachai Polite and Jabari Zuniga- all three stars by the way, so great job recruiting “experts”, a round of applause for you- all played extensive snaps as freshmen last season and will likely move into full time starting roles this year. Keep an eye on these four tonight, as their development will be the Gators’ key to stopping the run this year.

After teasing fans with flashes as a freshman, running back Jordan Scarlett toyed with stardom last year and now appears poised for a breakout junior year. He’s constantly being pushed by Mark Thompson and LaMical Perine for carries, but Scarlett is clearly the Gators’ most complete back and figures to get the majority of the touches. We know what we’re going to get out him at this point- hard, angry running along with the occasional juke- but it’ll be nice to see it again once more before September instead of just hearing about it or remembering it.

Given the traditional starters vs. backups configuration of the Orange and Blue game, there won’t be too many of these. But there will be some, most notably when Feleipe Franks is throwing against the starting secondary. We’ll also likely see some starters on both sides of the line going at each other at some point, and we may even see some of our big name wideouts- like Antonio Callaway or Tyrie Cleveland, for example- go up against Duke Dawson or Chauncey Gardner. These types of matchups are the true test of where individuals stand, as their competitors more closely resemble what they’ll be facing when they’re wearing enemy colors.

Jim McElwain became forever posterized in a screenshot during last year’s spring game when he pulled aside a clearly shaken Feleipe Franks and reassured him following a pick six. How he’ll coach up Franks this time around now that he’s all but wrapped up the starting job is something I’ve been waiting to see ever since he arrived in Gainesville. Does he nitpick when Franks is heating up, trying to keep him humble through success? Does he turn up the heat on Franks if he makes a mistake now that he expects more out of him? We’ve never really seen a Gator QB have consistent success under McElwain- no, four games with Will Grier doesn’t count- and now it’s time to see how he deals with them when they do.