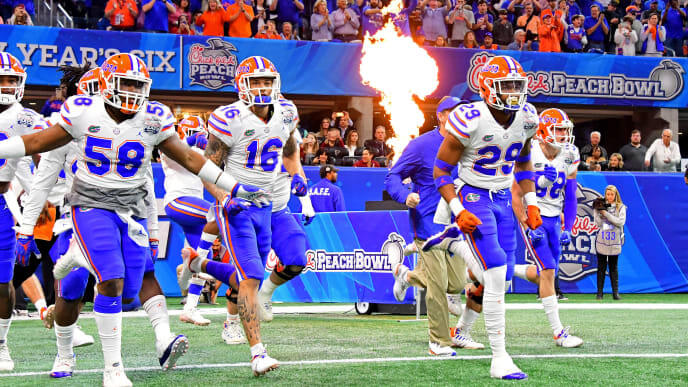 It’s always great to be a Florida Gator, as the saying goes. But Thanksgiving is a time to be especially grateful for all the positives in life, and so today, here are the five things that I’m most thankful for as a Gator fan.

5: Florida’s various home arenas and stadiums. The O’Connell Center has undergone extensive renovations over the last decade, and Katie Seashole Pressly Stadium, the backyard of Gator softball, just got a massive upgrade last year. But that was all just a teaser. Construction of a brand new, state of the art Gator baseball park is underway and is expected to be ready for next season. And though it’s down on the list, renovations to the Swamp are coming a few years from now. On top of that, each of those home playing surfaces are colloquially known as some of the toughest venues for opponents to play in (although admittedly the O’Dome’s reputation for that has taken a huge hit under Mike White.)

4: The 1997 Sugar Bowl. A head to head win over your archrival in a national championship game is the ultimate bragging right, particularly when it’s a 52-20 curb stomping. And thanks to Steve Spurrier and his Fun N Gun, Florida has that unique bragging right over FSU. And my use of the word unique is literal; that Sugar Bowl still stands as the only time this has ever happened in Division I college football. No other school in America has ever recorded a single victory over its biggest rival that can be cited by its fanbase as an argument ender at any given time.

3: A local treasure trove of recruiting hotbeds. Simply by being located in Gainesville, the University of Florida is able to play the “stay close to home” card with top recruits in the gold mines of the Miami, Tampa, Orlando and Jacksonville and Atlanta metroplexes. No other state produces the level of talent that the Sunshine State does- in any sport- and the bordering state of Georgia has an argument for second place. There’s a reason Bear Bryant once labeled Florida as the SEC’s sleeping giant. And as point 3B, let’s all be thankful that said giant has been awaken.

2: AD Scott Stricklin. I more or less tipped my hand with this last night on twitter, but he is so incredible at every aspect of his job that he deserves two shoutouts. Between hiring Dan Mullen, the new Florida baseball and softball parks, facility upgrades across the board, strengthening our football schedule with home and homes against Texas, Miami and half the PAC-12, engaging with fans on twitter, and the orange (now blue) end zones- he just GETS it. We’re lucky to have the best AD in America.