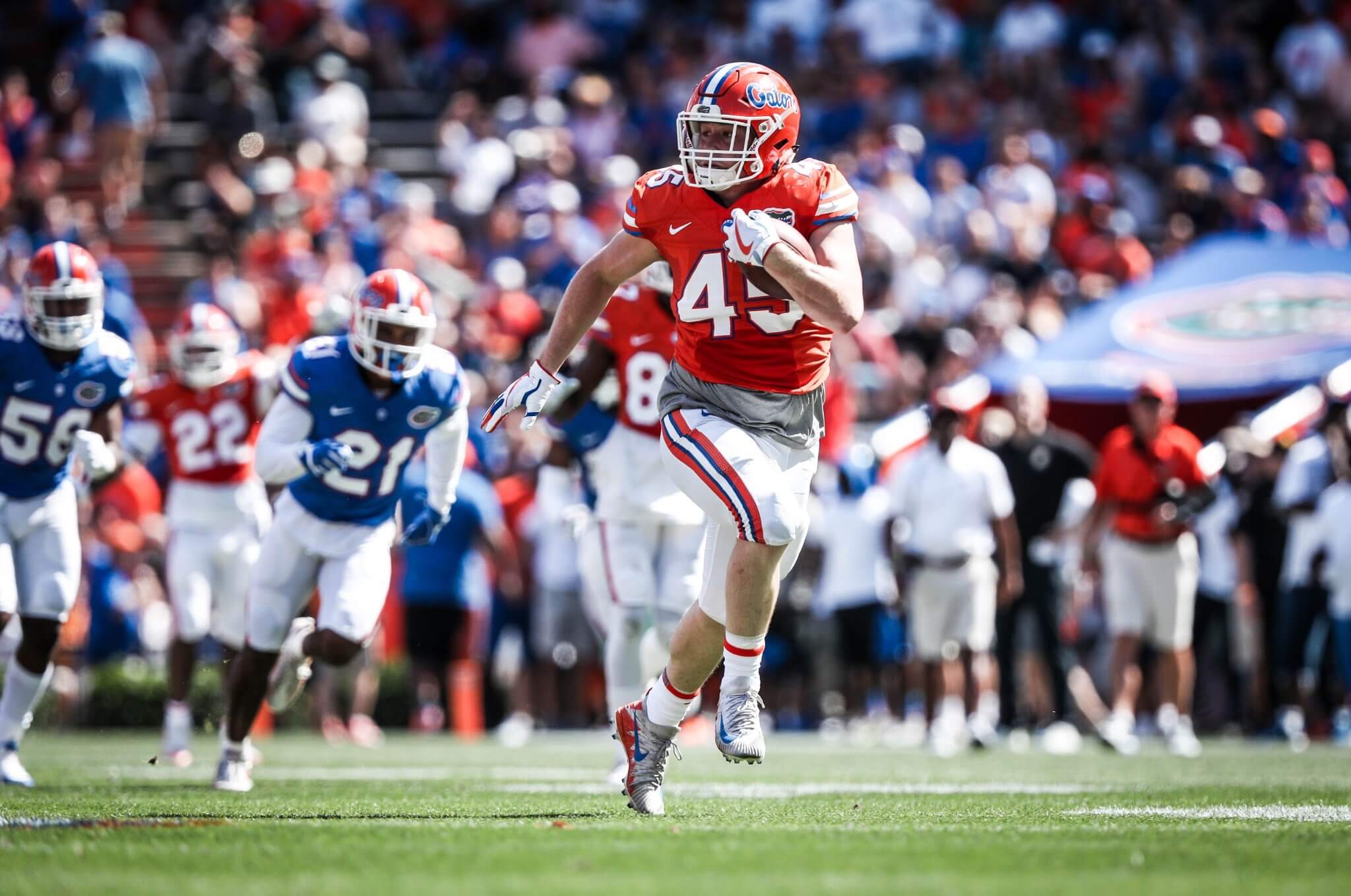 Florida’s first spring practice under Dan Mullen wrapped up yesterday with the annual Orange and Blue spring game. Among many things to take away from it, five in particular stuck out to me.

5: DBU should remain in Gainesville. Now, as hard as it is to judge anybody by a spring game, the hardest positions to judge are on defense. That said, the Gators’ defensive backfield looked just fine. We know what Marco Wilson can do, and CJ Henderson reminded us all of his ball skills with an acrobatic PBU. So Florida’s good at the corner spots. Meanwhile, freshman Amari Burney looked fantastic when he got his chance late in the game, even causing Dan Mullen to single him out for praise late in the telecast.

4: Florida may have its strongest set of running backs in a decade. Think about this. Florida will have three running backs who were at one time the Gators’ featured back in 2018: Jordan Scarlett, LaMical Perine and Malik Davis. That is a terrifying thought for opponents, and a reassuring one for whichever work-in-progress QB Dan Mullen ends up tanning as the starter. One of those (Davis) didn’t even play because of a knee injury, nor did Adarius Lemons for the same reason. But it was Scarlett who asserted his dominance the most having a monster showing in his first real action since New Years Day of 2017. Scarlett totaled 57 yards on ten carries, including one for 28 yards down the right sideline.

3: Emory Jones may be the Gators’ future. There really wasn’t a whole lot to read about regarding Jones this spring, as he was fine for the most part but didn’t exactly do anything to make your eyes pop out, either. But the former Ohio State commit more than made up for that with a “wow” level spring game. Jones highlighted a multi-faceted highlight-filled day with a bullet over the middle to RJ Raymond, who pulled a Mike-Dyer-vs.-Oregon-in-the-2010-national-championship rollover move then raced into the end zone for the score. Already, Jones is both faster and better mechanically than Tim Tebow ever was, although his accuracy needs work. So by no means am I suggesting he’ll have the type of success Tebow did in college, but the future is leaps and bounds brighter with him than it is with Feleipe Franks. The noise is all about a two man battle between Kyle Trask and Feleipe Franks, but if Dan Mullen is willing to start a true freshman and work with him during the growing pains that almost all true freshmen go through, Jones is the Gators’ best bet both for this season and the long haul. And you could do a lot worse than Kyle Trask as your backup.

2: Operation #PackTheSwamp was a success. Florida fans definitely got the message that Dan Mullen wanted them there, and the Gator Nation showed up in full force. Florida has had embarrassing attendance issues the past few seasons, and granted, that’s due in large part to the respective coaching staffs’ ineptitude, but the local fans didn’t always do their part, either. Anyway, showing up to the spring game was an excellent indication of how the fan base thinks of Mullen, and though attendance will ultimately hinge on how many wins Mullen can deliver, he’s got a great base following. The rest is up to him and his team.

1: Feleipe Franks is still not an SEC caliber QB. A popular misconception is that I have some sort of personal vendetta against Franks. This is not true. Franks is a Florida Gator, so I naturally want him to succeed because if he succeeds, Florida succeeds. The problem is that the sum of his live game performances does not provide me with legitimate reason to believe that he will, and I refuse to equivocate blind faith and sheer wishing with reason. And he did nothing yesterday to change that. Twice, Franks threw quacking geese into quadruple coverage, and those two plays alone demonstrate that he is not any more ready for the live game speed of the SEC than he was last year. Sure, he ran untouched for a 60 yard touchdown, but that was literally because the defense was instructed not to touch him. He may get some early season playing time because he’s the incumbent or because Dan Mullen wants Emory Jones to learn a little bit more, but if he’s ultimately the guy the Gators are relying on, it’s going to be a long season. Put it this way: Chauncey Gardner carrying him off the field with big smiles and Franks’ reverse dunk was cool in the moment, but Florida’s best suited to move forward in the long run with somebody other than him taking the snaps.