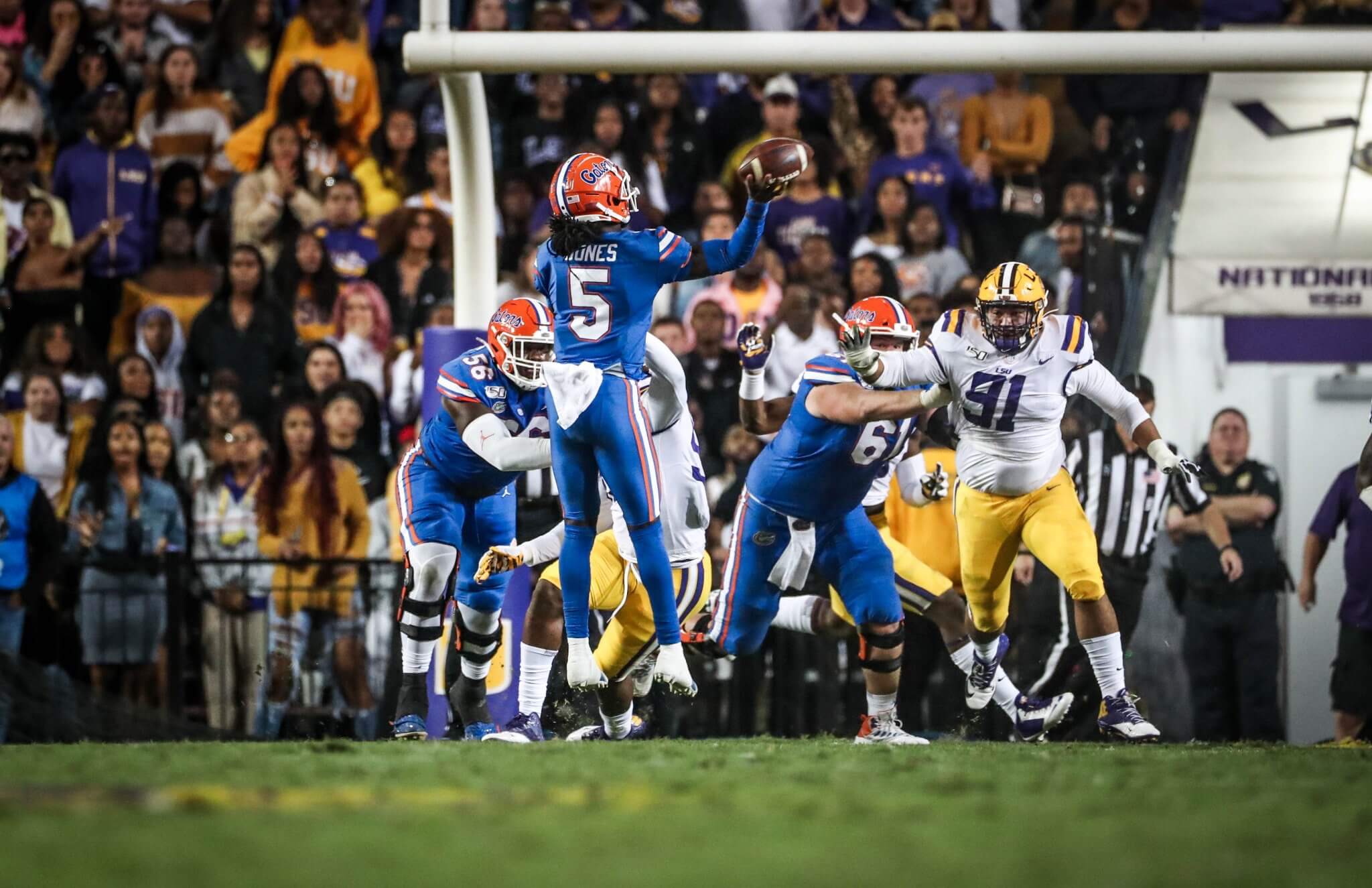 There was absolutely no shame in Florida’s 42-28 loss on the road to LSU– but as is the case with every loss (and every game, really) there were a lot of things to look back at, and focus on improving moving forward.

1: I have no clue what to make of Todd Grantham anymore. Florida’s defense was severely depleted on Saturday night, to be sure. The Gators were down Jonathan Greenard, Jabari Zuniga was only about 30%, and CJ Henderson was only about 90%. And his whole defense is predicated on the idea that he has the monsters up front to provide pressure. Without them, though, Florida’s DB’s continued to provide LSU receivers with huge cushions off the line, and that gave Burrow more than enough time to do whatever he wanted. It was just… shall we say… too cautious and relaxed of an approach against a well oiled machine of an offense. And this came a week after calling the best game of his life against Auburn… in which he did have Greenard (but not Zuniga). I’m not calling for Grantham to be fired, to be clear, because I don’t let one single game or showing sway me like that, and I think the positive end of the risk/reward spectrum with him is off the charts high. And blitzing the house and NOT getting to Burrow is no better than just sitting back- which is what very well might have happened without Greenard or a healthy Zuniga. But I will say that sometimes, he leaves me scratching my head.

2: Kyle Trask has the IT factor. Let’s be real with ourselves. Trask is poised, calm, accurate under pressure, and in short ten times the quarterback Feleipe Franks is. Why Dan Mullen went with Franks all this time over Trask is beyond me, but in the name of staying proactive: at last, Florida has a quarterback with the precise mental fortitude and enough physical characteristics to win a championship. In the face of pressure in a hostile environment, there he was, standing tall and delivering strike after strike into tight windows. I wouldn’t go as far as to say he’s the prototypical signal caller for a Mullen offense, but he’s gutsy enough and a good enough passer for this team to win the East. Whether they do or not depends on other areas of the roster.

3: The offensive line needs to improve, and fast. I don’t really think anybody on the offensive line has been great at any point in the year with the possible exception of Brett Heggie for a game or two. And while some of that is certainly due to the level of competition, that can’t be used as an excuse anymore. If Florida is really going to make a run for Atlanta, the offensive line has to step it up to the point where it’s at least holding its own. On Saturday against LSU, all five offensive linemen were caught blocking air at least once- and only one (Chris Bleich, the right guard) wasn’t caught doing it more than once. Which, OK: it’s LSU, with an ultra-physical defensive unit that makes a lot of offensive linemen do that. And I do trust John Hevesy and the linemen to make serious strides for next year. But if the Gators are going to be a player for the CFP this year, this unit has to start showing improvement, pronto.

4: Kyle Pitts may be the best tight end in college football. If he isn’t, I certainly haven’t seen anyone better. He’s a natural mismatch at the position that frequently makes opposing players scream at each other. You can’t put a linebacker on him, and putting a true corner on him leaves a mismatch with one of Florida’s true wideouts against an opposing cornerback a rung or two down the CB depth chart. And while this was more or less to be expected against Kentucky, Tennessee or Miami, this held true against Auburn and now LSU as well, meaning it’s not a fluke. He’s basically a wide receiver with the body and blocking abilities of a tight end. Don’t be surprised if Pitts finds himself hoisting the John Mackey Award in December.

5: Mullen has rebuilt this program’s pride. This is probably not cool, but I don’t care and so I’m gonna throw it out there anyway: this was a broken program at this time two years ago. The Gators had quit. They’d shut down the operation and to be blunt, just did not give a fraction of a f#%k about anything or anyone other than themselves. And those memories of players skulking around during abominable losses to Georgia, Missouri and FSU in 2017 made the bittersweet scene in Death Valley that much sweeter: the entire team staying on the field after a loss to sing the school alma mater and fight song with the band. Call it cheesy, corny, or whatever, but any and all team chemistry starts with a shared love for the logo on the front of the jersey. And so on Saturday night, it was clear that Mullen had instilled the following value into his team: we may lose the game, but not until we’ve given it all we’ve got- and even then, we’re going to pay respect to the brand we represent to remind us that we’re all part of something bigger than ourselves.