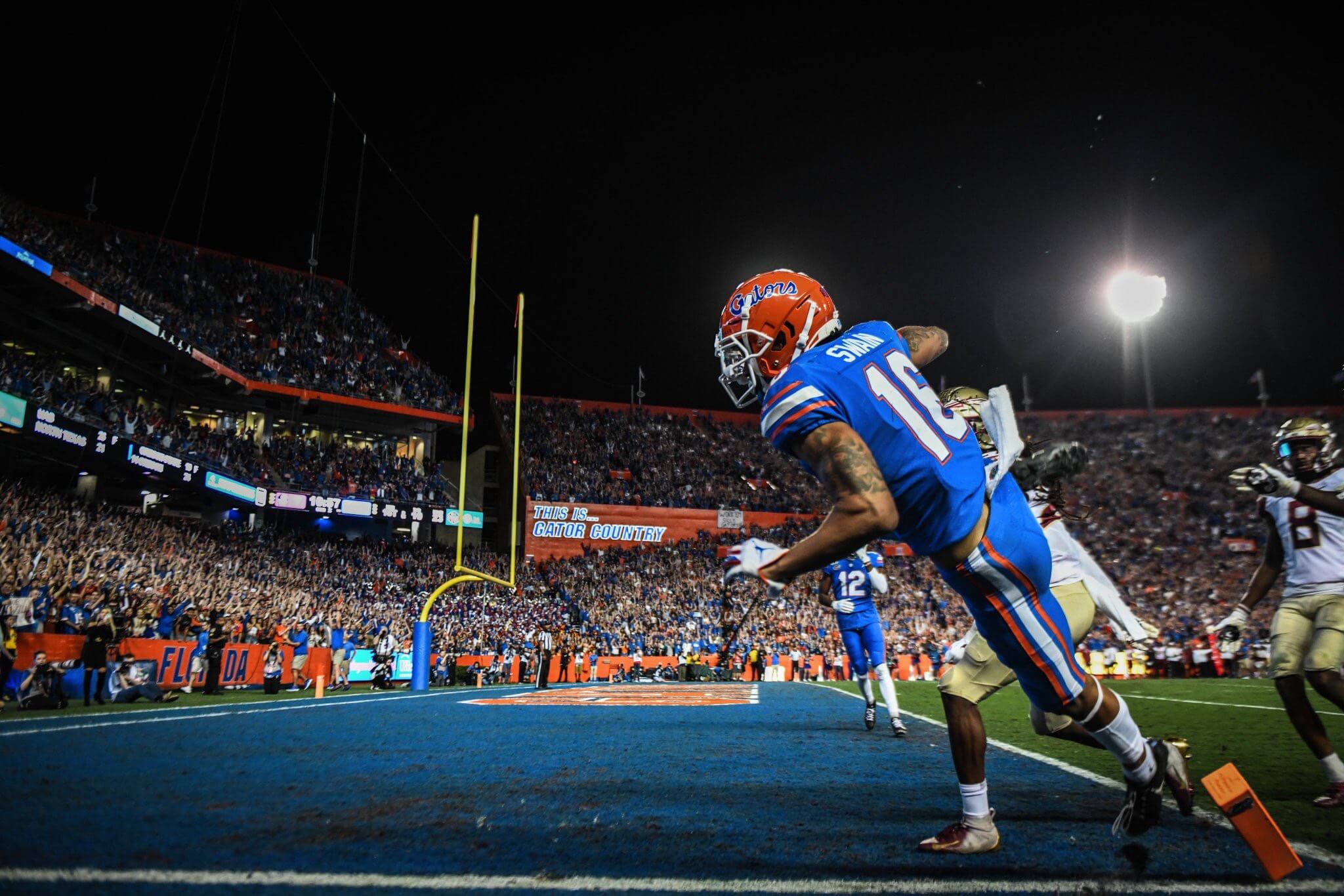 The Gators wrapped up their regular season with an easy 40-17 victory over archrival FSU on Saturday, and in doing so, put themselves in great position for a New Year’s Six bowl to cap their 2019 campaign. What stood out in Florida’s conquering of the Noles?

1: The Swamp is back to being a place where only Gators get out alive. Horrifying home losses to Kentucky and Missouri a year ago put a damper on an otherwise stellar inaugural season for Dan Mullen in Gainesville, so Mullen and his players made it their mission to defend the Swamp in his second year. Well, mission successful. Florida went a perfect 6-0 in Ben Hill Griffin Stadium this season, with all six wins coming by double digits and four of them coming by 30 points or more. In fact, the Gators’ 23 point win over FSU was the second closest game they played at home all year. Give the players credit for executing, sure, but give the Gator fan base one massive tally in the assist column.

2: Florida played smarter, more disciplined football. The Seminoles made sure to display all the reasons why they fired Willie Taggart in this game. A muffed punt by Freddie Swain and a fourth down stop by the FSU defense were each nullified by pre-snap penalties on the Noles. FSU’s Cyrus Fagan was ejected for the textbook definition of targeting on a hit applied near the sideline, inside the FSU two yard line. And FSU was flagged twice for post-play idiocy: once where Hamsah Nasirildeen threw Kyle Pitts to the ground well after he’d stepped out of bounds, and once when DJ Matthews shoved Marco Wilson (who, to be fair, flopped to the ground like he’d been shot). Other than a stray personal foul on Pitts once the game was already over, the Gators pretty much steered clear of all self destructive behavior, which is a testament to the discipline that Mullen is preaching.

3: Mullen called off the dogs in the second half. For all the Seminole fans caterwauling about how mean it was for Mullen to order a fake punt up by three possessions, the truth is the final score could have been so much worse than 40-17 had Mullen cared enough to make it worse. Following a touchdown from Emory Jones to Van Jefferson to make it 37-10 midway through the third quarter, Florida essentially stopped trying, and that was a little surprising given that earlier this month Mullen brazenly ran it up on Derek Mason’s Vanderbilt Commodores. You can’t hate a coach protecting his players from injury by trying to drain the clock with a huge lead, especially after what happened to Tua Tagovailoa with a 35-7 lead, but you’d think a fan base would just be thankful Mullen didn’t make it a point to embarrass them more than he did.

4: Priority number one this offseason has to be developing a running game. I would have thought that if any team could cure the Gators’ woes in the ground game, it would have been FSU. But no, not even against FSU, a notoriously weak defense that was missing several starters coming into the game and lost several more as the game went on, could Florida run the ball. The Gators could only muster an anemic 77 yards on the ground on 25 carries, and 15 of those yards came on one scramble by Emory Jones against what was basically a prevent defense. It’s a testament to Mullen’s genius that he engineered a ten win team and a top ten ranked team in every major poll without the slightest hint of a running game. They got away with it this year due to a veteran wide receiver corps and a highly intelligent dart thrower of a QB, but this offensive line has to step it up next year in the run blocking department.

5: Florida finished the 2019 regular season with a top 10 defense- despite it never being fully healthy. Between Jon Greenard, Jabari Zuniga and CJ Henderson, the injury bug feasted on Florida’s defense throughout the 2019 season. And that doesn’t even count cornerback CJ McWilliams, a presumed starter who missed the whole season. As a result, Florida played one complete game at full strength, its opener against Miami. Nevertheless, the Gators’ defense was dominant enough throughout the season that by shutting down the Seminoles (i.e. limiting FSU to 250 yards of offense), they head into bowl season giving up just 299 yards per game. That’s good enough for tenth in FBS, behind only Buffalo, Michigan, San Diego State, Wisconsin, UAB, Georgia, Utah, Clemson and Ohio State.