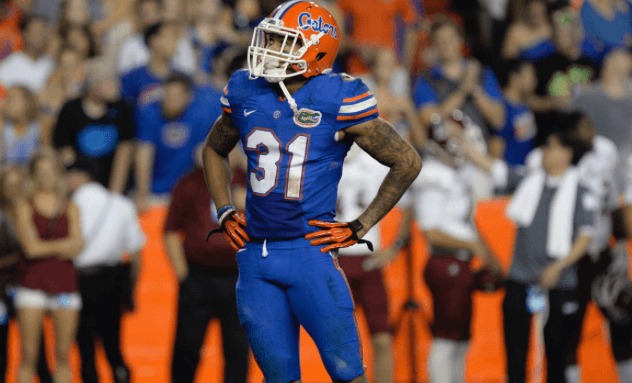 After Jarrad Davis’s selection in the first round of the NFL Draft, four more Gators came off the board last night in rounds two and three.

Safety Marcus Maye was the first to be taken last night, going 39th overall to the New York Jets. Maye is the perfect blend of patient and aggressive, a good tackler while also capable of making the highlight reel play on the next snap. He’s pretty quick to boot, can cover a lot of ground and is good enough in coverage to shut down most receiving tight ends. He can fit a lot of roles in the Meadowlands and appears ready to play right away, and I’ll bet he has at least a ten year NFL career barring injury.

Corner Quincy Wilson went next, 46th overall to the Indianapolis Colts. Wilson may be have the best size/physicality combo of any corner in this draft class. He’s a strong guy by nature (well, and through hard work in the gym) and he complements that with excellent play recognition and a high football IQ. He should learn the NFL game as quickly as anybody and I’d be surprised if he isn’t getting meaningful playing time by midseason. You never want to tout somebody as a Hall of Fame prospect the day they get drafted for obvious reasons, but if you had to pick a cornerback in this draft today to one day be enshrined in Canton, Quincy is as good a pick as any. That’s the potential we’re talking here.

Wilson’s fellow DBU inhabitant, Jalen “Teez” Tabor, then became the fourth Gator to go in this year’s draft, joining Davis with the Detroit Lions with the 53rd overall pick. What separates Tabor from the rest of this year’s DB class is his play recognition. He made a habit of detecting plays before they developed and beating the receiver to the spot at Florida, as one could tell from the three pick sixes he recorded in the last two years. He’s also a tremendously physical corner with top level instincts, and that all adds up to a player that’s NFL ready. Now, he does carry some baggage, namely a pair of suspensions in the last two years, but he was unquestionably a first round talent and hopefully has put all that behind him and is set to launch a long, successful NFL career. Like Wilson, Tabor is a unique talent and has the potential to turn into one of the game’s all time greats.

Rounding out the Day 2 selections was linebacker Alex Anzalone, who went 76th overall (third round) to the New Orleans Saints. Talent has never been the issue with Anzalone. He’s a (gale) force to be reckoned with, particularly against the run, when healthy… which unfortunately was only sporadically during his time at Florida. If he can stay off the injury reports, he could blossom into a star. That’s really the only question with him.

With those five picks, the Gators trail only Ohio State, Michigan, LSU and Alabama for most selections in this year’s draft. And they’re still not done: Caleb Brantley and David Sharpe will probably be picked today, with Joey Ivie and Bryan Cox hoping to join them.